The Land of the Green Man. A Journey Through the Supernatural Landscapes of the British Isles, by Carolyne Larrington 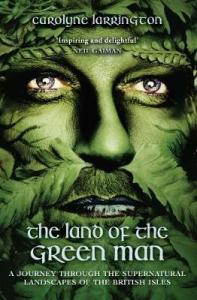 This enchanting, immensely readable book can be read in several ways: it is a vastly entertaining thematic collection of folktales and fairy stories, perfect for autumn reading at a time of fallen leaves, dark evenings, mist and woodsmoke; a field guide to the supernatural creatures that inhabit a parallel world to ours; a literary guide to the supernatural tradition, up to the present day; and a travel guide to supernatural landscapes. It is light, witty and pacy, written for the general reader on a solid foundation of expertise and scholarship.

Carolyne Larrington is Professor of Medieval European Literature at Oxford University, and her works for the general reader (which I must now look out) link literature to legend through various themes. Her latest book is Winter Is Coming. The Medieval World of Game of Thrones. One of the things that most impressed me about The Land of the Green Man is her compelling case for seeing supernatural literature as a continuum, right up to present day and the works of Alan Garner, J K Rowling, Susan Cooper, A S Byatt, among many others, seen not as plundering the tradition, but continuing, developing and keeping it alive. One traditional strand that interests me is touched on only lightly, and that is the emergence of these themes in folksongs – though the Child Ballads are regularly mined as literary sources.

The chapters are thematic, covering landscape, love and lust, death, luck, humans and beasts, and changelings and transformation. The field guide element starts with a map of the supernatural locations in the book – not all remote, but some like Windsor Forest and Alderley Edge lapping the edges of great cities, others unpicturesque and workaday places, such as Burton on Trent with its walking dead, and Tolleshunt d’Arcy in Essex with its monster Black Shuck, a ghostly black dog that has terrorised an innocent cyclist in living memory. The first chapter lays the book’s foundation in the landscape, with tales of monsters and giants who created or formed natural features – who hurl rocks into the sea to form islands, or lie down on the earth to make hills. Giants toss unliftable stones in the air and they land as stone circles. These stones might dance when not observed, or refuse to be counted. Barrows have magical inhabitants and concealed treasure. Sluices are opened and wells carelessly uncapped, and the land is drowned. This is a great start to the book, and an introduction to its sweeping scale, embracing the oral tales clinging to these places, the early writings such as Beowulf, up to the works of Neil Gaiman and A S Byatt.

All the other thematic chapters are structured in the same way, elegantly interweaving oral folktales with collected and written-down sources, and reinterpretations by classic and contemporary writers. Carolyne Larrington lightly touches as she goes on the deep human concerns and preoccupations that might underpin these phenomena and beliefs – fear of death, of poverty, of famine, of losing children, joy of human love, of natural beauty and of plenty. All this is woven into the texture of a book written with a storyteller’s gift and a page-turning pace. A number of sub-themes struck me as a reader – the agency given to so many supernatural females – and human too – is one, and another is the moral framework of the supernatural world we inhabit. Some monsters and hybrid creatures just exist for no discernible reason, and visit meaningless and undeserved pain and terror; but many reward empathy and kindness, or bravery in overcoming disgust or fear (as in the trope of loathly ladies, or handsome young people turned into monsters and freed by a kiss on their foul lips).

The book starts with a promise, and deals a surprise at the end. On the cover and in the title is the Green Man – that powerful symbol of human and tree melded. The Green Man as always depicted emerges in the book only in the final chapter, Continuity and Change, and by the author’s account, it has no deep, hidden, ancient roots. There are no legends; some supernatural creations are green, such as Green Children or The Green Knight; the nearest equivalent woodland creature to interact with humans is my person favourite, the Wodewose, and though wild and forest bound, he is not green. The classic Green Man does not emerge to meet walkers in the woods. It does not steal things or people or give things or shapeshift. The roundel image is known from medieval iconography, mainly in churches, and also as I found to my delight, medieval embroidery. But what the Green Man has done, Carolyne Larrington says, is acquire huge meaning and power for 19th, 20th and 21st century humans, providing a vision of living in the natural world with harmony and mutual care. Which neatly rounds off her survey, telling us that though we can forget the supernatural world and ignore the supernatural landscape, it does not cease to exist and to exert a subtle influence on us.

Reading this book has been a sheer delight – the best book of fairy, ghost and horror stories I have read for a very long time, a thought-provoking study of the enduring power over the imagination of the supernatural, and a subtle study of its effect on our culture and psychological make-up. It is a rapid trip around the subject, leaving me wanting more. You may have a favourite legend that is not here, or only tangentially covered (I was looking for and and didn’t find my beloved Lady Maisery, the Machrel of the Sea, who refused to be changed back to a beautiful girl by her wicked stepmother because she didn’t want to be beholden to her). Sources are in endnotes, and there is a manageable reading list, plus many titles in the text of novels I have neglected to read, to go on my impossibly long reading list. There is a super back-catalogue of Carolyne Larrington’s work to catch up on, too. The only down-side? The realisation that at my age, it will be a life’s work to catch up with Game of Thrones from scratch.

Carolyne Larrington: The Land of the Green Man. A Journey Through the Supernatural Landscapes of the British Isles. Pbk ed. New York, London: I B Tauris, 2017.
ISBN 9781784538484

3 comments on “The Land of the Green Man. A Journey Through the Supernatural Landscapes of the British Isles, by Carolyne Larrington”