Getting to know my father 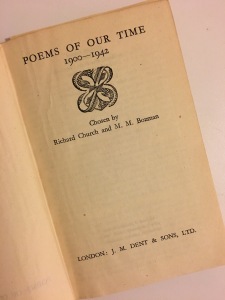 While visiting my mother during the summer, I picked up a book that had belonged to my father, Poems of Our Time. An Everyman edition published in 1945, it was an anthology of British poetry from 1900 to 1942. Although never made explicit, the book can be seen as one of many published throughout the war whose purpose could be summed up as “What we are fighting for.” For example, as part of the Britain in Pictures series, Elizabeth Bowen had written  English Novelists, published in 1942, and Graham Greene, in the same year, had written English Dramatists. Through depictions, descriptions and explanations highlighting the diversity of British culture, a war aim was presented that had nothing to do with military might or imperial right but something less tangible and no less real for that.  The book, therefore, had more of an historic interest for me rather than anything literary or indeed personal, in that it had belonged to my father.

However, the more I read the more I began to struggle to place the book in the context of my knowledge of my father. The personal had forced its way to the front of my reactions and I was struggling to make sense of it. The tone of the anthology was either bucolic (Thomas Hardy, Edward Thomas, W. H. Davies) or mystical (W. B.  Yeats, Robert Graves, Edith Sitwell). In the frontispiece to his Glasgow Encyclopediea (Mainstream Publishing 1994) my father had included a quote from Aristides the Just:

Not houses finely roofed or the stones of walls well built, nor canals or dockyards make the city, but men able to use their opportunities.

My father was not only urban by nature and in his temperament, he was, as a proud citizen of the Shettleston district of Glasgow, concerned with the lives of those who held the metropolis to be home and not the forests and hills of their ancestors. Accounts of corporate fraud, premeditated murder, political agitation, religious hypocrisy  grabbed his interest – not the migration of birds and the turning of the seasons.  A renaissance man of many interests, the only two subjects of which he chose to know nothing were knitting and agriculture. What was he doing reading Hilaire Belloc’s The Early Morning?

The moon on the one hand, the dawn on the other:

The moon is my sister, the dawn is my brother.

The moon on my left and the dawn on my right,

My father bought the book in the summer of 1945. The war in Europe had ended and the war against Japan would end in August. As he did with many of the books he bought, he put his name on it: 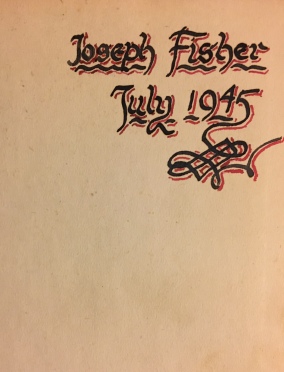 He was nineteen years old and like many young men I think he was a dreamer. When the war began he was fourteen years old and in those five years he had been evacuated to Lockerbie in the Scottish Borders with his brother Robbie (and come back home quickly), collected shrapnel from the streets of Glasgow, been witness to bomb damage in the city, carved and painted war planes out of balsa wood and as a student at the Glasgow Technical College he had trained as an officer cadet. A talented artist, he had, as a child, sketched the streets around his house, friends from school, a steam train at Waverley Station in Edinburgh. Now, he was moving into the metaphysical.

This was written on the back: “Cavernous Stage – Achilles”

This from the man who was going to be an electrical engineer (in the end, it was the maths that got the better of him and not his artistic sensibilities). Like the poems he read in the anthology, there is nothing of the city he knew in these paintings. My mother remembers seeing Polish officers, capes draped casually around their shoulders, swords at their sides, being impossibly gallant in the streets of a city that was one of the main arsenals in Britains’s war effort. My father recorded nothing of this in his paintings. Everything there had come out of his head. At his age, I had bought a copy of T. S. Eliot’s poems and an anthology of John Donne. I was determined that nothing of my life as a child from Lenzie would follow me to my new life at university. Perhaps my father had felt something similar.

I think there was something more though to his choice of poetry. He may have bought this book when he was already a patient in an isolation hospital on the outskirts of the city. A mobile X-Ray unit had visited the college and, as lads do, he decided to join his friends and go along. He was the one called back as they had detected a shadow of his lung. The diagnosis was confirmed: he had TB. In an age before antibiotics, the treatment was bed-rest and a deflated lung. Thus, he found himself in a ward with young men of the same age, the windows open in all weathers, doing what young men do whenever you coop them in confined spaces and that is cause merry hell. Wherever he read the book, he annotated some of the poets’ names. I assume because they were his favourites. I recognised none of them. Of the generation of Auden and MacNiece, he chose instead Christopher Hassall,  A. V. Bowen, Joseph Campbell, Frank Kendon, Ernest Rhys and Helen Spalding. Moons, lovers, buds, carnal pains, beauty and graves filled these poems. He was, after all, a young man. But one stood out from the others and it begins:

The world is sick and we sick men

Listen for feet upon the stair:

And far off when we hear them, when,

We think we hear them, we cry out

With hope and mockery and doubt

And blasphemy and prayer.

These lines are taken from Hospital Ward (Of This Generation) by George Rostrevor Hamilton and it ends:

Have mercy on us sick, O Lord,

Praying and cursing in our ward,

And listening for their tread.

I doubt whether people today read anything of George Rostrevor Hamilton, but something in these words spoke to my father, a long-term patient in an isolation ward. There must have been moments in the long watches of the night when, despite a young man’s belief in his own inmortality, my father must have wondered as to the real meaning of those steps he heard that passed him by in the dark.

It is the curse of adolescence that we believe that no one else has experienced what we are going through. It is inconceivable that our parents would ever have felt anything that we felt as teenagers. Reading these poems and dwelling a little on the events in my father’s life in the final year of the war, has made me realise what an independent and self-contained life he had long before becoming my father.

4 comments on “Getting to know my father”

This entry was posted on November 2, 2017 by CFisher in Entries by Colin, Poetry.