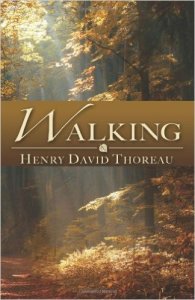 Thoreau is one of America’s quintessential writers. He embodies that independent spirit that is so stereotypical of our image. Not so much in Walden, which could’ve been written by any pond in any country, almost, but more so in his less famous works, such as the one we will talk about today, which was first delivered as a lecture in April 1951 at the Concord Lyceum.
Though it was repeated a number of times on speaking tours, it was published the year after his death by the Atlantic Monthly magazine, which you can read here . From its length, the lecture must have lasted at least 2 or 3 hours, but then people had more patience in the days before remote controls and microwaves. The arc of the lecture is circular, starting out with his own personal reasons for walking, then briefly into the original meaning of long walks(pilgrimages),before moving into the meat of the lecture, which is a two pronged >> of exploration and Nature. He views the march of humanity as ever westward, in search of new soil and vaster skies and forests. This is when he is at his most American, using the famed explorers such as Columbus as examples of how aiming westward is rewarded. “We go eastward to realize history and study the works of art and literature,retracing the steps of the race;we go westward as into the future, with a spirit of enterprise and adventure.” But this is contradictory to his wish to preserve the wilderness. Surely he realizes that all those people moving west into “new soil” will create more of the villages and roads that he laments?
The part I like best is when he expounds on the wonders of Nature (yes, always with a capital ‘N’), describing experiences and sightings, such as a marsh hawk at sunset, with poetic descriptions. He maintains that wilderness is the perfect state and humans benefit from being in it or even by it, such as villages near a woods. He does get a bit carried away by the Noble Savage idea and how close Native Americans and African tribes are to the raw wilderness. But overall, I wish more people had the reverence for Nature as he does, which was remarkable for his times.
Before he ends on a lyrical note, back on a walk near his home, he quotes everyone from Richard Burton, to Vishnu Purana, Confucius and Linnaeus. He mentions slavery(Thoreau was an abolitionist) and women’s rights and marvels at the recent discovery of dinosaur fossils. He concludes with an uplifting tone, bringing his meditation full circle, and we feel as if we have been on a journey with a most inspiring guide.