A Bright Particular Star – The extraordinary life of ‘Kitty’ Queensberry. 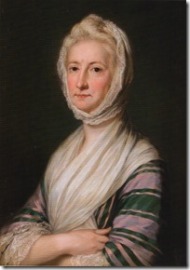 To one side of the fireplace in the White Bedroom at Drumlanrig Castle in Dumfries & Galloway hangs a portrait in an ornate gilded frame. It’s of a simply dressed older woman.  She’s relaxed and very much at ease, both with herself and the artist: her arms are casually crossed as if she’s waiting for something, and the gaze that meets yours is both uncompromising and faintly amused. It’s one of those rare paintings which makes you feel that you’re actually in the room with the sitter, so well has the artist captured their subject – the determined set of the jaw, the obstinately lifted chin and that slight air of resigned sadness which only comes from having lived long and seen much.

The painting is remarkable for two reasons. The first is the artist: Catherine Read – who fled to Europe with her Jacobite family in the wake of the Battle of Culloden but subsequently enjoyed a brief period of success and popularity in England as a society portraitist. The painting at Drumlanrig is a rare survival.

The second is, of course, the subject.

You could be forgiven for assuming that this woman of advancing years was a faithful family retainer or an impoverished relative taken in as an act of charity, so unostentatious is everything about her, but she is in fact Catherine, Duchess of Queensberry, and the woman of whom Horace Walpole once said ‘Thank God the Thames is between me and the Duchess of Queensberry!’. (And anyone who got up Horace Walpole’s nose gets my vote.)

Catherine, who was known throughout her life as ‘Kitty’, was the daughter of Henry, 4th Earl of Clarendon and 2nd Earl of Rochester (no – not THAT 2nd Earl of Rochester, another 2nd Earl of Rochester…) and Jane Leveson-Gower*. Her mother was a famous society beauty and Kitty, brought up in a household frequented by composers, poets and writers like Handel, Matthew Prior, John Gay and Alexander Pope, inherited not only her mother’s looks but also her lively and informed interest in the arts.

It’s Prior who gives us our first glimpse of the woman she was to become, in his best known poem, The Female Phaeton, which is about the sixteen year old Kitty, champing at the bit to be allowed out into Society once her elder sister has married. It starts with the lines …

Thus Kitty, beautiful and young,
And wild as colt untam’d,
Bespoke the fair from whence she sprung,
With little rage inflam’d:

Inflam’d with rage at sad restraint,
Which wise mamma ordain’d;
And sorely vext to play the saint,
Whilst wit and beauty reign’d:

Fondness prevail’d, mamma gave way;
Kitty, at heart’s desire,
Obtain’d the chariot for a day,
And set the world on fire.

Three years after ‘coming out’ she married her second cousin, Charles Douglas, 3rd Duke of Queensberry, who was at that time a Privy Councillor and Lord of the Bedchamber to King George the First. Anyone who had supposed that after her marriage she would quietly settle down to become a good and dutiful wife and mother must have been sadly disappointed, because Kitty Queensberry was as opinionated and strong-willed as she was beautiful and kind-hearted.

Possibly because of her upbringing and the admiration that had been lavished upon her as a child, she disdained personal ornamentation and although she brushed up well when she chose to, preferred to dress very simply, favouring plain dresses, cotton bonnets and aprons. These days, of course, we don’t bat an eyelid at the aristocracy – or even royalty – dressing down in public, but in the 18th Century it was considered positively eccentric.

It was directly because of her highly individual taste in clothes that the wearing of aprons at Court was specifically forbidden – an edict which she cheerfully chose to ignore, resulting one day in a confrontation with the lord-in-waiting, who barred her entrance. Eventually, she simply ripped it off, flung it in his face and flounced into the Royal presence dressed in her peasant’s gown and petticoat – which can scarcely have been considered any better.

In an age when women were considered as little more than ornaments and brood mares, Kitty Queensberry had a mind of her own and the vocabulary to express it, never hesitating to offer her opinion whether it was solicited or not.

Fortunately, she also seems to have been a kindly and generous soul, seldom brought down by low spirits, so for the most part people were prepared to turn a blind eye to what were perceived as her eccentricities. An enthusiastic planter of trees on the Queensberry estates, she loved walking and it was she and her husband Charles who finally completed the beautiful and ambitious gardens at Drumlanrig Castle – started but never finished by the 1st Duke of Queensberry.

They were both great patrons of the arts, and the dramatist and poet John Gay was a particular friend.

Gay is best remembered now as the author of The Beggars Opera – a satirical ballad opera which enjoyed huge success both in London and the provinces. The public at large may have loved it, but others didn’t and when, in 1729, Gay tried to get a licence for the sequel – Polly – which followed the adventures of Polly Peacham in the West Indies, it was refused by the Lord Chamberlain, putatively on the grounds that it was subversive of public morality and encouraged vice. However, the real problem with both The Beggar’s Opera and Polly was that they were actually thinly disguised satires of the ruling classes and ‘Society’ as a whole – and the former, in particular,  had taken specific aim at the Prime Minister, Sir Robert Walpole. Indeed, it’s highly likely that Walpole himself was behind the refusal of a licence.

In the end it didn’t actually do Gay any harm, because he simply published it by private subscription, and the furore surrounding it ensured that it was a best seller anyway because, of course, there is nothing people want to see so much as that which they’ve been told they can’t.

Kitty Queensberry inevitably took up cudgels on Gay’s behalf, soliciting subscriptions at Court, belabouring the Lord Chancellor and even telling the King (by then George II) to his face precisely what she thought of the licence being withheld. It eventually resulted, unsurprisingly, in her being forbidden to appear at Court. When informed by the Vice Chancellor of the decision to ban her, she wrote back to him in a characteristically bolshie fashion:

‘The Duchess of Queensberry is surprised and well pleased that the King hath given her so agreeable a command as to stay from Court, where she never came for diversion, but to bestow a civility on the King and Queen.’ 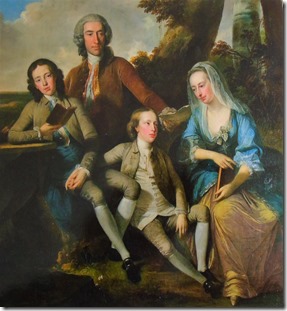 The loyal Duke stood by both his Duchess and his friend and resigned all of his appointments in protest, including that of Vice-Admiral of Scotland.

When John Gay later fell ill, they took him in and cared for him, and he lived with them in London until his death in 1732.

There are many stories of Kitty’s sheer joie de vivre, as well as her kindness and common sense, (along with more than a few of her breathtaking rudeness) but inevitably her life was not all unalloyed happiness. She and Duke Charles had two sons – the traditional ‘heir and a spare’ both of whom grew to happy and healthy adulthood, but neither was destined to outlive their parents. They died within two years of each other, in 1754 and 1756, one in a shooting accident and the other from consumption. Their parents were, inevitably, profoundly affected by their loss – a loss which resulted in the dukedom passing to the black sheep of the family, ‘Old Q’, with disastrous consequences for Drumlanrig (but that’s a whole other story).

Kitty and Charles were eventually forgiven and accepted back at Court, and both lived well into their 70s – a remarkable achievement at a time when the average life expectancy was 35. She died in her 77th year after a short illness caused by, if Horace Walpole is to be believed, a surfeit of cherries. Eccentric even unto death.

But in the end, even curmudgeonly old Horace was won over by her. She had continued into old age as beautiful and outrageous in her 70s as she had been from the start, undiminished by life, loss or the passage of time – prompting him to add an extra verse to Prior’s poem:

‘To many a Kitty, Love his car
Would for a day engage;
But Prior’s Kitty, ever young,
Obtained it for an age.’

And what of her gentle and kindly Duke? He survived her by just a year, dying in 1778 following an accident ‘alighting from a carriage’ and was interred with his remarkable Duchess in the much be-marbled family vault at Durisdeer, near Drumlanrig Castle.

Catherine, Duchess of Queensberry was born into a life of privilege in an age when women were considered property and not expected to think for themselves. In spite of that, she was compassionate, funny and as sharp as a tack. That she so defiantly and for so long ploughed her own furrow, almost completely unfettered, is a tribute not only to her but also to her husband, with whom she had such an enduring and loving union.

So, if you ever find yourself on the guided tour at Drumlanrig Castle, make a point of pausing by that small portrait in the White Bedroom to remember both the woman who once told a king precisely what he could do with his Court and the man who had the courage to let her be herself.

* Pronounced Loosen-Gore. Really. It is.

(Illustrations: Kitty Queensberry by Catherine Read. The Duke and Duchess of Queensberry with their sons Henry, Earl of Drumlanrig and Lord Charles Douglas by George Knapton. Both photographs by Richard Shellabear.)

2 comments on “A Bright Particular Star – The extraordinary life of ‘Kitty’ Queensberry.”

This entry was posted on June 14, 2017 by Moira in Entries by Moira, Non-fiction, Non-fiction: history and tagged Buccleuch and Queensberry, Drumlanrig Castle, John Gay.