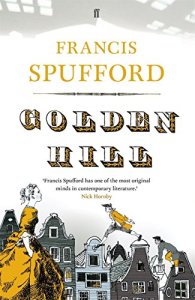 This is the first monthly new novelist in my challenge for 2017, and so far, so very good indeed! Golden Hill is a historical novel, set in an unfamiliar period (the reign of George II) and an unfamiliar place (the emerging city of New York), so that is a great start for me. The author’s back catalogue is filled with non-fiction (for example The Back Room Boys, and I May Be some Time); the hallmark of his books is such strong narrative drive and story-teling skill that making the transition to fiction with him is tempting, and certainly pays off.

The hero is a mysterious young man, Richard Smith, who disembarks from a ship from England to New York in late 1746. He bears a document, a financial instrument that he immediately tries to convert to ready money, which makes him the instant focus for lively curiosity in that tiny town, at that time 100 times smaller than London. The piece of paper could make him a very rich man or be totally fraudulent, and the confirmation of the one or the other is following him slowly across the ocean. While he waits for his proof to arrive, he plunges into life in a New York that is inventing itself in all its aspects, civilised and grisly. The eyes of everyone are upon him, waiting to find out if he is what he says he is, a man with lawfully acquired riches, and a purpose he will reveal only when he gets his hands on them.

On the way to the denouement, his adventures come thick and fast, tumbling over themselves on the page. Through them all, he comports himself as an 18th century fictional hero would, an attractive innocent, trailing charm, chaos, tragedy and redemption, making friends and enemies. These characters and their world are original and convincing; yet there is a fairy-tale atmosphere in the novel in Smith’s unaccountable good luck, born of the fact that curiosity and honour seem get the better of any instinct to destroy him and make him vanish. Revelations are brilliantly held back, and only at the end could this reader see the trail that has been laid. Francis Spufford has chosen a suitably archaic idiom for his narrative, taking care that it does not hold up the reader in the headlong progress of the plot, but adds to the atmosphere of the novel’s world. Interpolated letters bring in back-story – these are written in a stronger pastiche of 18th century idiom, which did not work so well for me.

What do I love about this novel? First of all, there is so much to learn. For instance, I am a nerdy sucker for financial archaeology, and in this novel Spufford gives me as much pleasure as Trollope does, in explaining the rudimentary mechanics of financial exchange and the weird and strange varieties of currency and barter that passed at that time. New York has at this time a tiny toehold on the American continent, a colony of the Crown, but with a mind of its own. Its Dutch roots are still showing, commerce binding its Dutch and British inhabitants together. The depiction of a New York of 7000 souls, stripping the huge city back to a vanished miniature double of Amsterdam in its natural landscape, is so vivid I could see it, feel it and hear it, including the light, and the (very cold) weather. The research that has gone into this novel must have been prodigious, but it is lightly worn. Into this tiny colonial backwater Richard Smith has brought with him a taste of the London fashionable world, of dancing and theatre, that excite and intrigue his new companions but lead to misunderstanding and conflict. Yet I loved the fairy-tale aspect of his narrow escapes from certain disasters. Finally, if there could be a Good Sex award to go with the Bad one, I would nominate this novel for it (though I do know how much a matter of personal taste it is). The moral for me is: no need to attempt anything outrageously new and crazily different to describe pleasure – not if you write sex this well.

I’m so happy that my 2017 resolution started on such a brilliant note! Much more likely now that I may stick with it (I confess now I’m lousy at keeping resolutions). This novel is up for the Costa First Novel award. In my view, it richly deserves its nomination. I loved it, and am sure I will read it again, for new and different reasons. It is one of those novels where the initial delights lie in clever plotting and secrets withheld, but which has many layers of richness that will bear discovery through repeated reading. Finally, what a gorgeous cover!