The Returning Tide by Liz Fenwick 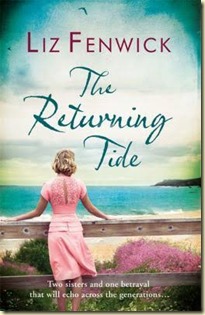 In her 1912 novel The Reef , Edith Wharton – that uncomfortably shrewd observer of the human condition – produced one of the finest descriptions of ‘life’ I’ve ever read. It is, her character George Darrow says, ‘just a perpetual piecing together of broken bits’.

A multi-layered and multi-generational story of love and honour set against the turmoil of the Second World War, it has at its heart  two very different sisters – Elle and Amelia – whose lives are changed irrevocably by a world conflict which bulldozed everyday life while simultaneously throwing into sharp relief the need to live for the moment – because that moment might be all there was.

A book which includes five romances and two weddings (with two more implied) might reasonably be expected to fall obediently into the ‘romantic’ category, but Liz Fenwick has increasingly been defying the artistically restrictive straitjacket of ‘genre’ with the result that in her books you can never be absolutely certain that there’s going to be a ‘happy ever after’.

In her previous book – Under a Cornish Sky –  she embedded the story of a difficult and single-minded older woman within the framework of a more conventional romance. Here, she uses a similar technique, but the framing narrative – although still carrying several important strands of the story – fades increasingly into the background as we’re drawn into the vividly delineated world of Fortress Britain in a world at war.

The double time-line of The Returning Tide, which segues seamlessly between the 1940s and the present day, takes us to Cape Cod, London and Portland in Dorset; but as always with Liz Fenwick’s books, Cornwall is the main location, and even when the action is taking place elsewhere, it is Windward – Elle and Amelia’s family home at Mawnan Smith – to which we and they are continually drawn. It’s always there, in the background, waiting …

By a third of the way through the book I knew pretty much where it was heading, and felt just a twinge  of disappointment at being able to work it out so easily. I should, however, have had more faith in the writer, for not only was I soon absorbed by memorable descriptions of the south coast of  England under siege and a crucial military exercise that went terribly wrong, but it also quickly became obvious that when it came to the personal stories of the central characters it wasn’t the what  or even the how  that actually mattered. What mattered was the ‘why’ and – most importantly – the devastating emotional consequences that trailed in its wake … and it was those that  kept me reading until 3 o’clock in the morning.

It’s difficult to say much more about The Returning Tide  without giving far too much away: there is love, there is war, there is loss and heartbreak and simple  decency – but above all of these there is the extraordinary human capacity for picking ourselves up and carrying on … that perpetual piecing together of broken bits.

2 comments on “The Returning Tide by Liz Fenwick”