Yesterday, the publishing world was stunned by the news of the sudden death of Carole Blake, co-founder of the Literary Agency Blake Friedmann and author of the perennial best seller, ‘From Pitch to Publication’.

We asked one of the many writers she represented – Liz Fenwick – for her memories of one of the publishing industry’s titans: 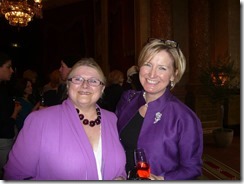 As I write this I’m struggling to believe that a woman of such vitality as Carole isn’t here any more. The world is a lesser place for her loss. She is also someone who is hard to write about without using superlatives – and I can hear her voice in my head, editing me.

But I have to say that she was so vibrant, so loving, so fierce and so passionate, I can’t believe all that energy is gone – and gone far too soon. She had only just celebrated her seventieth birthday.

The facts of her life were that she began in publishing when she was seventeen years old and worked through many roles until she founded Blake Friedmann with her then husband, Julian. A few years ago she celebrated fifty years in the industry with the party to end all parties (and she did love a good party!).

Publishing was her world and her passion, for she loved books. Those of us who knew her on Facebook would wait for the weekly review of all the books she had purchased. Her beautiful flat was already groaning at the seams with previous purchases but Carole’s appetite for books was almost as great as her love for life … and shoes, and beautiful jewellery. (And I mustn’t forget gin in ‘home measures’.)

Like many other people, my friendship with Carole began on Twitter. I was tweeting from the Romantic Novelists’ Association conference in Penrith. We were having dinner at a pub called the Boot and Shoe and she tweeted that if it had been called the Book and Shoe it would be the perfect home for the RNA. A great friendship began talking books, shoes and wine. I never dared hope that she would one day become my agent for she was THE Carole Blake, agent extraordinaire, and I kept pinching myself to make sure I wasn’t dreaming that she was my friend.

Of course this gave us both a more than a moment’s pause when I did submit to her – which she wanted me to because she would hate to miss out on something. I’d sent the book to several other agents at the same time and found myself consulting that ‘bloody book’ of hers (the way she always referred to From Pitch to Publication) to find out how to handle the situation where I’d received a request for a full manuscript from one agent just hours after submitting. Her book didn’t tell me, so I emailed her, asking as a friend and not a potential client, what I should do. The series of emails that went back and forth still makes me smile. And I loved hearing her tell the story.

But it highlighted something very special about Carole. She was an amazing friend who could keep business separate. I was lucky enough to be both a friend and a client.

Recently, when she discovered her cancer diagnosis, she was more concerned for me than herself, wanting to let me know because I had just lost my father. Our subsequent chat was all about her worry for me – and that summed her up. Carole cared.

Whether she planned it or not she was also a teacher – in so many ways. She taught courses in publishing, in all her many talks, in her ‘bloody book’, in her dealings with unpublished writers and in her hilarious tweets about the slush pile … She had a huge desire to help, to teach, to encourage.

I remember my first publishing lunch when I was meeting my then editor Kate Mills for the time. I was terrified, but Carole was in her element guiding and teaching me. Over lunch Kate and Carole disagreed strongly about something in The Cornish House. I sat there speechless as they went head to head. In that moment, it became clear it was no longer just my book but that others were invested in it. It also became clear that you could have that type of discussion with an editor. After lunch I raised this with Carole. She grinned and said she wanted me to know I didn’t have to agree to everything with an editor … ‘It’s your book after all …’

She was my mentor and guide countless times in those early days when the publishing industry was a total mystery to me. She answered many questions and was totally honest about every situation (even if it was bad news), talked me out of  pits of despair, verbally slapped me across the face, told me to get a grip, encouraged me onwards and sold my own books back to me when I had worked with them so much I hated them to the core.

In her ‘bloody book’, From Pitch to Publication she described an agent’s role as being both a pimp and nanny – meaning maximising the sales of the writers’ work and looking after them in contract deals. She did all of this and more. She genuinely liked her clients, and I think I can speak for them all when I say we are devastated to lose our personal champion.

The publishing world has lost theirs as well, for Carole lived and breathed publishing. She gave it her all and, as is not always the case, that wasn’t just 100% – it was amplified by the huge personality emanating from her small figure. Nothing was ever going to hold Carole back and what is wonderful is that she did it all without ever losing the essential goodness that made her who she was.

This entry was posted on October 27, 2016 by Moira in Uncategorized and tagged Blake Friedmann, Carole Blake, liz fenwick, RNA.