The Art of Grace by Sarah L Kaufman 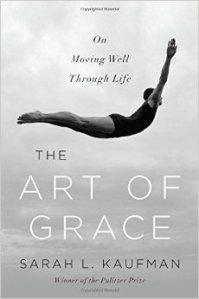 It’s probably an unfortunate coincidence that when I read Sarah Kaufman’s book, the weather took a turn for the better. Taking the turn for the better during a Norwegian winter means that the temperature rises from fricking freezing to not so fricking freezing. As there is always snow in Norway during the winter (at least in the part of it we live in) a rise in temperature from cold-enough-to-freeze-the-balls-off-a-brass-monkey to cold-enough-to-seriously-discomfort-but-not-maim-the-monkey has the effect of melting some of that snow. Snow which melts during a Norwegian winter usually turns to ice. Of which more later.

The thesis behind Kaufman’s book is simple. Kaufman, the dance critic for The Washington Post has made a career from studying the art of grace. She knows much about movement: what makes it pleasing to the eye and how we as an audience respond to that pleasure. In The Art of Grace she condenses what she has learned into an appeal for grace to take a bigger place in our everyday lives. We’ve become obsessed with feats of strength, with speed, with measurable achievement, she says, but refocusing on living with elegance, composure and efficiency can reap rich rewards. Using examples from entertainment, sport, medicine and, of course, dance, she spotlights individuals who epitomize the life of grace: Cary Grant, Joe DiMaggio, Margot Fonteyn – all of these people give the rest of us an example of how grace works in practice. Yes, all of them might have had private lives which had their chaotic moments, but all of them also excelled at making grace look easy, almost effortless. Years of practice might have gone into that effortlessness, but the end result was worth the work.

Probably Kaufman’s best example of grace in action, is Cary Grant, who overcame the kind of childhood which sounds like it would provide the perfect fodder for a movie on Lifetime Network. Grant, whose mother suffered from clinical depression, was put in the care of a dancing troupe at the age of six by his alcoholic father. For years, Grant believed his mother had died, only to discover at the age of thirty one that his Dad had put her in an institution and decided to set up home with a new wife (history doesn’t record if he bothered to dissolve his previous marriage first). Bringing his existing son to this new relationship must have seemed too complicated, so Grant Sr decided his son should join the circus instead. Clearly, Elias Leach wasn’t going to win any prizes as Father of the Year, but if his unhappy start affected young Archie Leach, later Cary Grant, he didn’t let that show, at least not in public. Grant went on to become an vaudevillian, eventually touring the US and making the jump to movies in the early 30s. Biographers credit his success as a film actor to his early physical training. It taught him expressiveness, timing and teamwork, but the key to Grant’s charm, Kaufman points out, is his inability to take himself too seriously. Physical grace is a starting point, but living gracefully means transposing elegant comportment into how we treat other people. In addition to moving well, Grant had a knack for putting people at ease, for behaving decently in social situations despite his fame and the power it brought him. We can learn from this says Kaufman. Attention to how we move physically, through yoga for example, or Tai Chi, or dance classes, can help us navigate the rest of our lives with composure and empathy to the needs of others. Physical grace becomes social grace. Simple as that.

But let’s get back to that ice. Buoyed by reading about how learning to move well might form the beginning of improvements in every other aspect of my life, I decided to put Kaufman’s ideas about the benefits of regular physical activity into practice by taking my dogs for a walk. With visions of Margot Fonteyn as the lead in Giselle floating through my brain, I stepped out into the garden. Onto the ice. The pratfall I then performed would probably have taken its place in the Pratfall Hall of Fame if anyone had been around to capture it on film. It was Pratzilla. Pratocalypse. Revenge of the Killer Pratfall, a Force Ten Pratfall from Navarone. This was a pratfall of such intensity that from initial slide to hitting the ground flat on my back took about thirty, horrible seconds. I lay on the ground, visions of ballerinas replaced by a circle of small tweeting birds and realized after a couple of minutes and with relief that I was not dead. One of my dogs came over and gently licked my ear. When my brain had reverted to full consciousness, my fractured neurons managed to produce a coherent thought. And the thought was this. Where’s your #¤%& Cary Grant now Sarah Kaufman?!

Because here’s the problem with The Art of Grace. However seductive the idea that we can all learn to move as well as Grant or Fonteyn or DiMaggio, the brutal truth is that the vast majority of us never will. There are benefits to physical activities like yoga and Tai Chi, but whether these actually help those that practice them in broader ways is very much speculation. Yes, we would all benefit from learning how to approach life with the feelings of others in focus, but I’m not sure we’re going to get that from early exposure to ballet. This is a lovely book and beautifully written. I enjoyed reading every word of it. I recommend it to you all warmly. But the next time the weather warms up during a Norwegian winter, I’m putting my spiked boots on before I step out onto the ice.

One comment on “The Art of Grace by Sarah L Kaufman”

This entry was posted on February 22, 2016 by cathmurphy in Entries by Cath, Non-fiction: philosophy, Uncategorized and tagged Cary Grant, dance, Sarah L Kaufman, The Art of Grace.