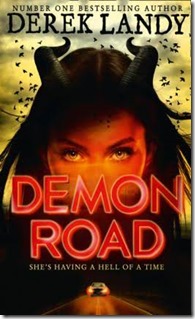 Demon Road is the first volume in a new Young Adult series, by Derek Landy, following on from his popular Skulduggery Pleasant series. This new line, (also called Demon Road) continues with Desolation which will be published this year.
Like the Skulduggery books, this one has as its protagonist a very young woman. Amber is slightly older than Stephanie, but at sixteen, she is still under the aegis of school and her parents, or she would be if the latter took any interest in her. They are not openly cruel, they are just not fully present. Shortly after her sixteenth birthday, Amber learns why. The reader gets a heads-up long before Amber does, with the book’s first chilling line:

Twelve hours before Amber Lamont’s parents tried to kill her, she was sitting between them in the principal’s office …

The discovery that there is nothing remotely normal about her life forces Amber to go on the run with Milo, who is also not all he seems. Whereas the Skulduggery books were set in Ireland, Demon Road starts in Florida and progresses to a road trip through the United States.

The open roads, huge distances and the young girl on the lam with a decidedly dubious older man will give many mature readers a distinct Nabokovian chill. Given Derek Landy’s empathy with teenage girls, it would be a surprise if this angle hadn’t occurred to him. Amber Lamont’s domestic situation, like that of Dolores Haze, is anything but healthy; both girls are, in fact, a reproach to complacent attitudes about family life. Young readers might miss the literary allusions, but understand this powerful, underlying point.

Lolita references aside, this is quite a violent book in a way that many adult readers will find uncomfortable. It’s full of visceral descriptions of horrible, gory deaths of both humans and those who aren’t. They are shot, stabbed, sliced, eviscerated, burned to death and eaten alive and in the best tradition of YA fiction, they don’t all have it coming. This isn’t a warning against it for its target readership; they will love it. However, older readers might have to put their grown-up sensibilities to one side if they are to enjoy the narrative.

Landy takes the familiar theme of growing up and finding one’s place in the world and ups the stakes in a way that will be very familiar to readers of YA and fantasy fiction. However, this new series looks to have more in common with Darren Shan’s Demontata books than, for example, Harry Potter or Landy’s own Skulduggery series. Landy accomplishes what he does by offering what he thinks his young  readers will like, rather than what their elders approve of. Those adult readers who regard a writer’s integrity as central to good writing, will, as I was, be won over.