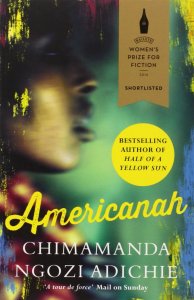 I wasn’t particularly excited when my book group suggested that we read Americanah (2013) by Chimamanda Ngozi Adichie; I had heard good things about it, but its length and modernity were off-putting to me. Indeed, its very popularity was a bit of a turn-off. I vented a little on Twitter, and VL’s very own The Other Kirsty was one of the people who assured me that I would enjoy it, and not even notice the length. She was, of course, right.

The novel starts with Ifemelu going to find an African hairdressers in America. I could have read this scene for the whole book, honestly – and, in fact, it makes several reappearances as the book progresses. She has a fellowship at Princeton, and ‘her papers’, both of which put her at some distance from the African women braiding her hair – yet there is still a unity between them, whether or not they share her homeland of Nigeria; a unity she isn’t entirely happy about (she has no wish to meet the hairdresser’s boyfriends to persuade them to propose, or to share takeaway food in the middle of her appointment) but understands. And I learnt so much about hair-braiding techniques, and the length of time (six hours!) that they take to create.

In the middle of this scene a gauche white woman walks in to get her hair braided, not understanding how it works and trying too hard to show an appreciation for Africa. If this is a mirror up to the white reader, then I feel a little embarrassed. Truth be told, Americanah revealed to me how ignorant I am – but also helped inform me a lot. Much of the novel is taken with showing the differences faced by African-Americans and American-Africans (as Ifemelu puts it); that is, black people raised in Africa who now live in America, and black people raised in America. As Ifemelu also puts it – though I paraphrase – the former might be the grandchild of a mayor, while the latter’s grandmother wouldn’t have been allowed to vote. Race, Ifemelu writes, doesn’t really exist in Nigeria: she had never really thought of herself as black before she moved to the US. This whole topic had never really occurred to me, and it was fascinating to read about – without feeling too didactic.

Chimamanda Ngozi Adichie doesn’t feel didactic, that is; Ifemelu very much is. Not only is she straight-talking and a little rude and brittle at times in everyday conversation, she also writes a blog about race. It is called Raceteenth, which feels like it should be a pun, only I don’t get it – as it is, it just seems a very ugly word. As with all bloggers in literature, and unlike the majority of us in real life, she becomes successful, famous, and makes a living from the venture – so she is a speaker at many events, visits schools, so on and so forth.

Parallel to her life in America is that of Obinze, her high school boyfriend who made the journey, instead, to the UK – and had to work under an assumed identity. Most of the novel compares two cultures I can only observe as an outsider, American and Nigerian, so it was fun to have some England thrown into the mix – and she certainly captured the tone of the various echelons well. I particularly liked the van drivers Obinze worked alongside, and how friendly and genuine they were; no lazy stereotypes about racist working-class Brits here.

Americanah is such a rich and complex novel that writing about the plot is fairly pointless. There are so many more memorable characters – Ifemelu’s various boyfriends, for example, including a couple really lovable guys who are probably better off without her, and Obinze’s delight of a mother (more liberal than Ifemelu’s, and someone who helps introduce her to literature). In some ways, there is a long plot of Ifemelu and Obinze finding their way back to each other (or not) as both return to Nigeria, but this is not the way the reader is drawn through the novel. Indeed, the ending felt the weakest part, because it was focused too much on concluding something that felt too broad and detailed to be concluded.

Americanah, surprisingly, reminded me most of the Victorian novel. It is long and involved, but the structure is loose and all-encompassing. Events happen, people and places and observed, reactions are described and emotions explored, but all seem simply to be part of a full picture rather than a linear plot. The reader is completely immersed in this world. I barely thought about whether characters were likeable or not, or even what I wanted to happen to them; they were real, and what would happen would simply happen because they felt real. It’s a great achievement.

So, if you normally steer clear of modern fiction, you may well want to make an exception for this novel. I learnt so much but, more importantly, I fell deep into a narrative. And I have a new appreciation for hair.

This entry was posted on January 20, 2016 by Simon T in Entries by Simon, Fiction: 21st Century and tagged Americanah, Chimamanda Ngozi Adichie.