What I Read on Christmas Break 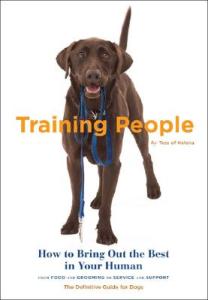 Like many avid readers, I always have at least one book on tap, no matter what else is going on. So, just because the Foxes were not posting over the Christmas holidays, doesn’t mean we weren’t reading. Since holidays are rather quiet at my house, I had plenty of time to indulge and I thought it might be fun to share some of my choices.

My favorite read over the break was probably Training People by Tess of Helena, a handsome labrador. Written from a dog’s point of view, it is laid out like a regular training manual, only for dogs training humans instead of the other way around. Definitely not cutesy, it had a serious tone and used technical terms such as “horizontal tail movement” and “paw pull”. Many color photographs illustrated suggested techniques and I really wish the whole thing would’ve been longer.

Food is a large component of any celebration, which is maybe why I thought a book about cooking might be fitting. The Reach of a Chef by Michael Ruhlman is an exploration of how chefs have reached celebrity status in America today. The author, a Clevelander with culinary training himself, charts how changes in society and media has provided a platform for food and its makers to stars of the stature of fashion designers or pop singers. He travels from one end of the U.S. to the other, with many stops in between to visit the chefs and restaurants that are most trendy and influential. These vary from a country restaurant which farms its own produce and protein, to another venue which presents food as art, including a tasting menu whose full performance takes nearly 4 hours.I was amazed at the many different ways food can be prepared and served when it becomes fashion and not functional.

I’ve complained about Felix Francis before, so I don’t know why I keep reading his books, but Front Runner actually shows a lot of improvement. There’s still too many asides with lengthy explanations, but there’s actually a pretty good mystery in this one and for the most part, he’s stopped trying to channel Philip Marlowe. The female characters are still not developed much, and he uses way too many Americanisms for a character who supposedly is a British speaker, but the main story is quite decent and leaves the reader to focus more on the whodunit part, rather than the pale representation of his father’s name.

A book which had the opposite effect was Christmas Bells by Jennifer Chiaverini. I was looking forward to learning more about Longfellow and the poem that was turned into a Christmas carol, but was disappointed by the modern story paired with the biographical part. It was of a small town children’s choir who was practicing the carol for a holiday church service. Each chapter of this story line was from a different character, but all of them centered on a particular night of choir practice. The focus on a single night soon grew tedious, especially since each narrative did not move the story forward, so there was a sense of spinning wheels. The Longfellow sections made some progress, but there were so many family tragedies that it became overwhelmingly depressing and I was forced to give up on it just to save my sanity 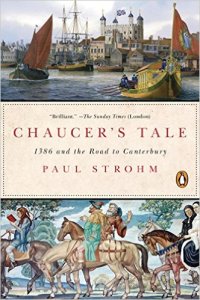 Another famous author was the subject of Chaucer’s Tale by Paul Strohm, who used contemporary documents to show that writing was only a small part of a very busy life that Chaucer led. He was a wool inspector in London, held a seat in Parliament briefly and travelled widely as a diplomat. He had political connections through his wife’s family and his own efforts. Rohm gives us a very detailed look at Chaucer’s life, in some ways it’s a little too thorough for the general reader. I was really surprised at how much information was available for someone living in that era, which was due to Chaucer’s long career as a public servant.

So there you have the books I was reading in between wrapping gifts and putting up decorations. For me, the holidays are often unsettling and I’m glad to have the routine of reading as a reassurance.

2 comments on “What I Read on Christmas Break”