Hand Me Down World by Lloyd Jones 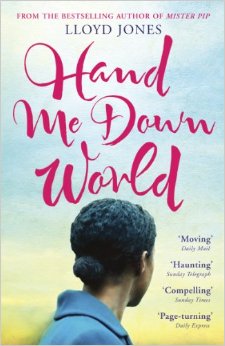 Along with millions of others, I have been reading about the current refugee crisis with a mixture of sadness and deep frustration that these people are having to suffer as they are. As we see footage of people of all ages being crammed into unsuitable boats in their sheer desperation to get away from their war-torn home, I was reminded of a novel I read a few years ago, Hand Me Down World by Lloyd Jones (the author best known for another excellent novel, Mister Pip).

Ines works at a hotel in Tunisia where she has a brief relationship with a guest, Jermayne, which results in pregnancy. A son is born and for a time Jermayne comes back and forth between his home in Germany and Tunisia. One day, though, he tricks Ines into signing some papers written in German (and therefore illegible to her) and takes the boy back to Berlin. Hand Me Down World is the story of Ines trying to get to Berlin, and her son.

The structure of the novel was one of my favourite things about it because it was so very effective. Although the whole novel is told in the first person, we don’t actually hear from Ines herself until the last third of the book. Instead we hear from the various people who encountered and/or helped Ines during her journey. As the story is handed on from one person to the next, so is Ines, and for much of the time we see only fragments of her. She is, then, a ‘lost’ person in two ways: in an individual way, she is lost until she can find her son. Her son is the one thing that keeps her going through some awful circumstances. But in a larger sense, she is a lost person in terms of migration. Out of sheer desperation she has been smuggled into Europe and therefore loses her status as an ‘official’ person. Instead she must blend into the background and not be noticed while she finds her way to Berlin.

“The boat she paid for stank of fish. She says she never saw the pilot. There were crew. A few men, always had their backs turned to her and the others. There must have been a pilot. She never saw his face. It was at night and it was hard to know exactly how many of them there were. Cargo doesn’t ever stop to think to count.”

Hand Me Down World is a novel with real emotional punch, and at times I could barely read it (the chapter with the lorry driver particularly springs to mind). But as well as Ines’s own sad story, the book has much to say about ‘lost people’ as they try and make sense of their lives when things are taken out of their own control. They are ‘cargo’, they lose their humanity in the eyes of others, even though Ines is absolutely full of the stuff. It is that most human of things – the tie between parent and child – that has made her suffer all this in the first place.

It reminds us every time we see pictures of people hiding in boats and lorries on the news that these are real people with real feelings and real desperation to find safety, shelter, and a better life.

3 comments on “Hand Me Down World by Lloyd Jones”