Grantchester: from page to screen

(There may well be SPOILERS here, for the books and the recent TV series.)

Well, this phenomenon crept up on me. I was looking for something new and different to watch on TV, and stumbled upon ITV’s new period crime series.

Grantchester the series is set in and around Cambridge, in the early 50s, and features an Anglican vicar-sleuth. Crafted especially with me in mind, I thought, and so it proved. I had not come across the books, so I started to watch the series first, without much expectation, as I have the tendency (I do know) to be very picky over recent period drama, and spend far too much time shouting at the screen over anomalies and anachronisms, the wrong sort of car, the unlikely turn of phrase, the untimely habit of thought. But this series (even though not devoid of some of these moments, and I shall return to this) disarmed reproof, with its attention to detail, excellent scripts, well-crafted and original plots and beautifully (in all senses) realised characters. Yes, Cambridge was turning into the murder capital of East Anglia, doubtless picking up where Morse left off in making concerned families wonder if their treasured offspring should be trusted to the ancient universities – but the setting and the period were unobtrusively revealed, with the shadow of the second world war (both world wars, in fact) subtly present. The two detectives, Canon Sidney Chambers, vicar of Grantchester, and Inspector Geordie Keating of the Cambridge Constabulary are an odd couple, but their relationship, forged over backgammon and beer, is made entirely believable by the actors and the scripts.

I might well have gone on to read the books anyhow, but they turned into (very pleasurable) homework when I found out about a literary event in London – James Runcie the author of the books and Daisy Coulam the writer of the scripts, in conversation at the gorgeous Georgian headquarters of Bloomsbury Publishing in London. The deal included choice of the first two books in paperback, or the new one in hardback, I chose the former and read them the preceding week. This proved a slightly disconcerting experience, as book Sidney and Geordie did not quite match their TV equivalents in charisma or glamour – on the other hand, the texts were more thoughtful, more layered, and enjoyably allusive. How fortunate to be reading them in preparation for finding out more about this odd reverse sensation for me of seeing TV characters translated to the page – I would not be left with a mind full of unanswered questions.

The three Grantchester novels published so far form part of an extended project, I now discover, intended to span the years between the coronation in 1953 and the wedding of Prince Charles to Lady Diana Spencer in 1981, as reflected in the life of the Vicar of Grantchester. There are three more to come. This is my lifetime, from babyhood to being just about grown-up, so I am now completely engaged. The character of Canon Sidney Chambers is inspired by the author’s late father, the Rt Rev Robert Runcie, former Archbishop of Canterbury, who like his fictional alter ego fought in the second world war as a tank commander winning the MC, and carried his wartime experience into his ministry. Sidney loves cricket, George Herbert (good man), whisky and hot jazz, and he has trouble with women (plural, the cause of some mild shouting at the TV screen on my part). Each of the novels is a layered creation, on one level a series of crimes to be solved, on another the unfolding of the setting and the development of the characters and their relationships, and I am delighted that there are nearly 20 more years to come.

The event, with its conversation, revealed much about the process of crafting a TV script out of a work of fiction. James Runcie has a background in TV, as a producer and director – I first noticed him, and have followed him since, as 20 years ago he created a memorable documentary on Barbara Pym, so his good taste was already a legend to me – coming from this world into authorship, he was entirely prepared for, if not always entirely content with, the decisions made by the creative team. I had assumed (on no knowledge at all) that the first Grantchester novel had been published, then discovered and optioned for TV – but no, Diederick Santer’s production company Lovely Day had seen it and expressed an interest before it was published. Daisy Coulam took on the task of writing the scripts, so Grantchester in fact has a strong Eastenders pedigree (not my taste in viewing, but another illustration, if any were needed, of what an incredible proving ground it is for creative TV talent). So, the development of the scripts happened in parallel to the writing of the second and third books. My reading of the second novel makes me think that this has possibly been a creative and dynamic process on both sides, as I feel that the book Sidney and Geordie and their TV equivalents are converging. Certainly, from now on, they are bound to be interrelated.

Once commissioned, the writing for the TV series is in the hands of the scriptwriter, who has a distinct set of creative goals in crafting an hour of visually and dramatically engaging TV from the pages of a novel. Daisy Coulam certainly knows her business, finding a new dimension of warmth and emotion between the four main characters: Sidney, Geordie, Leonard and Mrs Macguire, and a winning contrast in the personalities of the two women in Sidney’s life, Amanda and Hildegard. A major challenge was that the TV series is a murder mystery, and not all Sidney’s dilemmas involve death, so some new situations had to be crafted. There were smaller matters too. Characters’ names may not work when spoken out loud, for instance, so the Revd Leonard Graham becomes the Revd Leonard Finch. I have no idea why, but aurally this was a good call. While some characters have to be simplified (naturally, the TV scripts are light on the descriptions of Anglican tradition and the theological reflections that give me so much pleasure in the books – also, we no longer see anything of Sidney’s other life as a fellow of Corpus Christi), others are given more depth: the standard issue charlady of the books, Mrs MacGuire, turns into a judgemental, hoovering Bunter to Sidney’s Wimsey, protecting him and making his irregular life possible while telling him exactly what she thinks of it (fabulous work by Tessa Peake-Jones, who almost reconciles me to the career path for women actors from beautiful young heroine to Woman who Does); Geordie’s family life gets more airtime (which makes me even more sorry to see the back of Sidney’s college life).

It must have made a huge difference to the author to see the lead characters embodied, by actors James Norton and Robson Green. Robson Green was in mind from the beginning, James Norton was not in mind, but a marvellous bonus, available to take a path from disturbed and disturbing psychopath in Happy Valley, to something completely different. In particular, although Sidney Chambers’s good looks are a matter of moment in the books, it is something of a revelation to see him capable of stepping, unrehearsed, out of some particularly rich and gorgeous renaissance painting of the Annunciation into the role, in full Archangel Gabriel mode. These are not the looks that the author has given him, but I find I can make myself content with that. But Sidney is no archangel, and his screen version is given a wider gap to bridge than the book version. Even if the last word on the script goes to the scriptwriter Daisy Coulam, James Runcie was a collaborative presence, aware of the changes to situations and characters that were proposed to make his creation work on screen. He ruefully spoke however of taking issue over two matters. Sidney drinks just a little bit too much on screen, he thinks. And in one episode, his trouble with women tips him into a scandalous situation, that, James Runcie says, ‘Wouldn’t have happened’ (the scandal is then compounded, not once, but twice, in my humble opinion, but that is the subject for a cosy, spoiler-filled, heated argument). I was so tickled to find out that someone else also finds those words rising unbidden when something anachronistic, inappropriate or just plain Wrong pops up in a TV drama. ‘Wouldn’t have happened!’ I yell at the screen.

It was so enjoyable and enlightening to hear two writers talk about how a novel is crafted into a new creation that will work on screen. Reading and viewing are connected but different processes, and it takes writers at the top of their game to make the two distinct versions work, and also to understand each others needs (while agreeing to differ from time to time). This conversation added so much to my already well-developed interest in this project. The second series has just been commissioned, the fourth book due in May next year, and I can’t wait for either of them now. 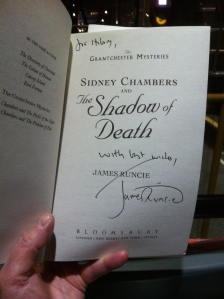 It was also a revelation to me that, as well as concerts, plays and exhibitions to lure me up to London, there is such a rich selection of literary events. This one was part of the programme of The Bloomsbury Institute, a chance to spend some time in Bloomsbury’s stunning Georgian premises in Bedford Square (and marvel at the benefits of having published Harry Potter). I shall be keeping an eye on this programme. More riches in Bloomsbury – with some time to kill before the event started I went into the London Review of Books bookshop to browse and, of course, buy, because I can never escape from there without, only to find that the shop was filling up for a readers’ event, part of their programme. So, perhaps I need a season ticket for London to fit in all these fantastic events.

Both James Runcie and Daisy Coulam have written interestingly (in Daisy’s case with the odd tiny spoiler if you are concerned about them) about their intentions and process in creating their particular Grantchester.

All the links in this piece were accessed on 12 December 2014.

The TV series is now available on DVD.

8 comments on “Grantchester: from page to screen”