A poem a day from Advent to Epiphany 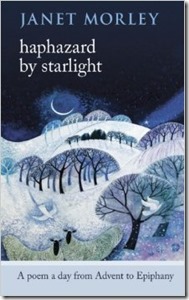 First, an admission: this is a classic case of judging a book by its cover.

I was actually looking for an old fashioned Advent Calendar – you know the sort of thing, you start opening the windows and doors on December the 1st and behind them there are angels and little lambs, and wise men and all that hackneyed, reactionary stuff. (I like them, so shoot me.)

While I was searching, this book popped up in the results and I immediately thought “What an lovely title – and what a gorgeous, evocative cover … what’s it about?”

I half-read the publisher’s blurb:

“Advent is celebrated when the year is becoming darker and colder, moving into the death and dormancy of winter. Before we can greet the coming of the light, we need to engage with some themes that are challenging and occasionally fearful …”

– and then I saw that it was a poetry book, analysing one poem a day throughout Advent and looking at work from poets as diverse as Rowan Williams, Sylvia Path and Philip Larkin. This, I decided, was a book for me, and I bought it on impulse.

It was only when it arrived that I noticed the publisher was SPCK – the Society for Promoting Christian Knowledge – at which point my heart sank a little, because I would normally arrange to keep at least two counties between myself and an SPCK publication. However, as I’d paid good money for it (as opposed to shamelessly cadging a review copy) I decided I may as well give it a go.

If you are someone who gets all bent out of shape and starts foaming at the mouth at the mere mention of words like ‘Jesus’ and ‘God’, you’d probably be better off doing something more entertaining and less infuriating than reading any further, because this is not the book for you.

If, on the other hand you are either Christian, agnostic or just cheerfully live-and-let-live atheistic, and you love poetry, then Haphazard by Starlight is a little gem.

It’s a very simple premise: take one poem with a wintry and/or Christmas theme, and then analyse it carefully – the language, the shape, the meaning – not with the intention of dissecting it to within an inch of its life, but to shine a new light on it and reveal shadowed corners and layers that might otherwise have escaped your attention.

When I read poetry, I don’t always (ie: hardly ever) sit down and think about it too much. Thomas Beecham once shrewdly said that the British public “may not like music, but they absolutely love the noise it makes” … and I hold my hand up to being very much the same with poetry: I like the sound it makes, but it seldom goes any further than that – which is a pity because fully understanding what you’re reading adds a whole new dimension to a poem. So, sitting down and concentrating on just one poem, if only for 10 or 15 minutes at the end of the day, was a bit of a novelty for me – as well as an eye-opener.

There are both old and familiar poems here as well as new ones (to me, at least). Starting with Rowan Williams’ haunting:

He will come like last leaf’s fall,
One night when the November wind
has flayed the trees to bone, and earth
wakes choking on the mould,
the soft shroud’s folding.

and ending with Gerard Manley Hopkins’ :

The world is charged with the grandeur of God.
It will flame out, like shining from shook foil;
It will gather to a greatness, like the ooze of oil
Crushed.

it passes en route through the expected (Eliot’s Journey of the Magi), the slightly unexpected (Emily Dickinson’s We Grow Accustomed to the Dark) and the completely out of left field (Larkin’s Church Going).

In each case Janet Morley thoughtfully but non-didactically examines the poem in detail, often giving a brief history of both it and/or the poet, the circumstances under which it was written and adding in any other detail she thinks will be useful in gaining a better understanding of what you are reading. The effect is rather like being in the comfortable company of a favourite professor.

Each day’s poem and analysis closes with a sort of ‘Thought for Today’- sometimes specifically Christian in tenor: “What is your own experience of the action of the Holy Spirit?” but often  applicable to everyone: “Is there anything you are afraid of, but must face?”.

Haphazard by Starlight works on several levels: as an end-of-day book when you can’t concentrate on the plot of the latest thriller, as a simple poetry book to be enjoyed at random when you’re in the mood or – as Janet Morley intended – to be read and thought about one poem and analysis at a time through the season of Advent.

And that eyecatching title? It’s from U A Fanthorpe’s BC:AD – which is the wonderful, iconoclastic choice for December the 25th:

Walked haphazard by starlight straight
Into the Kingdom of Heaven

This entry was posted on December 1, 2014 by Moira in Entries by Moira, Non-fiction, Poetry and tagged Advent, analysis, Christmas, Poetry.