The Road to Brighton in ‘Regency Buck’ 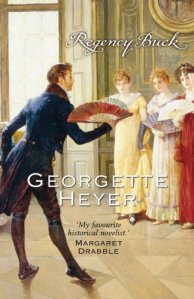 Here be spoilers.
This is not going to be a detailed review of Georgette Heyer’s Regency Buck (which is not one of my favourites for reasons I shall make clear). This anecdote, however, only makes sense if I reveal details of one of the set-pieces in the novel, so if you have not yet read Regency Buck, beware. But I hope it is not too spoilerific if I reveal that the protagonists of the novel are the worldly-wise Earl of Worth and his reluctant wards the spirited heiress Judith Taverner and her scape-grace but essentially good-hearted young brother Peregrine. So far, so Georgette Heyer.

Regency Buck is a fairly early novel (1935) and one in which Heyer parades triumphantly her immersion in the detail and atmosphere of Regency high society. In particular, there is much emphasis on the second favourite conversational topic of the English after the weather, which is how to get from A to B in the conveyance of your choice. There are detailed descriptions of journeys along turnpike roads, from Yorkshire to London, and later on from London to Brighton. And when I say detailed, I really mean it: where the toll-houses are, which tickets will open which gates; where the easy stretches are and where the horses will labour; where one vehicle can overtake another, and where there is the risk from highwaymen. It is actually a transport geek’s dream book, as well as a novel crammed with adventure and romance on every page.

About 20 years ago, I had the chance to test this out. I still live and I used to work very close to the famous Brighton Road, which runs from London through Surrey and Sussex and metaphorically linked Carlton House to Brighton Pavilion. One of the best times of my working life was the period I spent developing with a group of local historians a Local History Centre in Horley Library. The group I worked with were passionate about their town, one that many would say is scarcely worth the detour on the way to Gatwick Airport which these days is just to the south of it. As with so many English towns, there is far more to its history than meets the eye – and I was able to add to the sum of knowledge that it had a small but significant part to play in a romantic novel (you see, I knew very little of the history of Horley – though I was having a wonderful time finding out – but I did know a lot about romantic fiction).

The local historians at the time were researching the history of the Chequers Inn. When Horley was just a scatter of manor houses and farms it was known as a stage on the Brighton Turnpike, and The Chequers was the posting inn – that same posting inn where Judith Taverner’s reputation is put at risk on her madcap solo curricle ride to Brighton. My excitement over this was met with a raised eyebrow from our turnpike expert (sadly, now no longer with us), but I saw this as a challenge, working hard to convince him that Georgette Heyer’s research into the detail of her novels was impeccable and her accuracy unrivalled. And one thing intrigued me: Judith’s ride ends ignominiously at Cuckfield, where her guardian Worth stops her from driving any further alone, in a particularly humiliating scene. How could that be? My knowledge of the Turnpike route is that it took a straight path from The Chequers Inn towards Crawley, and it was the old road, the Balcombe Road, that would take Judith through Cuckfield (you see? I am not immune from the English obsession myself). In the end our expert agreed to read it (undoubtedly hidden in a copy of Turnpike Enthusiast, if such a publication exists, or similar).

A week or two later, I received a beautifully hand-written report on Georgette Heyer’s account of Judith Taverner’s ride. Georgette Heyer was correct in every detail, he had to admit, and the conundrum of the route was solved by the date in which the novel was set – 1812. The old road through Cuckfield was made into a turnpike in 1809. The newly built turnpike from Reigate to Crawley, the first purpose built turnpike road in Surrey, not until the reign of William IV. The report contained drawings of the vehicles driven and encountered by Judith on her notorious ride. It is a thing of beauty that (I hope) someone else will find and enjoy in the Local History Centre one day. Its final sentence thanked me for drawing attention to this event, while begging me never to ask the writer to read a romantic novel again ‘especially any by Miss Barbara Cartland’. I had obviously not managed to get the message across that all romantic fiction is NOT equal, so my work there was not quite done.

So, Regency Buck is a Heyer novel for which I feel a huge affection – not for the plot or the characters or even many of the set-pieces (compared to the wonderful Rule in my much-loved The Convenient Marriage, in a plot with many features in common with Regency Buck, Worth is a bit of a charmless thug; compared to Horry, Pel and Lethbridge, Judith is a ninny, Peregrine is a milk-and-water scapegrace, Bernard is an unconvincing villain. Sorry, and all that) – but because this pivotal scene was played out at the end of my road, almost, and as a result of looking behind Heyer’s research there is an addition to the local history of Horley, helping to rescue it from its rather dull image. When I drive along the A23, from Croydon through Merstham, over Red Hill, past Earlswood Common (pausing to look out across the Weald) and down the Salfords Pike, I can hear the thundering hooves of Judith’s team in my imagination, and when I pass The Chequers Inn I see Judith, uncomfortably waiting for her lemonade, the object of unwelcome attention from the ostlers and scrutiny from ‘Cripplegate’, the club-footed Earl of Barrymore, who will later cause her reputation to rock on its foundations. Next time anyone reading this is on their way to Gatwick, I offer this entertaining fantasy as a gift.

8 comments on “The Road to Brighton in ‘Regency Buck’”