The Rachel Carson Center, in Munich, is a unique environment: engaged, stimulating, sometimes fraught, always interesting.  I should know, because I was fortunate enough to work there as an editor in 2011-2012.  I recently caught up with two former colleagues, Managing Editor Katie Ritson and Communications Director Arielle Helmick, to ask them a few questions on behalf of Vulpes Libris.

VL: First of all, please could you tell us a bit about the RCC and your role in the organisation?

KR/AH: The Rachel Carson Center for Environment and Society (RCC) is a research institution for the environmental humanities. It runs a fellowship program, publishes a journal and book series, hosts a portal for digital resources, and organizes conferences and events. Its goal is to widen the debate about people and the environment to include perspectives from the humanities – this means involving historians, anthropologists, social scientists, theologians, cultural and media specialists, etc. in looking at the problems and solutions that our global society has faced in the past as well as now. The center is in Munich, but because we try to be part of a worldwide research culture, most of our day-to-day work is in English. 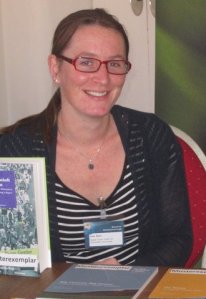 KR: I am managing editor for all of our English-language publications. I oversee our digital journal, RCC Perspectives, which is aimed at a general audience, and work with authors and contributors on our book series with Berghahn Books, and special journal issues e.g. of Environment and History and Global Environment. There is a team of four editors, all native speakers of English (although currently from four different countries), who work on the texts. They work especially closely with authors who are not native English speakers to make their words as accessible and readable as possible – not an easy task, given that these are academics from a range of disciplines with often quite complex arguments. Most of the editors also translate into English from one or more other languages.

AH: I am the Communications Director, so I work closely with Katie, but I thankfully do not have to edit publications! I oversee our website, our newsletter, our social media (though our editors do the heavy lifting on this), and all PR for the Center. I also coordinate some events; I’m currently working on our largest conference for this year, ‘Circulating Natures: Water—Food—Energy,’ the 7th Biennial Meeting of the European Society for Environmental History. A lot of my job is also internal communication – working with both our fellows and our interns and generally trying to make sure that everyone is up-to-date on all our projects and activities.

KR: The RCC has an excellent coffee machine and that’s where the day begins for a lot of people! One of the nicest things about the RCC is that half of the people working there at any one time are international fellows on a writing sabbatical from their home university. So the conversations at the coffee machine (or while making tea) in the morning are a really great way to find out what people are up to – where they come from, what their research is about, how they find Munich compared with Hawai’i/Maryland/Stavanger/Ulaanbaatar. A lot of the rest of the day will be spent at my desk, answering emails, or reading articles at various stages in the publication process, but I also spend time talking with the editors and with other colleagues. Conversations with editors can sometimes be about quite specific niggles, like the correct way to use a semi-colon, or whether to italicize or translate a foreign term such as Waldsterben (forest dieback). There has to be an element of perfectionism to editing, and all of us really care about the language. It’s great working with academics, who are also very careful about the words they use, and appreciative of the efforts we make to get their point across in print. 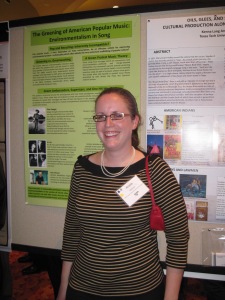 AH: Well, as with most office jobs, I spend a lot of time on email or in meetings. I prefer the meetings, as they involve actual people exchanging ideas as opposed to emails which are me and a machine. And, the meetings often involve a lot of brainstorming, so I feel like I am really shaping projects and offering input as opposed to just listening to reports. Once I finish the emails and the meetings, I work on different projects—including drafting news stories for our website, working on the next newsletter (both writing the text and chasing down information), coordinating meetings with the fellows, working with our rotating group of interns, etc. Part of my job also involves attending events, which is quite fun – I go to lectures, conferences, and our film screenings, which makes a ‘work day’ seem like something else.

VL: What are the rewards and challenges of working across two (and sometimes more) languages?

KR: One reward of working with more than one language is that you get a heightened appreciation of your mother tongue, as well as the others you use. I translate a lot too, and there’s nothing like grappling with the exact meaning of a phrase in German to make you realize how differently languages work. Some ideas that are simply expressed in one language are almost impossible to get across in another – knowing this challenges the very way that you think and see the world. In a sense, it can take you beyond language itself. Last week, I helped one of our current fellows translate a long sentence from Early Modern Swedish into English. The words themselves (an early legal expression of the obligation to maintain ditches) were no real help – to get the English right, I had to really understand the mechanics of water volume and flow in a landscape, in a physical sense, and then grope around for a way to express those ideas in contemporary English.

AH: Well, I love the fact that I can work mostly in English – even though my German is fluent, it’s nowhere near my English language abilities. I really enjoy the fact that my native tongue has become a marketable skill! I also really enjoy speaking German – for communicating, it is often more direct and allows me to say things that I would normally agonize over in English. For example, it’s easier for me to provide feedback in German (and even to argue, not that I often need to) than in English. The challenges come when I have to write in German – even emails, which need to be quick – take more thought and I never feel like my written German expresses exactly what I want it too.

VL: How do you navigate the interactions between research and policy, academia and public outreach, social sciences and humanities? (I know, massive one).

AH: Our blog, Seeing the Woods, is new terrain for us (online since October 2012), but it has already become a great tool for navigating between academics and the public, as well as between different disciplines. Natural scientists and humanists often seem to be speaking two different languages, and there are few “translators” to bridge this particular gap, but one of our goals is to facilitate a conversation—and on Seeing the Woods, we can profile many different types of research and perspectives. And, the format lends itself to public outreach, so that we’re connecting with new people all the time (who then hopefully check out our portal or our publications). We highlight a lot of our own work—our videos, publications, and fun profiles on our fellows, but we can also use the blog to respond to current environmental topics. Donald Worster, a well-known American environmental historian and former Carson Fellow, wrote a short analysis linking a recent dust storm in Oklahoma to the Dust Bowl crisis of the 1930s. And, we are using the blog to focus on more international issues as well—a new feature will have our fellows writing about environmental issues in their own countries; Fei Sheng from China kicked off the series with a look at colors and the environment in China. 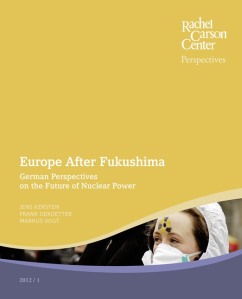 KR: Our house journal RCC Perspectives, which is free to download online, tries very hard to bridge the gap between academic and more general readerships. It presents academic research and argumentation from a variety of standpoints to a non-specialist audience. So, interested general readers have access to current insights from archaeology, theology and environmental ethics, history, anthropology etc. presented by leading scholars in the field, presented as short essays or opinion pieces, with as little academic jargon as possible. Some recent issues have been about the modern understanding of risk, the legacy of the scientist and writer Rachel Carson, the meaning of “diversity,” and the history of empires and water control.

VL: Finally, we always ask our guests to recommend five books they enjoy, with a few words about each.

KR: The best novel I read in 2012 was undoubtedly New Finnish Grammar by Diego Marani, translated by Judith Landry. It is a compelling story and particularly appealed to the linguist in me – its exploration of how language moulds identity will strike a chord with anyone who is interested in how languages really work. As a non-fiction counterpart, I recently loved Is That A Fish in Your Ear? Translation and the Meaning of Everything, by David Bellos.

I read a lot in German as well as in English, and while I wouldn’t usually say I’m a big fan of detective fiction, some of its more original voices, such as the Austrian writer Wolf Haas (his novel Brenner and God was recently translated into English) and the German Jakob Arjouni, who died very recently, are really great.

I also recently translated a short story by the Swiss writer Franz Hohler, which will be available digitally in the May edition of Mad Hatter’s Review.

So of course, I recommend reading that! Franz Hohler’s The Stone Flood is available in English translation by John Brownjohn.

AH: Well, my reading tastes are decidedly low-brow, so those expecting recommendations of ‘great novels’ might be disappointed. As my own academic interests focus on popular culture, I tell myself that I am keeping up with the zeitgeist (though I won’t be recommending any of the currently trendy YA series, even though I may have read them…) So, some top picks are:

The Historian by Elizabeth Kostova; Wicked by Gregory Maguire; Mr. Pettigrew’s Last Stand by Helen Simonson; and as a shout out to VL contributor, Ticky Dogge-Hare, This Charming Man by Marian Keyes.

Many thanks, Arielle and Katie, for speaking to us today.