Literary Competitions, Then And Now 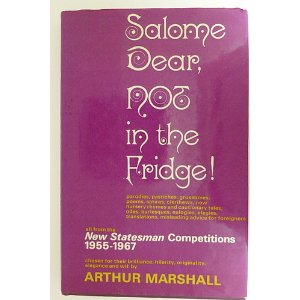 This is comedy week, but I have a bit of a problem: already, one by one, I have brought out most of my comic favourites (Beachcomber, Flann O’Brien, The Stuffed Owl) and reviewed them here – and those I’ve missed Bookfox Kirsty has retrieved (Molesworth, Le Petit Nicolas, Spinal Tap). So, what is there still for me to talk about? I want to take a look at a source of comic writing that started in the early 20th century and is just about hanging on by the fingertips now, and (rather as Bookfox Kate did yesterday) consider what it says about how humour evolves and either becomes dated – or not.

The Literary Competition was a splendid way for weekly magazines to tap into an infinite source of wit and verbal cleverness – provided by their readers. It has remained the bailiwick of the New Statesman since it started to run them before the Second World War, and there is a weekly competition in the NS still. I am sorry to confess that The Staggers never crossed our threshold when I was young, and I never acquired the habit when I grew up, but I have a strong recollection of other weekly magazines such as The Listener and Punch running pale imitations. There is also evidence that the influential journal by and for women, Time and Tide, ran a literary competition. The Diary of the Provincial Lady has the running joke that its heroine is always trying to think of a clever entry to send to Time and Tide (for which E M Delafield wrote the Diary), and whenever she does, Lady Boxe has always either thought of a cleverer one, or thinks the subject beneath her.

So humour, which is so elusive and tricky, is placed in the hands of those whom the editor does not have the embarrassment of having to sack (or indeed pay, more than a token, or a token amount, for that matter). Yet some of these competitors gained great names and reputations. NS competition winners have found their own fame, anthologised, quoted and misquoted, and often the origins of their bons mots are forgotten. But not by me. *I* know that the origin of the jolly couplet “Breathes there a man with soul so dead / Who was not, in the Thirties, Red?” won a prize in 1956, in a competition for Deflating Additions to famous lines of poetry. That comp. also yielded a personal favourite: “Yet once more, O ye Laurels, and once more, / I deliver the Telegraph under the door.”

As I led such a deprived childhood, I rely on three published collections of NS competitions, covering the 1930s to the end of the 70s. The content is very variable, and relies on a concept of wit that says much about the particular age and its preoccupations. Some of the entries when read today are positively narcoleptic, some are in-jokes, some are jokes the point of which or the butt of which is lost in the mists of time. They also say much about prevailing tastes, education and culture – ration books in the 1940s, Top Gear jokes in the 2010s. But enough of them take flight and rise above all that, and, as far as I am concerned, have entered my mental furniture for good. It does help to have read the likes of Wordsworth and Tennyson at school, and to be interested enough in other writers who have passed out of fashion. The foundations for these pieces of (more or less) short comedy are parody, pastiche and puns, mostly, plus Clerihews, triolets, and with lashings of that old stand-by, comic verse. Most of the pieces were limited to 200 words, and my goodness, that must have posed a challenge to the entrants – no way of winning if you didn’t have time to write something short. On the whole, my preference is for the shortest of the short forms – the Famous Last Words, the Deflating Additions, and particularly the Gruesomes (one of the best of which provided the title for one of my collections ‘Salome, dear, NOT in the fridge!’)

There were two sets of creative minds making the Literary Comps into an enduring feature – the entrants, of course, but also the competition setters. From them came ideas that were sometimes pedestrian and obvious (asking for a Clerihew on a historical figure, or someone in the news), but sometimes wildly inventive topical ideas, like a conversation between two people on the Wolfenden Report, one of whom thinks it is a report on Sports Development, and the other the report on the decriminalisation of homosexuality (he got about, did Lord Wolfenden, and published both of these in the same year). For me, some ideas really struck a spark, such as Strange Bedfellows, a request for passages from novels written collaboratively. I particularly loved the joint effort of Daphne du Maurier and Nancy Mitford, by Gwen Foyle, from 1955:

“Rowena,” I said, “I found this photograph in the second drawer of the bureau in the morning room, when I was looking for my will.”
“Oh, darling, it’s Edgar, ” she giggled. “Isn’t he bliss in his coronation robes!”
“Were you married long?”
“Well, not really, darling, but then a day could be quite a long time if you were spending it with Edgar.”
“In plain language,” I said, “why did you marry him?”
“Well, he seemed a terrific Hon. – tres gentil. And then when he seduced me in the middle of my third season, Mummy thought it would be a good idea. So I did. Of course, he was awfully, rich, and a Duke, but horribly middle-class – and not very nice, darling.”
“I found these pills, too,” I said. “There are seven of them – round, glossy, easy to swallow -.”
“They’re the sort you give to dogs, she said, “when they have to be put down.”
“Rowena,” I said, “was your first husband’s death – accidental?”
She did not answer immediately. She straightened the rug over my knees. I saw that her eyes were full of tears.
“Oh, darling,” she said, “why do Border Terriers have to get old and smelly?”

Well, that was a risk – who found that funny? I did, but I know how personal these matters can be.

Some of the entrants to these competitions became legendary. One entrant in the 30s and 40s, Allan M Laing, must have made it his life’s work, entered every week, and in the preface to my 1946 collection claimed, tongue firmly in cheek, that he (in my opinion not playing the game at all) used numerous pseudonyms, sending in many entries to the same competition (I think I’ve been ‘had’ there); nevertheless, instead of being banished and vilified, he kept on winning, coming second and getting honourable mentions for years and years, a NS Treasure. For the left-leaning NS, some of the competitors seem rather unlikely, such as the legendary Lt Col W F N Watson. Let me never stereotype a New Statesman reader again. Many of them I was glad to see on a regular basis, while being quite grateful that they did not share my social circle being relentlessly witty all the time. 200 words every week or so was just fine.

So, I asked myself if there was a golden age. My three collections all contain both gems and longueurs, and all are lovely to dip into. The earliest is a slim, elegant volume, published by Faber in 1946 and compiled by the Competition Editor G W Stonier. It can be seen from this volume that in earlier times the entries did not have to be ‘all your own work’. Entrants were sometimes asked to send in their eavesdroppings, or a favourite passage from literature on a certain theme. (In later years nothing so easy as that was required.) It was the age of the Clerihew, a splendid vehicle for wit, but – reams and reams of Clerihews, and only a handful stand out. The other two are collections edited by a forgotten figure (but I shall be so pleased if you all pile in and tell me you haven’t forgotten him): schoolmaster, radio personality, popular writer and quiz panellist Arthur Marshall. He managed to be erudite, hilarious and camp all at the same time, which was tremendously infectious, and he was the very person to pick out the gems from the enormous pile of near-misses and misfires that must have been the sum total of ten years of weekly competitions. The first of these two collections, ‘Salome, Dear, NOT In The Fridge’, covered the 50s and 60s. I think that the standard of wit was probably pretty consistent from the 30s until the end of the 60s, but his genius was to find the best. However, by the 70s, the competitions were running along in a rather old and tired way, relying on rather heavy-handed challenges which had the (presumably) left-leaning folk who entered the competition writing against type parodying the Express and the Mail; old favourites (and more Clerihews). So my third collection, Never Rub Bottoms With A Porcupine, which had been elevated to a large format hardback with cartoons by Michael ffolkes, seems to be trying too hard. My golden age, then, is the 50s and 60s, but I cannot help thinking that it is the anthologist’s genius of Arthur Marshall that makes me think so.

By the way, the NS competition persists to this day, and I occasionally go online to see if there’s funny week to be found in the archive. I almost invariably come across a Jeremy Clarkson joke, and I retreat back to the years of my youth, and ‘Salome, Dear, Not In The Fridge!’

6 comments on “Literary Competitions, Then And Now”