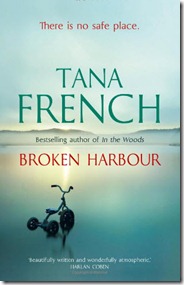 This is the fourth novel by Tana French, an Irish crime writer who has done much since her first book, In The Woods, to establish herself as a practitioner of what might be called Dublin Noir. Each novel focuses on a different set of characters within the same world, with minor and recurring characters flitting in and out. This loose serialisation preserves a sense of continuity for those readers who like to start at the beginning as it were, without a loss in sense or enjoyment to those who can’t, or don’t want to read in order.

That is not to say that there is no value in reading the books in the order they were published. Although Tana French’s oeuvre isn’t huge, there is already evidence of her style becoming more noir-ish. In The Woods was a fairly intense novel, which focused on the relationship between two young detectives and the consequences of past actions and these themes have been followed up and developed since. Broken Harbour is probably the most emotionally intense to date and encapsulates some of the consequences of Ireland’s economic boom and its fall from grace since 2008.

French’s central character is Mick Kennedy, a forty- something murder detective. He is also her narrator, which makes him both interesting and unreliable. He comes across at the outset as arrogant, serious about his job and bad at relationships, especially with women. It quickly becomes apparent that Mick has layers, that they are complex and painful and that the arrogance is a cover for a raw vulnerability that he keeps from the world. His relationship with his beautiful, disturbed younger sister Dina is a particular flashpoint.

The thought of Dina hearing my voice talking about Broken Harbour sent heartburn flaring across my chest. (p106)

One of French’s strengths as a writer is that her fascination with character does not result in her neglecting the plot and in this case, the results are especially powerful. The backdrop is a half-built housing estate outside the city, which was abandoned by the developers when the money ran out. The houses, which were sold as dream homes for young families, are poorly-built, falling apart, full of damp and fit only for tearing down. They have come to symbolise Ireland’s economic dream; that too looked good till you got close enough to see the cracks. The houses also reflect the crumbling psyches of those who live in them; unable to deal with the financial destruction, the occupants turn in on themselves, their loved ones, their neighbours, seeing monsters wherever they look. This is a powerful background to a horrific crime that no-one, least of all the investigating officers can begin to comprehend.

The figure of Mick Kennedy is backed up by a number of other convincing characters; first person narrators tend to put themselves at the centre of the action but Tana French does not allow too much of that. Not only does Mick have his ego punctured on a regular basis, the people around him are individuals in their own right. From the outset, he finds himself puppy-walking Richie Curran, a rookie detective with poor dress sense and the sort of low self-esteem that comes from growing up on a grotty housing estate. And, in this reader’s opinion, being called Richie, instead of Richard. His given name might have furnished him with a little adult dignity and authority and he sorely needs it. However, Richie works, he’s sympathetic, good at what he does, with a dry sense of humour that challenges his senior’s preconceptions.

Further comedy is provided by Cooper the pathologist. The influence of TV dramas such as Silent Witness and CSI means that crotchety pathologists are now a staple ingredient in police procedurals on the page and off it, but they are not always as frightening or as funny as Cooper. He is a recurring character who has featured in French’s previous novels and although he is not foregrounded, it would be a mistake to think of him as minor in any sense of the word. He is inclined to see his role as much the most important in a murder investigation, while detectives are mere adjuncts to him and what he does in the mortuary. There, he is in unquestioned charge and may the Creator help any police officer who forgets it. Cooper’s disdain is bestowed regardless of rank; he does not need the approval of senior officers, they need him and he is happy to remind them of that fact.

However, Broken Harbour is not a novel for those looking to lift their mood. It is not a cosy police procedural; the crime at its heart is too terrible and the lives of its characters too complex for that. The background of economic and social catastrophe makes the darkest impulses of the human heart all too feasible for even the most optimistic of its readers. I would recommend this book, but with one proviso; you really need to be in the mood.

This entry was posted on November 13, 2012 by sharonrob in Entries by Sharon, Fiction: 21st Century, Fiction: crime and tagged detective fiction, Dublin novels, In the Woods, Ireland, Tana French.