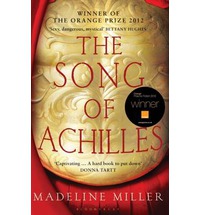 Greece in the age of heroes. Patroclus, an awkward young prince, has been exiled to the court of King Peleus and his perfect son Achilles. Despite their differences, Achilles befriends the shamed prince, and as they grow into young men skilled in the arts of war and medicine, their bond blossoms into something deeper – despite the displeasure of Achilles’s mother Thetis, a cruel sea goddess. But when word comes that Helen of Sparta has been kidnapped, Achilles must go to war in distant Troy and fulfil his destiny. Torn between love and fear for his friend, Patroclus goes with him, little knowing that the years that follow will test everything they hold dear.

I first caught sight of this book fairly recently on the Orange Prize shortlist and, having read it, am more than delighted that it walked away with the prize on the night. It more than deserves it. I have to warn you that, unlike most of my recent reviews, this particular review will be very much in the cheering fan-girl format, but I make no apologies for that. Yes, the book is that good …

Because The Song of Achilles is lyrical, magical, romantic, intellectual, literary, commercial and simply downright bloody marvellous and, frankly, I cannot sing its praises highly enough. I suspect it’s going to be the best book I read all year, and some. It may even be up there holding its own with my two favourite books of all time (Eliot’s Middlemarch and Murakami’s The Wind-Up Bird Chronicle, if you’re asking), which for me is definitely saying something.

I understand Miller took ten years to write it and it’s worth every second. Initially the story and the lyrical, literate way of telling it reminded me of my youthful obsession with all things Renault, but Miller is far more than a rehash of an already incredibly good and sadly departed author. In this more modern age, Miller is also unabashed at clearly showing the developing romantic relationship between Achilles and Patroclus, whereas Renault would perhaps have been more circumspect:

Our mouths opened under each other, and the warmth of his sweetened throat poured into mine. I could not think, could not do anything but drink him in, each breath as it came, the soft movements of his lips. It was a miracle.
I was trembling, afraid to put him to flight. I did not know what to do, what he would like. I kissed his neck, the span of his chest, and tasted the salt.

Miller also takes on board the gods and mythical creatures who inhabit and influence her fictional world as real entities in the text. I loved that. It’s going to be incredible when the film comes out though, being a dyed-in-the-wool reader, I will always love the book more thoroughly.

Here, the story belongs to Patroclus and nobody else, and that feels perfectly right. Everything we see and experience is filtered through his viewpoint. As he always has the most to lose, the essential dramatic tension is more than fulfilled in this decision. He’s also a wonderful character, and keeps you so hooked into his world and life that you simply have to keep reading, at the same time as appreciating the poetry and beauty of the prose. It’s a classy and never less than perfect balance between character, plot and fine descriptive writing of the highest quality and focus. The only time when my attention was slightly less than 110% was at the beginning of the Trojan siege where I was rather bamboozled by who was doing what to which set of people, and what tactics they were employing to do it. No doubt that is my lack of a truly classical education coming out, though in my defence I did read all the tales of ancient Greece and Rome over and over again in my teenage years, as well as being a Renault obsessive of course. However it was all a long time ago.

Not that you need that kind of background to appreciate this book as, whichever window it’s viewed through, it’s a captivating novel of historical adventure and romance, and a tour de force in its own right. Plus, apart from Patroclus, the other characters are expertly and sharply depicted. There’s Achilles, caught in the no-man’s land between being human and being the son of a goddess; then there’s the wonderful tutor Chiron, half-man and half-horse, the power of his influence felt by how much Patroclus knows he will miss him, and by the wry wit of his (Patroclus’) return to the more familiar world:

A saddle felt strange after so many years on foot, and the horses unnerved me. I half-expected them to speak, but of course they could not. I twisted in my seat to look back at Pelion. I hoped I might be able to see the rose-quartz cave, or maybe Chiron himself. But we were too far.

And I mustn’t forget to mention the slave girl Briseis who enters the story later on, during the Trojan siege, but who is never less than fascinating on the page. She adds a necessary humanity to the war sections and also a widening community feel which is a clever contrast to the focus on Achilles and Patroclus.

The other great joy (well, one of the vast number of great joys, let’s face it) about this book is the epic nature of it – we journey with Patroclus from his time as a young boy to the time of his death and beyond. In the middle of all this, we see the ancient heroes of old enriched with a piercing and profound humanity, as they play their parts in the story. I particularly enjoyed the political wiliness of Odysseus and his unexpected humanity towards the finish. Great stuff. Of course we all know how the legend ends, but here the excellent way Miller carves out the book’s denouement is absolutely perfect and immensely satisfying, both in terms of literary adventure and literary romance.

I can only encourage you to buy it, read it, immerse yourself in it and enjoy. Brava, Ms Miller, brava.

[Anne, as a writer of gay fiction, is always happy when gay fiction written by women is taken seriously. Until 7 September she is taking part in a book tour for her fantasy novel The Gifting, which has recently been included in the Awesome Indies listings and whose main character is gay.]