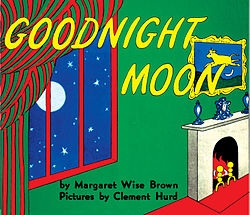 In the great green room there was a telephone and a red balloon and a picture of the cow jumping over the moon and there were three little bears sitting on chairs and two little kittens and a pair of mittens and a little toyhouse and a young mouse and a comb and a brush and a bowl full of mush and a quiet old lady who was whispering hush . . .

Sound familiar? Goodnight Moon is one of the most successful children’s books of the twentieth century and has been in print since 1947. I don’t remember it from my own childhood but I have been reading it every night to my daughter since she received it as a Christmas present. It is THE book. The final book we read before bed because it has the effect of making my daughter yawn with increasing frequency until her eyes can barely stay open.

Goodnight Moon is the story of a passive little rabbit, who allows himself to be put to bed without much of a battle, although at one point – in an uncharacteristic moment of action – the rabbit does turn to look at the wall behind him. And let’s remember that the quiet old lady finds it necessary to whisper “hush”, so the little rabbit might well be doing something to get on her nerves.

On first glance the rabbit’s bedroom appears to stay the same, but closer inspection reveals that over the course of the book the light fades, the hands on the clocks move from 7:00pm to 8:10pm, some mush gets eaten and the mouse is implicated, the red balloon comes and goes, the moon rises in the window, and the kittens and the mouse move from place to place. Most interestingly, at the start of the book the quiet old lady’s rocking chair is empty except for knitting, then she first appears in a black and white plate, then colour, then at the end of the book she is no longer present and sleeping kittens fill her place. But still, it’s not what you’d call an action blockbuster.

The best thing about the book is the mouse. Each full colour plate features a tiny white mouse who is seen in a different place each time, and he’s remarkably difficult to spot, especially because of the fading light of the nursery.

Another point to note is that the book has a strange hypnotic effect on the reader, and the very act of reading it feels like winding down for sleep. The diction and syntax do something to the brain which in turn has an effect on the body, with the reader’s breathing becoming a little slower and deeper, and tension in the body seeming to drain away. Even more odd is the effect the text has on the voice. The first page starts off quite jauntily and I launch into the story with a sort of plummy boom to my voice but gradually my voice becomes lower and quieter until the final page is recited in a whisper. Having conferred with other parents, I’m not alone in experiencing this bizarre voice-altering effect.

Apart from its incredible soporific effect, for which countless parents will remain forever grateful, what is the appeal of Goodnight Moon for children? Because some readers (*cough*) find the alternating colour and monochrome plates showing a young rabbit being put to bed . . . well . . .  a bit creepy. The illustrations are very detailed but the colours and composition are (to my adult eyes) quite unsettling. Children, however, appear to love it. Naturally they identify with the little rabbit sitting in his bed within a seemingly huge room full of familiar objects, and many children will take comfort from the ritual of bidding these familiar items goodnight. It’s sweet.

There is also the matter of the somewhat startling lines:

Apart from the annoying fact that my toddler has started referring to my cooking as “mush”, what actually is mush? Who eats it? Do rabbits eat mush? Or is the mush representative of something? More on this later.

And what is one supposed to make of the eerie “goodnight nobody”? What does it mean? Is there a ghost present? Ah yes: death. Is Goodnight Moon symbolic of a child coming to terms with the concept of death? The night is falling and everything is wished goodnight. Are we talking the ultimate goodnight? Could the ghost – metaphoric or literal – be the “quiet old lady whispering hush” . . . ? Maybe that’s why rabbit and old lady are not really interacting? There are no bedtime cuddles, kisses or songs. Just one instance of “hush”. Deadness and/or ghostiness could explain 1) the lack of interaction between junior and senior rabbits, 2) the old lady’s quietness, 3) her absence at the start of the book and subsequent emergence through a black and white plate, and 4) the fact that the old lady is no longer present at the end of the book. This theory might also explains the “hush”; meant not as a reproof but as a word of comfort to soothe a crying child.

Or perhaps the old lady is indeed alive (or as alive as one can be in a 65-year-old illustration), but the rabbit is becoming aware of his own rabbitty mortality, understanding that one day he will outgrow all of the objects in his bedroom, see the demise of the mouse and the kittens – though a cat would generally live 3x longer than a rabbit, if we’re going to be pedantic about it – and has been hit with the realisation that one day he will watch his last moonrise, and that he will, eventually . . . turn to mush.

Or perhaps I’ve just read Goodnight Moon a few too many times.

In any case, if you’ve never read Goodnight Moon and this review has made you at all curious, then do check it out. No other children’s book is quite like it.

P.S For an extra bit of trivia, certain readers will be amused to note that a doctored photo of the book’s illustrator Clement Hurd was included in the 60th anniversary republication of Goodnight Moon. In the famous image of Hurd he held a cigarette between his fingers and the publishers decided that this set a bad example to children and so the cigarette was airbrushed away, leaving an interesting portrait of a man extending his hand to hold nothing. Some readers are still waiting for the red balloon to be removed from the illustrations (the string is a strangulation hazard) and the bedroom’s fireplace to be bricked up (no fire guard or smoke detector) and the hygienic extermination of the mouse.

Lisa has just released a gripping teen novel, SNAKE BEACH, which is available in e-book form here and here.

This entry was posted on April 4, 2012 by Lisa in Entries by Lisa, Fiction: children's, Uncategorized.