A Boy and a Bear in a Boat by Dave Shelton

I have fallen in love.  Not just plain old ordinary comfy love, but utterly all encompassing, delirious love.  Naturally, when that sort of thing happens to me…it’s all over a book.

A Boy and a Bear in a Boat is not my usual obsession either.  It’s a small book for little people.  Such a gorgeous small book, with a map for a cover with a tea stain and a squashed fly.  There’s a heaviness to this book that promises all sorts of wonderment when you hold it.  This book feels special.  And it is.

I have a sort of mission.  Books for 5-8’s are over populated with sparkly things and doe eyed animals and farts. And I know from experience that there are quite a number of serious little boys and girls in this age group.  Children who are looking for more from their stories than bums and wands and puppies with bandages.  So when I find something extraordinary, my heart leaps and I have to share.

This story begins as a boy (called boy) meets a bear (called bear) and climbs aboard his boat (called Harriet).  They venture out to sea together and head “to the other side” armed with a suitcase and an unreadable comic and a ukulele…and plenty of tea breaks.  The trip contains some danger, in the form of a radioactive sandwich and a sea monster and various other perils. But mostly it is about the quiet times when a deep and glorious friendship between the mismatched pair begins to develop.

If any of you have ever been on an immensely long journey with a child, you will instantly identify with this scenario.

The bear carried on rowing and looked at the boy grumpily.

But playing I Spy where the only rule is, the spy has to be *outside* the boat, proves utterly pointless and completely frustrating in the middle of the ocean.  The bear however, continues to spend ages working on his guess.

“I spy with my little eye something beginning with S”

He furrowed his brow in concentration, rolled his eyes up to one side, down at the deck, up to the other side, scrunched them shut, opened them again, tapped his foot, scratched his head, scratched his bottom, scratched an ear, muttered to himself, waggled his jaw, hummed a little. The boy half expected smoke to come out of his ears he seemed to be thinking so hard.

All the eye rolling and scratching and tapping and waggling stopped for a moment and the bear looked blankly at the boy.

“Um, what did you say it began with again?” said the bear.

“S,” said the boy. Like everything we’ve spied for the last hour, he thought.

The illustrations are a joy.  They punctuate the text beautifully making this not only a shared reading experience but also a beautiful possession.  The facial expressions worn especially by the bear throughout are superb. 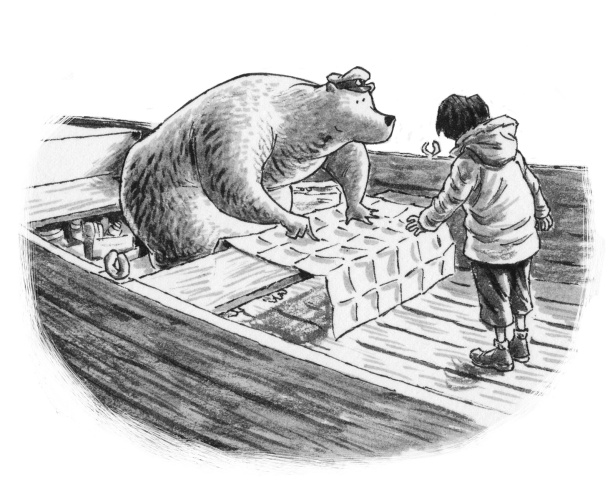 With chapters called On-Board Entertainment and Inclement Weather and problems including anomalies in the current and regrettable additional delays, you’ll understand this is not a book that ever talks down to its audience.  I would imagine there’s not a small child out there who won’t come away from this story with an increased vocabulary. They’ll also be pretty good at making the perfect cup of tea.

I think it’s safe to say this is one of my utterly favourite books, ever. Stand out books for emerging readers are in short supply in comparison to other age groups.  Which is a real shame as there are a lot of glorious picture books and plenty outstanding confident readers…but we risk losing kids in the intervening years if we can’t find enough variety for this stage. I would urge you to seek out a Boy and a Bear in a Boat and find a child to give it to. You will both be enchanted.

And just to prove how right I am, here’s a snippet read by the author himself:

This entry was posted on March 17, 2012 by Eve Harvey in Entries by Eve, Fiction: children's.