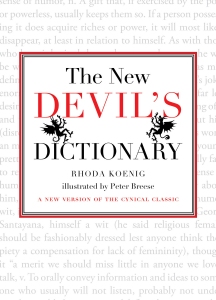 Ambrose Bierce’s masterpiece of cynical wit, The Devil’s Dictionary, first appeared in 1911, its caustic wisdom and arch tone lambasting follies and vices all around. To mark its centennial, Rhoda Koenig offers her own brilliant versions of Bierce’s mordant vision, taking a red-hot pitchfork to individuals and institutions alike. Far more than an attack on jargon or political correctness, it takes on the vanity and hypocrisy of male and female, rich and poor, old and young, left and right, painting a hilarious portrait of society today. It deals with classic subjects but also defines new ideas and explicates new usages from “cell phone” and “Facebook” to “teamwork” and “women’s magazine.”

If you relish pointed criticism of immoral behaviour, The New Devil’s Dictionary, with slashing illustrations by Peter Breese, will leave you howling for more – with malice toward all and charity for none.

The devil owning a dictionary is a somewhat startling concept and causes me to imagine Lucifer sitting at a kitchen table, peering at a dictionary for help with a crossword puzzle. Suffice it to say that I had not heard of Ambrose Bierce’s The Devil’s Dictionary, and if it wasn’t for Rhoda Koenig’s delightful email offering a review copy of her updated version, this book would have escaped my notice, and that would have been a huge shame since The New Devil’s Dictionary is a wonderful little book, as mad and spiky as it is warm and amusing.

The reader of The New Devil’s Dictionary must first contemplate the idea that to be a cynic is a fine thing and that eyeing the world with a critical sidelong glance is to be encouraged. In this sense The New Devil’s Dictionary sits alongside books like Barbara Ehrenreich’s Smile or Die, which run counter to the relentless tide of positive thinking, and instead embrace realism, vigilance and wit.

The introductory essay of The New Devil’s Dictionary absolutely must not be skipped, since: 1) it is hilarious; 2) it considers the rather colourful life and ideas of Ambrose Bierce; 3) it discusses the importance of cynicism, and 4) it makes the case for why a new version of The Devil’s Dictionary is necessary.

In tackling the last point, Koenig leads the reader into some uncomfortable territory, such as Bierce’s opposition to women’s suffrage, a view that today seems cruel and narrow-minded rather than just cynical. There is also the other issue of how society has changed in the past century. As Koenig says of Bierce “A hundred years on, Bierce’s cold eye and diamond-tipped pen retain their ability to shock and amuse. But some of his definitions are now about as shocking as the sight of a female knee.”

In the absence of definitions for the words “book” and “fox,” I will end with a few of my favourite entries from The New Devil’s Dictionary:

birth-control pill n. Contraceptive that has ensured that every baby born since its invention has been wanted – by its mother.

bright n. Of a child, not actually retarded. Of a room, in real-estate parlance, minuscule.

intelligent design n. Theory that the nature of the world is, ipso facto, proof of the genius of its creator. Promulgated, oddly, by believers.

piety n. One of the many dreary duties the rich subcontract to the poor.

pessimist n. Optimist with a higher success rate. Unlike his cheery brother, he is pleased when things work out well and pleased when they don’t. The pessimist’s disappointment at getting the smallest slice of the pie is countered by his pleasure at having predicted that he would.

suspicion n. Scrutiny we apply to all motives but our own.

tea n. Meal that, not requiring the expense of alcohol, or the obligation to entertain others for very long, exemplifies English hospitality.

And, as a lifelong vegetarian, I must include the following:

vegetarian n. Person who wishes to feel the glow of purity without the drawbacks of the real thing.

If you enjoyed these definitions and you’re in search of a witty book that will put a spring in your step on a rainy day, I can highly recommend The New Devil’s Dictionary.*

*The easily-offended and ultra-religious should probably steer clear.

For a fun interview with Rhoda Koenig, check out this article in the Camden New Journal.

8 comments on “The New Devil’s Dictionary by Rhoda Koenig. Illustrations by Peter Breese”