The Ballad of the Loathsome Worm: not the year of this dragon? 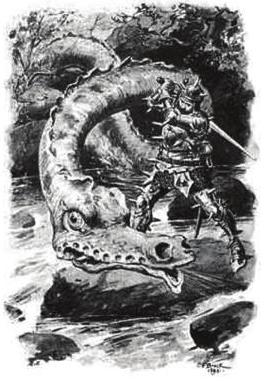 When Jackie proposed a Dragon week for the Chinese New Year, it gave me a severe attack of ‘earworm’ (appropriately enough). A ballad about a peculiarly English dragon started going through my head, and I couldn’t get rid of it. The subject of the ballad is a young hero who is turned into a horrible and repulsive dragon by his wicked stepmother. That started me thinking how incongruous this was. Chinese dragons, it would appear, are to be celebrated, and have a year dedicated to them and their positive power and influence. But the burden of this ballad is that a dragon is to be loathed, and that to be turned into one is an act of the vilest malice.

Western dragons are evil and undesirable. They guard treasure they have no right to. They breathe fire. They rampage around the countryside terrorising the populace, firing crops and ‘devouring maidens, out of season’ (and if you’ve never had the pleasure of laughing your head off at Stan Freberg’s ‘St George and the Dragonet’, get thee to Google forthwith!). And in this ballad, the dragon is disconsolately coiled at the foot of a tree, killing knights who come to rid the earth of him, and wondering how he can be released from his curse.

The Chinese dragon, on the other hand, is celebrated in festival and dance. The Year of the Dragon is thought to be particularly propitious – parents want their children to be born under the influence of the dragon. The dragon stands for power, but the benvolent power of nature that brings life, and the sort of personal power that brings success. I’m guessing that a young man turned by his stepmother into a Chinese dragon would not be throwing the sort of teenage sulk that ends with seven mighty champions slain and/or an unknown number of maidens devoured. In fact he’d probably think he’d taken a step up in the world.

As is often the way, when I started to look into The Ballad of the Loathsome Worm, one Worm led to another, and I ended up looking at three: one the primitive ballad running through my head, collected by Francis Child (The Ballad of the Laily Worm and the Machrel of the Sea – Child Ballad no.36); one a literary ballad based on a local legend and associated with Bamburgh Castle (The Laidley Worm of Spindleston Heugh); and one that’s another legend from the North East of England (The Lambton Worm). What these have in common is an evil dragon, with a serpent-like body, that terrorises the land. All are described as ‘laily’ or ‘laidly’ – loathly or loathsome. But only one of them (The Lambton Worm) has to be slain – the other two are tragic creatures, transformed from beautiful humans by an evil stepmother, and both needing rescue. I really wanted to write about my fascination with the Child ballad, but as these Worms are easily confused, I’d better deal with the other two first.

The Lambton Worm is probably the best known. The legend has assumed many forms, and has caught the popular imagination in many ways. It has been told and retold since the time of the Crusades (the human hero was a Crusader), has a family curse attached, and became the subject of pantomime and a popular song in the 19th century. I found a powerful parody and cartoon in Punch vol 99 (1890) pp 234-5, where the Worm stands for the slums of London and the Childe who slays it the new London County Council. It is even the subject of an earth sculpture by Andy Goldsworthy, in ‘Lambton Worm country’ in County Durham. It is deliciously gruesome (if that’s what you like). The boy hero, John Lambton, catches a strange eel-like creature when he goes fishing, and puts in a well and forgets about it. He grows up and goes to the Crusades, meanwhile, the Worm (for that is what it is) poisons the well, outgrows it, and devastates the countryside. When John Lambton returns, he needs the help of witchcraft to trap and slay the worm, but it comes at a price. He must kill the first living creature he sees after his triumph over the Worm. He means this to be a hound he has with him – he sees his father first, but kills the hound anyway. Thus his family was cursed from that day. The family still exists, and lives in the same place, and can point to successive Lambtons who’ve died before their time.

The Laidly Worm of Spindleston Heugh has much in common with my Loathsome Worm, but in its literary guise it seems to have absorbed elements of common fairy tales – Beauty and the Beast, and the Sleeping Beauty among others. A King of Northumberland has a beautiful daughter. He is widowed, and brings back in due course a beautiful young queen. She is consumed with jealousy of the princess, and turns her into a terrible and foul dragon. Her brother, Childe Wynde, can turn her back into human form only by kissing the dragon three times. To do this, he needs magic protection, so loathsome is the dragon, but the third kiss turns her back into a fair princess. A very neat and tidy version of the ballad ‘communicated by the Revd Mr Lamb’ was published in A View of Northumberland, by W Hutchinson (1778). There are various antecedents and variants, one of which is the Child Ballad ‘Kemp Owyne’, where the ‘Owyne’ might be a variant of the Arthurian Gawain. Once you start to pull on these threads it’s hard to know when to stop.

But the ballad I really, really wanted to talk about is The Ballad of the Laily Worm and the Machrel of the Sea – Child Ballad no.36. This seems to be the most primitive in ballad form, collected in 1802 or 03 from recitation in the North of Scotland, according to Child. In this version, the Father, who is powerful but not a King, has two children, a handsome son (with no name), and a beautiful daughter, the Lady Masery (or Maisery – what a gorgeous name. I instantly wish I had a daughter, so that I could call her Maisery). The widowed Knight brings home a beautiful but evil new wife, then goes away on some warlike business. The new wife turns the son into the Laily (Loathsome) Worm, coiled at the foot of a tree, and the daughter into The Machrel of the Sea. This time it plays out more simply. The Knight, we assume, comes back to find the Worm striking terror into all and sets off to fight it. The Worm tells him how he has been transformed from human shape, that he has already killed seven champions, and would kill him too, if he were not his father. With the Worm’s tale in his ears, the Knight goes back to his wife and asks where his children are, to which she replies that they’ve gone to the King’s and the Queen’s Court to serve them. The Knight tells her that he knows the truth and insists that she turn his children back into human form. She strikes the Loathsome Worm three times with her magic wand, and instantly he is transformed into a fair young knight. She blows her magic horn that all the fish of the sea obey, but Lady Maisery refuses to come, and says that she would rather stay a machrel of the sea than be bewitched by her stepmother again. Finally, the Knight has his wife burnt as a witch (sorry).

What do I love about this version? Well, I love its primitive fantasy – I think it is the most imaginative of the Worms, in many ways. In this ballad, the Worm is at the centre and tells his own story (the ballad starts with him telling his story to the Knight). There is the amazing image in the centre of the story that the Worm tells:

‘An every Saturday at noon
The machrel comes to me,
An she takes my laily head
An lays it on her knee,
She kaims it wi a siller kaim,
An washes’t in the sea.

The image of a mackerel with knees, comforting her brother and washing and combing his dragon’s hair, is irresistible – although I think we are led to believe that they meet in human form. I find this picture of family love and consolation so touching. I am also entranced by the Lady Maisery’s response at the end:

But the proud machrel of the sea:
‘Ye shapeit me ance an unseemly shape,
An ye’s never mare shape me.’

This is all so original, and so unlike any of the regular fairy tales we’re told. What should the Lady Maisery wish for? To be a Fair Maiden, of course, and to be married to a Brave Knight. But no – she chooses the life of the sea and a day off every Saturday, rather than be beholden to her tormentor. Nobody has tried to borrow the tropes from the better-known tales to tidy this one up. I love it, and I adore the version of it that is (coming full circle) still ear-worming away in my head – the track The Loathsome Worm And The Mackerel Of The Sea, from the album ‘Strange Histories’ by the wonderful but elusive singer James Raynard. He has chosen a splendid, earworm-y tune to sing it to: ‘An Italian Rant’, from Playford’s Dancing Master. Long may this track survive on MySpace – but do please buy the whole album; it is all as good.

So, for the Year of the Dragon, this is not a very auspicious start from me. (Jackie has done a much better job of celebrating it!) I’ve given you three dragons, one of which was an unalloyed Bad Thing and needed to be destroyed, and two of which were beautiful humans trapped in loathly dragon bodies, from which they needed to be released. Not much to celebrate there! I think that Chinese Dragons are a much better bet – they’re anything but loathsome, and, the same as Stevie Smith’s famous cat, they like ‘to gallop about doing good’!

Looking for illustrations for this piece, I’ve been able to find a public domain image only of The Lambton Worm, who at the top of the piece will have to stand in for all three. The drawing is an illustration in English fairy and other folk tales, by Edwin Sidney Hartland. Published by Forgotten Books, 1890. Walter Crane had a great Pre-raphaelite-ish time painting the kissing of the Laidly Worm of Spindleston Heugh (apologies for the poor quality rights-free image). Also, some wonderful new terracotta panels have been created for Bamburgh Castle depicting the legend. But I have not been able to find an image of my favourite Loathsome Worm. Jackie – your mission, should you choose to accept it …….? However, the legend has inspired someone to create a gorgeous bookmark in dragon form, so this link will have to do for now.

11 comments on “The Ballad of the Loathsome Worm: not the year of this dragon?”

This entry was posted on January 27, 2012 by Hilary in Entries by Hilary, Poetry, Uncategorized.