The Tennis Party by Madeleine Wickham: a book where I really didn’t love all 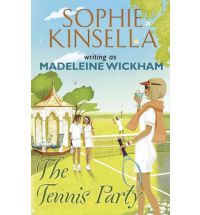 It’s a sunny summer Saturday and four couples gather for a weekend of tennis. Meet the tournament hosts: self-made man Patrick and his brash and beautiful wife Caroline, out to impress with their new country house. Meet the guests: Stephen and Anne, their impoverished former neighbours; social climber Charles and his aristocratic new wife Cressida; and the ruthlessly competitive father-and-daughter team Don and Valerie. As the first ball is served over the net so begins two days of Pimms, tantrums, flirtation, deviousness and shock revelations. It soon becomes obvious that the weekend is about anything but tennis.

First serve: I’m my own worst enemy. I know I should never have bought this book, as I don’t even like tennis, but I’d been lulled into a false sense of security by other, really not half bad, books by Madeleine Wickham, and I decided surely one more can’t do any harm. More fool me.

Love Fifteen: Never mind all that. I couldn’t even find one character I much warmed to. The men were particularly bad: Patrick was a pushy bastard; Charles a selfish loser; and Stephen simply weak and indecisive. The women were, on the whole, only marginally better: Cressida didn’t appear to have one brain cell to rub together, let alone two; Caroline was too full of herself by half, though actually I did get to like her towards the end when she’s trying to sort everything and everyone out; Annie’s actually fairly nice but doesn’t get a lot to do, apart from gasp with horror when she finally realises what an idiot her husband has been. Perhaps she should have been in another novel entirely? And I’m not even mentioning Don and Valerie – I wasn’t sure what they were for …

Love Thirty: The children dotted around seemed quite sensible and I was strangely relieved whenever they appeared. Yes, that is quite a shocking statement for me to make, so you can imagine what the adult company was like. I really wanted to read more about the play the children were performing and the long-suffering nanny. This was indeed the stage of the game where the audience becomes more fascinating than the players.

Love Forty: Sigh. There’s a token lesbian – Ella, Charles’ ex-wife, who unexpectedly attends the party in order to settle some “unfinished business”. Yes, that does mean bonking Charles. Did you think it wouldn’t? Which did make me choke on my strawberries & cream rather, as it’s all a bit obvious. Ella did indeed seem nothing at all like the Ella everyone else was remembering when she was married to Charles, so perhaps she’d been switched during the divorce? That would explain a lot.

Game: Perhaps it was the post-match champers, but I rallied (ha!) at the ending which was quite the best thing about the book. Annie suddenly woke up and sorted Stephen out, Cressida was suitably traumatised by Charles’ disloyalty, and Caroline rises to all sorts of occasions with an alluring sense of aplomb. She even makes that husband of hers, the dreadful Patrick, suddenly seem like the good guy. Sort of. Good for her.

Post Match Wash-up: A decent enough game, if you like this sort of thing. No real stand-out players, though the final match rally was unexpectedly fine. The ballboys and girls were cute, and the weather stayed dry. You might forget most of the details on the journey home, but the champagne was nice, so it’ll help pass a couple of hours or so of your life if you really, genuinely, have nothing better to do. Don’t forget your racquet.

[Anne was always very bad at tennis at school and has no real wish to revisit the game, and now much less so in fiction. Heck, she doesn’t even watch Wimbledon so Should Have Been Warned …]

11 comments on “The Tennis Party by Madeleine Wickham: a book where I really didn’t love all”