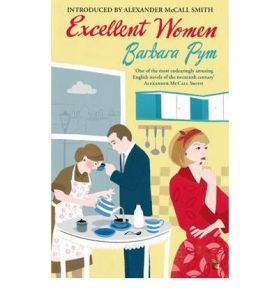 I’m not sure if Barbara Pym’s acclaimed novel Excellent Women really needs another review, but on the off-chance that any readers are out there who have not discovered her work, this is for you.

I have loved Barbara Pym’s novels, especially the early ones, ever since her rediscovery in 1977. This is now such a famous literary tale, but for those who have not heard it before: Barbara Pym’s first novel was published in 1950, and she continued to publish, to popular and critical acclaim, until suddenly she was dropped by her publisher in 1963. After that, she could find no publisher for her work, until in 1977 she was nominated in the TLS by both Lord David Cecil and Philip Larkin as the most underrated novelist of the century. Interest in her novels was instantly revived, they were all republished, her new novel Quartet in Autumn was on the shortlist for the 1977 Booker prize, and she went on to publish several more. Tragically, she died not long after in 1980, at the early age of 66. At that time, I devoured all her novels, agreed wholeheartedly with Larkin and Cecil, and I have re-read them many times since. This review is going to be in part about my latest experience of re-reading Excellent Women – as ever, I have found new things in it!

On the face of it, what is there to get so excited about? Barbara Pym writes about the lives of women in seemingly humdrum situations. Many of the novels revolve in part or whole around the Anglican church. To quote from the heroine of this novel, Mildred Lathbury, these books deal with “… the stock situations of life – birth, death, marriage, the successful jumble sale, the garden fete spoilt by bad weather …”. Please do not look away now – there is a clue in the bathos of that wonderful repertoire, about the pleasures that are to be found in reading Barbara Pym.

The dramas may seem petty – but the imagination and emotions of her characters run deep. However everything is kept under control and anguish is cushioned in irony and humour and self-awareness. Above all, there is the keenest observation of important and incidental detail, of how people interact with one another and how they negotiate relationships, of the gap between what is said and what is meant. In 1977 Lord David Cecil called Barbara Pym ‘The Jane Austen de nos jours’ – little knowing how much that coinage would be debased before 25 years were out. At the time, though, it certainly made us all sit up and take notice,

Excellent Women is set in post-war London and is the story of Mildred, a clergyman’s daughter, who lives in a flat in unfashionable Pimlico. Her spiritual (and social) life revolves round the nearby Anglo-Catholic church, St Mary’s (the incumbent is ‘Father’ Malory, who wears a biretta and is assumed, erroneously, to hold to the celibacy of the clergy). Into the flat next door move the Napiers, an exotic and wildly ill-assorted couple, the wife an anthropologist and her soon to be demobbed husband, a naval lieutenant with the reputation of ‘the most glamorous Flags in the Med’, fresh from organising the Admiral’s social life and putting Wrens in ill-fitting uniforms at their ease. They draw Mildred into a new world of learned society and lectures – a piquant contrast with church and sermons. One character links those two worlds – Everard Bone, Helena Napier’s research partner, unlike his atheistic colleagues a convert and a churchgoer, awkward and prickly, prone to turning up at inconvenient moments, and to bringing out the worst in the otherwise gentle and good-humoured Mildred – very unpromising hero material.

This is a novel of relationships, of couples coming together and splitting apart, and sometimes coming together again. Capable, staunch Mildred behaves like and is believed by all to be a detached observer of all this but she isn’t – by subtle means in the narrative we find out how deeply she too is involved, and where her inner desires (ruthlessly suppressed) might be taking her. It is all so delicately done, and all of a piece with her character as an ‘Excellent Woman’. The world has put her in a particular box, but she stays there only by her own consent.

I was moved to re-read this after the gruelling experience of F M Mayor’s The Rector’s Daughter in which another clergyman’s daughter so agonisingly wears her heart on her sleeve. I returned with such relief to the light touch and wonderful humour of this novel. As ever, I found new treasures in it – and I’ll tell you about one in particular. This is a passage where Mildred meets Helena Napier for the first time, to their chagrin, by the dustbins:

We were, superficially at any rate, a very unlikely pair to become friendly. She was fair-haired and pretty, gaily dressed in corduroy trousers and a bright jersey, while I, mousy and rather plain anyway, drew attention to these qualities with my shapeless overall and old fawn skirt. Let me hasten to add that I am not at all like Jane Eyre, who must have given hope to so many plain women who tell their stories in the first person, nor have I ever thought of myself as being like her.

‘My husband will be coming out of the navy soon,’ said Mrs Napier, almost in a warning tone. ‘I’m just getting the place ready.’

‘Oh I see.’ I began to wonder what could have brought a naval officer and his wife to this shabby part of London, so very much the ‘wrong’ side of Victoria Station, so definitely not Belgravia, for which I had a sentimental affection, but which did not usually attract people who looked like Mrs Napier. ‘I suppose it it still very difficult to find a flat’ I went on, driven by curiosity. ‘I’ve been here two years and it was much easier then.’

‘Yes, I’ve had an awful time, and this isn’t really what we wanted. I don’t at all like the idea of sharing a bathroom’ she said bluntly ‘and I don’t know what Rockingham will say.’

Rockingham! I snatched at the name as though it had been a precious jewel in the dustbin. Mr Napier was called Rockingham! How the bearer of such a name would hate sharing a bathroom!’

Rockingham! Mildred is not like Jane Eyre, but he is called Rockingham! Priceless. I started to look for similarities to his near namesake, and found quite a lot – all the ones that have nothing to do with brooding. Rockingham is handsome alright, but never brooding. Capricious, moody, witty, cruel, kind, snarky – in fact, he is really rather camp – but then, no-one does camp better than Barbara Pym. He’s wonderful. And poor Mildred, despite her protestations, does get some of the Jane Eyre treatment.

As well as negotiating the shocks of dealing with Rocky, Mildred has to endure the status of ‘rejected one’ when her old friend Julian Malory embarks on an (ultimately disastrous) attempt to marry. Cue scenes of parish life, with people rushing up to commiserate with her for losing something she never wanted.

I could go on quoting funny bits – but the novel is short enough (and long enough – it knows not to outstay its welcome). All Barbara Pym’s early novels are brilliant – witty, deceptively profound, full of pin-sharp observation. Of them, the two that stand out for me are A Glass of Blessings, already warmly reviewed by Anne, and Excellent Women. What sets these two apart from the others is that they are both narrated by their heroines. This is what Barbara Pym does best of all – she has consummate mastery of the first person narrative. Everything is described as seen through the eyes and processed through the mind of two intensely sympathetic women – I find it impossible not to identify with each of them as I read their story, and yet they are each so different from the other.

Anyhow – I had never before connected Barbara Pym and Charlotte Bronte, Excellent Women and Jane Eyre – but now that I have, I offer that to you. I look forward to you coming back in the comments to tell me I’m hallucinating.

Footnote on editions: I re-read my 1977 edition. The edition in print in the UK is published by Virago and has an introduction by Alexander McCall Smith. Naturally, I have not read it it, but he is quoted as saying: ‘One of the most endearingly amusing English novels of the twentieth century’. I do not find Excellent Women endearing, and I find it way beyond amusing. To me, this does not bode well. I shall not be replacing my trusty old copy with this one. Harrumph.

This entry was posted on December 2, 2011 by Hilary in Entries by Hilary, Fiction: 20th Century and tagged Barbara Pym, Church of England, Excellent Women, novels set in London.