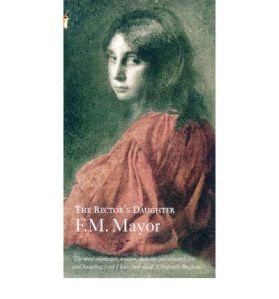 F M Mayor’s 1924 novel The Rector’s Daughter has been kept in print by Virago for many years. Titles have come and gone from its list, but this one has consistently remained. Yet, Virago and Persephone addict though I am, I spent years not being drawn to it. Finally, on a recent day out in Oxford ending in the usual mad spree in Blackwell’s, I bought it, convinced in the end by the quote from Elizabeth Buchan on the cover:

‘The most exquisitely written, delicate, passionately felt and haunting book I have ever read.’

Golly. Hard to leave it on the table after seeing that.

The novel is the story of Mary Jocelyn, daughter of the eponymous Rector of Dedmayne, Canon Jocelyn. He has held the living of this village in the backwaters of East Anglia for over 40 years, and is now in his 80s. Mary is 35. She lost her mother early, and was brought up by her aunt and governesses, until old enough to keep house for her father. Her older sister mysteriously disappeared from her life, into an asylum, but later comes back to be cared for at home.

And so, Mary’s life is mapped out for her, and her world becomes narrower and narrower. Her elderly father has the reputation of immense scholarship and wisdom, but he is living on as if in the years of his prime, essentially as a Victorian survival. To say that he is aloof and distant is inadequate – he seems to exist on another plane of being from Mary, whose confidence in his love for her is shaken cataclysmically from time to time, but settles back into the routine of living with him as his dependence on her for his comfort and well-being is undoubted.

The picture we are left with is of Mary as someone whose capacity to love and nurture is overflowing. But – agape, or eros? When Mary’s fragile sister dies, she is bereft, while the small world she lives in looks on and thinks it is her chance finally to live. But Mary is content with agape, with Dedmayne and its duties, and the care of her father which absorbs her even more. Then, into a neighbouring parish comes the Revd Robert Herbert. Sensitive, scholarly, serious, similar in age, he is a soul-mate for Mary, and it is obvious that love of another kind is growing between them.

Earlier in the book, Mary, on holiday with her aunt, is the subject of a superficial and patronising yet prophetic observation by a smart and smugly married woman in their hotel, that a plain woman can be loved, just once and deeply, because a man might see something beyond looks to engage him. The bitter theme of this novel is that this can happen, but it can be tenuous and elusive, and soulmates can find and then lose one another. Herbert goes away, and (Mr Elton-like) comes back with a smart, beautiful, fun-loving wife, whose presence in a quiet country parish is seen as wildly out of keeping. All is soon not well with their marriage, Kathy (his wife) flees to the Riviera with her unsuitable friends, Robert Herbert’s regrets begin, and so does Mary’s anguish as she watches his unhappiness. How this plays out is quietly tragic and wonderfully original. I have never read a novel quite like this one.

This novel covers ground that is familiar – I was reminded of Barbara Pym’s equally self-sufficient spinsters, ambushed by emotions ruthlessly suppressed in a life of contentment and humdrum respectability (Mildred in my favourite Excellent Women being a case in point). But the tone of the novels could not be more different. Where Barbara Pym is cool and ironic, and at times very funny, Flora Mayor is in deadly earnest. She pours a tragic sense into prose that is almost primitive in its raw simplicity. Here is a passage that typifies Mary’s relationship with her distant, Victorian father:

When the parish phase passed, her energy found vent in writing. One day she showed her father in pride and trepidation an article she had finished on Education.

He read it and said “Yes, it is not a bad way of clearing the mind to write down your ideas, however crudely, though in this case I should have suggested waiting until you had a little more knowledge.”

She felt so dashed to the ground that she must resist him. She asked if he would show the article to his publisher. He had never been able to make allowance for youth, and he opened his eyes, which were often half-shut, and gave her a look before which she quailed. With the look came the words “I should be very sorry if anyone of our name gave this kind of work to the public. No-one should attempt publication until he is sure he has written the very best that is in him. In a few years’ time you will thank me for what I say now.”

Mary tore her article up and threw it into the paper-basket.

“Yes” said Canon Jocelyn “I think that is the best place for it.”

And yet, after that, Mary continues with her quiet life with him. The ripples race across the pond’s surface, and all is smooth again. Mary Jocelyn carries on sublimating this amazing capacity to love and be loved in selfless care for others and in duties to the parish. When the chance of mutual happiness comes along, she misses it, but completely lacks the weapons to fight for it – including any sense that she deserves it.

I spoke of Kathy Herbert as coming into the district rather like Mrs Elton. Flora Mayor however does not treat her as an Austen-like figure of fun. She is depicted as brittle, wisecracking, hard-riding, hard-living and someone who covers her emotions a laugh and a joke. She shows her coarseness of spirit in giving people she does not understand ugly nicknames (her husband is ‘Crab’ and Mary is ‘Towser’). I started out thinking that the author meant us not to like her and to compare her unfavourably with Mary – however, this novel is so clear-sighted about the condition of women’s lives that she too invites our sympathy through the different trials that her beauty and sex-appeal bring – remember the patronising comparison of the fates of plain and attractive women – neither can be guaranteed a bed of roses. Circumstances bring Kathy and Mary together, Kathy temporarily being the one needing Mary’s loving care, and then they spin apart. In the end, one is left to ponder on how far each of them was a victim and how far each transcended that – also, how far the decent Robert Herbert wronged the one by marrying her, and the other by not.

In a sense (and perhaps you can tell from the quotation above) The Rector’s Daughter is rather a gruelling read, such is the raw emotion that Flora Mayor puts into her prose. There is no distancing irony or humour – its serious tone is relentless. If this were being considered as a Happy Read, I would give it a reluctant 1.5/10 for catharsis. But I wouldn’t have missed it, and I do recommend it. I can understand why this novel is regarded as a hidden gem.

7 comments on “The Rector’s Daughter, By F M Mayor”