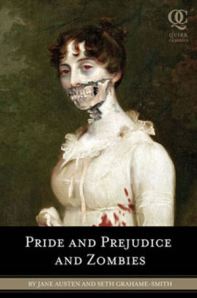 So begins Pride and Prejudice and Zombies, an expanded edition of the beloved Jane Austen novel featuring all-new scenes of bone-crunching zombie mayhem. As our story opens, a mysterious plague has fallen upon the quiet English village of Meryton – and the dead are returning to life! Feisty heroine Elizabeth Bennet is determined to wipe out the zombie menace, but she is soon distracted by the arrival of the haughty and arrogant Mr. Darcy. What ensues is a delightful comedy of manners with plenty of civilised sparring between the two young lovers – and even more violent sparring on the blood-soaked battlefield. Can Elizabeth vanquish the spawn of Satan? And overcome the social prejudices of the class-conscious landed gentry? Complete with romance, heartbreak, swordfights, cannibalism and thousands of rotting corpses, Pride and Prejudice and Zombies transforms a masterpiece of world literature into something you’d actually want to read.

If – when I was eleven – you had asked me to name my favourite book, the answer would undoubtedly have been Austen’s Pride and Prejudice. Lizzy Bennett was just so intelligent and funny and confident, and I wanted to be her. I wasn’t as keen on Mr Darcy, because quite frankly if someone had spoken about my family as if they were defective representatives of our species then that person wouldn’t have been given a second chance. Plus, in my eyes, Mr Darcy was essentially a moody boy, and I was convinced that moody boys were overrated.

However, as much as I loved Pride and Prejudice (and I really did love it) there were a few things I didn’t understand in regards to the plot. Such as why the Regiment was posted in the middle of the countryside, leaving the officers with nothing much to do except flirt with local girls and attend balls. Also, I could never think well of Mr Bingley for dumping Jane simply because of Mr Darcy’s interference. Could a man really be so greatly influenced by his friend that he willingly abandoned the woman he loved? Furthermore, I was left deeply confused and disappointed by Charlotte’s decision to marry the odious Mr Collins. These points were baffling to my pre-teen brain and that bafflement has only slightly lessened in the intervening years.

The mash-up novel I am reviewing today addresses these issues and provides an interesting explanation for them: zombies! That’s right, Pride and Prejudice and Zombies (created by American writer, Seth Grahame-Smith) can account for the militia being in the countryside in great numbers: they are there to battle the zombie threat! Mr Bingley doesn’t abandon Jane because he believes her uninterested in becoming his wife, he leaves her because he suspects (after “the bad cold incident”) that she has been infected with the zombie plague. And Charlotte doesn’t marry Mr Collins simply because she has given up on true love and thinks she won’t get any other marriage proposals, no, she’s been bitten by a zombie and only has a few months left to live, so she chooses to turn into an “unmentionable” away from her friends and family! You see, it all makes sense when you add in some zombie action.

It’s not all horror and mayhem though. There are some rather funny moments woven throughout the text. Like this one:

As they made for the house, Elizabeth and Darcy happened upon a herd of unmentionables, no more than a dozen in number, which had quartered itself in a garden not ten yards from the road. The creatures were crawling on their hands and knees, biting into the ripe heads of cauliflower, which they had mistaken for stray brains.

Elizabeth and her sisters are rather different in an England threatened by zombies. The girls have been trained in the arts of the samurai and they carry swords with which they despatch any zombie unlucky enough to cross their path, and strangely, the addition of these exemplary fighting skills doesn’t feel particularly unbelievable – after all, the Bennet sisters do seem to have a fair amount of spare time on their hands in which they could practise martial arts if they so desired. If I’m perfectly honest, the girls depicted as ruthless killing machines seems to fit well with their various personalities. Girl Power? And then some.

Zombies aren’t the only new addition to the world of Pride and Prejudice. There is also a fair sprinkling of ninjas in the text – Lady Catherine employs many of the ninjas – although I didn’t find the ninjas quite as interesting as the zombies, because naturally they weren’t as menacing as the zombies.

Parody novels that involve much-loved classics of English literature are obviously not going to be everyone’s cup of tea. However, if I could travel back in time and present a copy of this book to Jane Austen, I’d wager that it would make her laugh. Or at the very least smirk. For heaven’s sake, Elizabeth carries a Katana sword and very nearly beheads Mr Darcy! If that wouldn’t be worth a smirk in Regency England I don’t know what would be.

The only real negative I have to mention in relation to Pride and Prejudice and Zombies is that I rather wished there were more zombie scenes. The working class, more peripheral characters tend to be the ones killed and eaten by the zombies, and it might have been refreshing if one of the main characters had been attacked and eaten. Yes, Charlotte is bitten but we don’t see it occur. Why not have made Jane into a zombie, for instance? Zombieism would certainly have given her character a bit more oomph. Or have a zombie eat Mrs Bennet? Or Mary.

To end this rather silly review of a gloriously silly book, I would like to discuss the fate of Wickham, who in my humble opinion does not receive a bad enough comeuppance when left to Austen. Here he receives the harshest possible treatment at the (super-violent) hands of martial-arts-expert Darcy. True, violence is not generally thought to be the answer to one’s problems in life, but it certainly is in the world of Pride and Prejudice and Zombies.

To read more about Pride and Prejudice and Zombies, click here.

Lisa has just released a gripping teen novel, SNAKE BEACH, which is available in e-book form here and here.