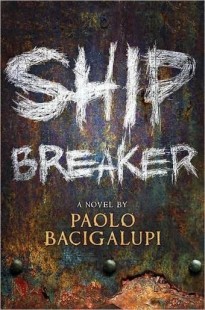 Dystopian literature for teens is really big just now. Perhaps all this surmising about our future has something to do with the shaky ground we’re on in the present.  Whatever the reason there are a slew of future imperfect novels either on the shelves or heading there soon, predicting the mess we may all be headed for.

I first heard about one of these, Ship Breaker by Paolo Bacigalupi  through a blog post by Maggie Stiefvater (of whom I am a huge fan!). And because she gave me 10 bloody good reasons to read this book, I did.

Now that I have, I’d like to expand on her list.  Not that I don’t agree with all her points – I most certainly do – but this is SUCH a great book, I want to talk even more.  So go and read Ten Reasons To Read SHIP BREAKER … and then I’ll give you 10 more and you’ll have 20 reasons.

11)  Not Dystopian Dismal – Ship Breaker is set in the future.  A future where life is pretty rubbish for the kids who spend their entire day scrabbling around in all the wrecked oil tankers looking for salvage.  They’re small enough to get into tiny pipes and bring out the copper wire that can be sold for scrap.  And yet, they don’t hate us for making a total mess of the world.  There are storms beyond compare, the sea level has destroyed vast land masses and pretty much ruined everything.  And yet, none of them complain about their lot in life.  They just get on with it.  This isn’t a “Hell Stop with Spoiling the World… or else” story.  And yet it is.  You get the message, but it’s subtly done.

12) Motivations – The main character is Nailer.  He’s the one who crawls along the pipes and brings out the wire. He’s part of a team, and the team look after each other.  Now Nailer could be a hard, bitter kid – his life is bad enough for it – his father is a total horror, he’s pretty much always starving, he lives on the beach under some palm fronds and rubbish.  And yet, he’s not.  In fact he questions his actions all the way through the story… why has he not turned out like his dad? And this makes him so interesting and really fuels his motivation.  It makes him a totally compelling character to follow.

13) Tension – I don’t think I’ve ever read a book (and I’ve read thousands) that has had me biting my nails as much as this one.  And I don’t bite my nails! It was horrible but in such a good way.  I felt my heart racing… literally.  If anyone out there wants to know how to do tension sensationally, then this is the book to read.

14) Unexpected twists – A beautiful clipper ship is washed up after a storm and on board is a dying girl.  She is wealthy and has more money than Nailer and his friend Pima have ever dreamed of. This sets in motion a series of events that you just cannot predict.  (And I am always trying to do that!) The story took me to places I wasn’t prepared to go.  And it was full of surprises.  I loved that.

15) Inventiveness – there were so many cool things to say woooo over.  The phosphorescent paint that the scavengers smeared on their foreheads so they could see in the pipes, the branding of the teams so you knew who they worked for and if you were sacked the brand was cut off, the half men, the organ harvesters… yes, woooooo.

16) The language –  a swank, Lucky Strike, Rust Saint… I found myself using these terms in real life.  The only time I’ve ever done that before is when I yell “10 points to Gryffindor” whenever my kids do something good (yes, I am that annoying!) .

17) Horrible choices – I’ll never forget Writing 101, Lesson 1, Part 1, (a) – Make your characters choose between bad… or worse.  This novel has that in spades!

18) A world you want to live in – yes, I know, I’m weird.  But despite this being a dystopian novel I wanted to go there, live there and be part of Nailer’s gang! (Maybe for a long holiday…)

19) Equality – There are lots of girls/boys/women/men in this story, but not once was the differentiation made.  Never.  They were all equal in work, in fighting, in choices, in absolutely everything that happened. That was bloody brilliant!

20) Tool – Yes, sorry, I know that’s a duplicate…but… not sorry actually.  You have to read about him and you’ll see.

So there you go.  You have no excuse.  Honestly you won’t be sorry, I lost myself inside Ship Breaker and I wanted to stay there.  It is without doubt one of the most phenomenal novels I have ever read. And I don’t say that lightly. (And if anyone reads it and wants to add another 10, I’m sure there are at least 30 reasons to read Ship Breaker :))

It’s only available in the UK in hardback just now, but the paperback is out in July.