Vivaldi and the Number 3 by Ron Butlin: from delight to disillusionment in 200 pages 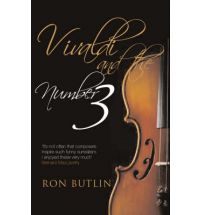 In these playful vignettes, Ron Butlin looks at the lives of the great composers and philosophers from unusual but always entertaining angles. Vivaldi’s creative block is freed with God’s gift of the number 3; Mozart struggles for financial independence by becoming Salzburg’s first private eye; Haydn’s publicity benefits from an appearance on the Jerry Springer show … Many previously undocumented events from the history of Western civilisation are relayed here with a zany touch and a delicious sense of the absurd.

This is one of those books that I’ve had for a while, started once, gave up on, but then kept just in case I felt more in the mood for it later. Well, later turned out to be about five years or so and I only rediscovered where I’d put this collection of short stories when we were doing a grand tidy-out of the flat recently.

So I started it once more, being particularly enthused as I’ve always had a soft spot for the short story. And I have to say that at the beginning the whole energetic surrealist approach to little-known aspects (in so many ways!) of the lives of the composers and the odd philosopher or two utterly charmed me and I spent the first pages chortling away and yelping in delight. Quite a frightening experience for my husband at the other side of the breakfast table really, but then he is used to this kind of behaviour … Anyway, how can you resist this beginning:

Never having seen a sheep in Venice, junior-priest Antonio Vivaldi began counting cardinals instead, cardinals jumping off the papal balcony. Cardinal number one, then cardinal number two went leaping over the stone balustrade in a swirl of burgundy-and-scarlet cape.

Fabulous image and one that still stays with me. Strangely though, after this very positive beginning, I found it didn’t take me long to become rather wearied of the whole routine and I began to understand why I’d given up on it previously. Not to say that these stories aren’t charming, witty, erudite and beautifully surreal, and I particularly loved the way Butlin kicks time zones into touch with pizzazz so that composers have their mobile phones and worry about supermarkets etc etc. But I have to admit that after a while the format became distinctly wearing and I couldn’t really tell one composer from another. Then again, I’m a musical dunce so readers who know their music and composers may very well get much more out of these than I did.

That said, the writing is indeed lovely and very vibrant, though still keeping that hint of quasi-Byronic undercutting humour:

For the last few months the city of Hamburg had come to a complete standstill; the hands of every clock and watch remained stuck at a quarter to five on a winter’s evening. The sea mist that had once soaked into the cobbles and saturated the masonry of the houses now oozed back out of the stonework like so much chilled sweat; the rigging of the motionless ships on the Elbe hung slack with moisture that dripped and dripped … Low sagging cloud and the Baltic seeped into each other along a horizon that was never more than a few yards away. Everyone knew it was Brahms’s fault.

I also enjoyed both Alma Mahler’s story and the final story where we get a glimpse of the women in the composers’ lives, as that felt very refreshing after the mainly male-dominated focus of the book.

However, reading this collection felt very much as if there’d been a knock on my door and I opened it to see a very witty and charming person on the threshold whom naturally I invited in to spend an evening of bonhomie. But after the first couple of glasses of wine and the third very entertaining story from my unexpected guest, I became increasingly desperate for him to leave and by midnight I was bundling him out of the door, whilst sobbing and begging him not to come back. No matter how wise and witty his conversation. If you see what I mean.

So perhaps this is a book to be enjoyed in small doses. Because it is good and please don’t think it isn’t. It’s just rather overwhelming if you read it all at once, so I suggest that you have something else more substantial on the go, reading wise, and dip into this one for the odd story when you’re in the mood. Much like appreciating those one or two mint chocolates after the Christmas dinner – don’t try to hog the whole box!

[Anne enjoys a short story collection as much as the next person, but probably needs to update her musical knowledge. She’s written short stories about arty matters herself, now and again.]

6 comments on “Vivaldi and the Number 3 by Ron Butlin: from delight to disillusionment in 200 pages”