The Liberation of Celia Kahn by J. David Simons + GIVEAWAY 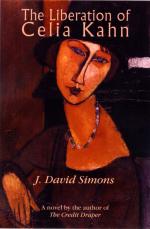 Glasgow 1915. Set against the background of rent strikes, anti-war sentiment and a revolution brewing in Russia, a young Jewish woman from the Gorbals gains her first taste for protest and female solidarity. Her political sensibilities are fired up even further by a personal trauma that leads her to campaign for the betterment of women’s lives in the city. But distraction from her crusade comes with a love affair exposing her to the prospect of a new life in communal settlements taking root in British-mandate Palestine. This novel is not only about a young woman trying to find her way in the world of men, but also the story of a new world for women opened up by socialism and contraception.

As blurbs go, I thought this one was very good and it certainly had me keen to read more. Feminism, socialism, contraception? Even more than this my eyes detected talk of British-mandate Palestine and in 1915, no less, which was shortly before members of my own Armenian family arrived there. Heavens, I thought, this novel could have been designed just for me.

The story’s protagonist is as expected a Miss Celia Kahn. Celia is a young girl of no fixed opinions at the start of the novel and one imagines a wide-eyed ingénue in a floury apron. Her gambling and boozing uncle has told her a few things about the wider world, but when Celia meets matter-of-fact feminist and socialist Agnes Calder in a Glasgow sweetshop, Agnes decides to befriend Celia and educate her in the ways of tenant rights, direct action and feminism.

The following passage comes from Celia’s second meeting with Agnes and gives a flavour of the power dynamic in the early stages of their friendship:

“Tell me what you know about socialism.”

“You’ll get no polite chit-chat from me, lass. Socialism. What do you know about it?”

Celia picked up a sugar cube with a pair of silver tongs, watched as the granules dissolved in the brown murkiness of her tea. “I know what it means.”

“It is the political philosophy of putting people before profit. Rather than profit before people.”

Agnes wriggled herself upright in her chair. “My, my, my. Who told you that?”

“And is this uncle of yours some kind of a Marxist?”

“He works for one of the warehouses in the city. Selling goods in the Highlands.”

“I see. Well, do you have your opinion of how we can put the poverty of the masses before the profit of the few?”

She didn’t know if she had opinions on such lofty subjects. After all, she had never been asked about them before. “I believe there is injustice in the world,” she ventured. “I just don’t understand why.”

“Now that is what I would call a sensible answer. It is important to admit what we don’t understand. That is the first step towards wisdom.”

Celia was relieved her admission had elicited such a positive response. She was also relieved when Agnes went quiet as she directed the attention of her fork towards her slab of cake.

Indeed. I imagine I would have been relieved too. But Agnes is unashamedly political and proud, and she sees in the young Celia a person with the potential to become her protégé. It is fair to say that Celia becomes infinitely more interesting when she crosses paths with Agnes.

Some of the historical fiction I’ve read in the past year has been a little on the dry side. You know, a bit of the old ‘info-dump’ here, a bit of stretching the plot to include a notable event there… The Liberation of Celia Kahn, however, is a thoughtful, neat and plucky book, much like its heroine. J. David Simons is brilliant at capturing the little oddities and foibles of his characters. In this respect (and also in his deft handling of his research material) the writing of J. David Simons reminded me of the work of one of my favourite novelists, Stevie Davies. In the sharp characterisation, there is almost an eye-winking at the reader, a sort of ‘come on, you know someone like this too,’ that I very much enjoyed.

The novel made me think of the bildungsroman tradition and the Celia of the end of the novel is very different from the naive young girl that we meet at the start of the book. The mature Celia takes it upon herself to become educated about family planning – a subject that would have mortified her before meeting Agnes. Which leads me onto the topic of contraception. The book is a riotous celebration of female empowerment and it considers the very important role of contraception within that. Celia witnesses first hand the terrible situations in which women find themselves when contraception is not available, and following Agnes’s lead, Celia makes the availability of contraceptives to women (in this case ‘the French Cap’) a priority in her life.

A note of caution, however: I would not class this as a romantic novel. Although the blurb mentions a love affair, I would contend that the romance element is relatively minor in the grand scheme of the novel. This is a book about politics. About Feminism with a whopping great F. About socialism and the collective might of the people. It is about rent strikes, female love and concern, and it is about the effects of war on the ones who are left behind to serve in different ways far from the front lines of battle. If that makes the novel sound a little too worthy, then the fault is mine. The novel’s big ideas are handled expertly and far from alienating this reader, I wanted to whoop and jeer with the women who protested in their hundreds against the injustice of rent increases and evictions, and to cheer on the women who went against convention, religion and propriety to show each other how to correctly insert a French Cap.

For a chance to win a copy of The Liberation of Celia Kahn, simply leave a comment below and be sure to enter a valid email address. Draw on Sunday 20th February.

13 comments on “The Liberation of Celia Kahn by J. David Simons + GIVEAWAY”