One Day at a Time: A play by Phil Fox. Outside Edge Theatre Company. 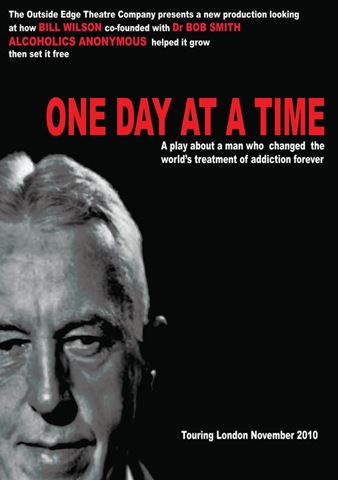 It’s tough being a god – especially when you’re a middle-aged, chain-smoking, recovering alcoholic whose chronic womanizing has driven your wife to a heart attack.  Such a  man is Bill Wilson: an icon to millions as the co-founder of Alcoholics Anonymous and a self-centred pain in the neck to his loyal and incredibly long-suffering wife Lois.

Haunted by his past and uncertain of his future Bill finds his semi-mythical status increasingly hard to cope with and, as the play opens, he is contemplating the momentous step of effectively yielding control of AA to its members.

In a St Louis hotel room, on the eve of the historic 1955 convention, Bill and Lois Wilson are bickering. She is trying to live her own life – to look after herself even as she watches over her erratic and infuriating husband.  To that end, she has founded Al-Anon, the self-help organization for families of alcoholics.  She wants to go out and

meet up socially with her Al-Anon friends but Bill plainly wants her to stay with him.  Something has disturbed him.  There is a secret at the centre of the Wilsons’ marriage which only emerges by inches as the play progresses.

There are also emotional wounds buried deep within the man known to millions of recovering alcoholics around the world as ‘Bill W’ – wounds he has to confront directly if he is to stand any chance of having a life worthy of the name . . .

There is a paradox at the heart of Alcoholics Anonymous.

Alcoholics who finally decide to attend AA meetings – usually as a last resort –  do it for themselves.  They go in the hope of  breaking their dependency on alcohol, and at those meetings they encounter other people with the same problems, who therefore understand what they’re going through.  Those people help them and they in return help others.  They are both paying it back and paying it forward.

When Bill W first met with fellow alcoholic Bob Smith – his AA co-founder – he told him, “I’ve not come here for you,  I’ve come here for me”;  and therein lies the paradox.  It’s mutual self-help born of self-interest.

Given the subject matter, it’s no surprise that One Day at a Time is both painful and poignant.  Less expected however is the warmth and humour of the play, coming not from snappy one-liners but

from the familiar, irritable affection of long-standing relationships between people who genuinely care about each other.

Phil Fox has both a disquieting understanding of what makes people tick and  a  remarkable ear for dialogue.  The play’s action flows smoothly, drawing us quickly into the heart of not only the Wilsons’ complex relationship but also Bill’s damaged psyche.

The staging is refreshingly minimalist, but the period feel is nonetheless authentic.  Most of all, however,  the performances are uniformly excellent.

Cathy Walker’s Lois is a fragile woman with a rod of steel up her spine.  When Bill metaphorically  kicks her in the teeth she is temporarily winded but undiminished, coming back at him with a graphic demonstration of the old saying, “the bigger they are, the harder they fall”.  Her palpable love for her wayward husband, right or wrong, is the glue that holds the play together.

Jay Benedict’s Bill Wilson, on the other hand, although physically the stronger, is by far the more vulnerable of the two; a charming, manipulative man-child who wants to be better than he is but doesn’t know how – until the cathartic moment when he finally 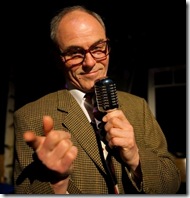 confronts his hidden pain, in an uncomfortably convincing display of raw emotion.

Meanwhile, in the shadows is Mike Haldon’s staunchly sensible Dr Bob … by turns mentor, tormentor and – in one gloriously surreal scene – song and dance man.  He’s a man bemused, knowing he shouldn’t be where he is, but realizing that he’s there for a reason so he’d better get on with it.  He it is who finally forces Bill to face his demons – leading eventually to AA being given the steerage of its own course, for good or ill.

Theatre really doesn’t get any better than this.  In a theatrical landscape overstuffed with high-tech musicals and tourist-pleasing old warhorses, One Day at a Time slaps you in the face and, what’s more, it makes you think – which is something most people do far too little of.

The Outside Edge Theatre Company is the only professional theatre company in the UK that provides theatre and drama work with people affected by addiction.  Once a year it stages a professional theatrical production that tours London.  This year’s was “One Day at a Time”, in which Vulpes Libris’s regular contributor Jay Benedict played Bill Wilson.

You can read an interview with Phil Fox HERE.

12 comments on “One Day at a Time: A play by Phil Fox. Outside Edge Theatre Company.”