Reynard the Fox – or the Ghost Heath Run ~ by John Masefield 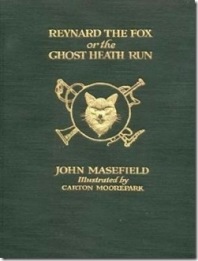 Most of my youth is a blur.  I’ve never been one of those people who can recall their childhoods – or even their  early teens – with pinpoint clarity.  Having said that, there are one or two moments that stand out from the general background haze like lighthouses on a darkened shoreline.

I’m sitting in an old-fashioned schoolroom in the south of England – the Victorian kind, with high ceilings and long tall windows that have to be opened with those specially designed hooks on long poles.  There’s a blackboard at the front.  A real one.  The sort you write on with white chalk and erase with a felt duster on a wooden block.  The English Lit teacher is sitting at his desk, at the front of the classroom wearing his university gown – as all teachers did then.  I remember always admiring the white fur trim.

It’s sunny and warm.  It’s summer:  we had summers then.  We’re all sitting in rows at our desks – the wooden kind with lids and inkwells and the initials of past students  scratched into the surface with compasses.  And we’re reading Reynard the Fox out loud.  Not all of us – not by then;  it’s  just a few – the ones who enjoy reading aloud and do it quite well.  When we started the poem everyone took turns, but eventually there were about six of us who were happy to do it without coercion.  The rest are listening, or dozing.  The teacher doesn’t seem to mind.  He’s as immersed in the poem as we are.

My sympathies are all with the fox.  Masefield’s ability to put himself in the place of the hunted animal – to put US in his place, is almost uncanny.  We run with him; we hide with him; we listen with him;  we even hold our collective breath with him.  I’m appalled and fascinated all at the same time.  I don’t want to get to the end of the poem because of what I’m afraid it will hold but at the same time I have to know what happens …

It’s probably the single most vivid memory of my schooldays (next to bunking off from PE on Thursday afternoons and going for a walk along the Thames instead) and I was curious what my reaction to Masefield’s most famous narrative poem would be now, forty years later, having never once revisited it in those intervening decades.

What actually struck me most forcibly was the extent to which I’d remembered the second part of the poem and almost totally forgotten the first part – apart from the opening lines.  My memories were all of the hunt – of heart-rending passages like:

The fox was strong, he was full of running,
He could run for an hour and then be cunning,
But the cry behind him made him chill,
They were nearer now and they meant to kill.
They meant to run him until his blood
Clogged on his heart as his brush with mud,
Till his back bent up and his tongue hung flagging,
And his belly and brush were filthed from dragging …

In my fickle youth, I’d blanked Masefield’s beautiful character sketches of the people who were meeting for the hunt.  The Squire and his three daughters – two happy and flirty and the other, Jane:

She was not happy being a maid,
At home, with Squire, but she stayed,
Enduring life, however bleak,
To guard her sisters, who were weak,
And force a life for them from Squire.
She had roused and stood his fire
A hundred times, and earned his hate,
To earn those two a better state.

Or the pugnacious Nob Manor:

His big son Nob, at whom he swore.
Swore back at him, for Nob was surly,
Tall, shifty, sullen-smiling, burly,
Quite fearless, built with such a jaw
That no man’s rule could be his law
Nor any woman’s son his master.
Boxing he relished.  He could plaster
All those who boxed out Tencombe way.
A front tooth had been knocked away
Two days before, which put his mouth
A little to the east of south,
And put a venom in his laughter.

I was about to say that it was a different poem to the one that I thought I remembered so vividly – but of course, it wasn’t the poem that had changed.  I had.  Then I knew and understood very little.  Affectionate evocations of early 20th Century rural life and beautifully observed character sketches were of little interest to me.  I paid lip service to them in my essays, of course.  I made all the right noises,  but I didn’t truly appreciate them.

Returning to Reynard the Fox was like carefully re-reading a long letter from an old friend after having skimmed it once and then put it to one side for years.  From being a ghostly presence in my past it has become a fully-formed portrait of a community and way of life that vanished forever in the trenches of the Somme (the poem was written in 1919).

Masefield invited us to sympathise with the fox, but he also wanted us to understand the people who were hunting him – and to mourn with him for a gone-away world.

I also discovered something else; that it isn’t only smells and music that can transport you into the past.  Words can do it, too.  No sooner had I read the opening lines:

The meet was at “The Cock and Pye
by Charles and Martha Enderby,”
The grey, three-hundred-year-old inn
Long since the haunt of Benjamin
The highwayman, who rode the bay.

than I was back in that sunny, tall-windowed classroom, admiring the white fur trim on an academic gown.

There are many secondhand editions of Reynard the Fox available (the one shown is the edition I remember from the classroom) and it can be readily downloaded from the internet,  but I recommend the 2008 Carcanet Press edition, edited and with an introduction by the Masefield  scholar, Dr Philip Errington.