The Good Man Jesus and the Scoundrel Christ by Philip Pullman 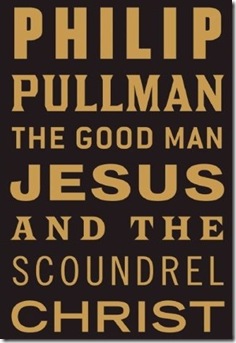 If this were a book about the Prophet Muhammad, it would already have earned the author a Fatwa, and he would be taking shelter in a safe house somewhere, à la Salman Rushdie. As it is Philip Pullman has received his quota of hate mail – not a new experience for him. Others have just been crushingly dismissive. ‘A story about stories falls flat’ – so a reviewer in the Church Times. But what about – ‘Archbishop of Canterbury Praises Philip Pullman’s Story of Jesus’- a headline in the Guardian directing the reader to a review by Rowan Williams on another page? That turned out, as you might expect, to be a thoughtful assessment of the strengths and weaknesses of the book – appreciative of some aspects of it, yes! but rejecting its main thesis. But then headlines are notoriously misleading, as the Guardian itself acknowledged in its ‘Correction and Clarifications’ column a few days later.

So what are we to make of this book? Well, on the back cover it states plainly in large letters, ‘THIS IS A STORY’. And we shall get it wrong if we treat it as anything else. It is certainly not a serious piece of history. There is absolutely no evidence to support the central theme, that Mary had twins, one called ‘Jesus’ and the other called ‘Christ’, and that Jesus was the prophetic visionary, while Christ stayed in the background recording events and ‘improving’ on them, in the interests of founding a Church, so that the message would not die. It is a STORY – so not a direct challenge to the Christian Faith in terms of historical fact – though at other levels it clearly is. But more of that later.

To me it reads more like science fiction – though fiction set in the past rather than the future. And this is borne out by a note at the back. The book, the note says, is one of ‘The Myths Series’. ‘Myths’, it explains, ‘are universal and timeless stories that reflect and shape our lives – they explain our desires, our fears, our longings and provide narratives that remind us what it means to be human.’ The best science fiction does this, which is why so many adults have become fans of the revamped ‘Dr Who’. The myths of Greece and Rome do it too, as do the early chapters of the Bible. They are stories with a purpose – stories designed to explain, illuminate, and so hopefully influence and shape the way we react to whatever situation we find ourselves in at the present moment. The best science fiction is always more about the present than the future, just as the old myths are more about the present than the past. And this book falls into that category.

So what does it have to say that throws light on the present and what it means to be human in today’s world? Well, we begin to get an answer to this quite early in the book, when Jesus is tempted in the wilderness – not by the devil but by Christ! And the temptation? To go for success – through popularity, spectacular miracles, and an all powerful institution.

I can see the whole world united in this Kingdom of the faithful – think of that! Groups of families worshipping together with a priest in every village and town, an association of local groups under the direction and guidance of a wise elder in the region, the regional leaders all answering to the authority of one supreme director, a kind of regent of God on earth! . . And there would be councils of learned men . . to declare what was to be believed and what was to be shunned. . . I can see all doubt vanquished, I can see all dissent swept away, I can see the faithful gazing up in adoration on every side.

Powerful stuff, and the Church has yielded to this temptation often enough – even if Jesus didn’t. And it still finds the whole idea of success seductive, until a Francis or a Bonhoeffer, a Mother Teresa or a Jean Vanier, arises to remind it of its roots in the weakness and foolishness of a God who stoops to become one of us because he loves us and cares for us. And what about our achievement centred society, with its obsession with status, and its marginalising of the poor, the unproductive, the inadequate – not to mention the elderly? Philip Pullman’s main target is the Church, but his barbs find other marks as well, and ones less likely to have built in prophetic voices to help them recover their soul.

As the story unfolds, more sinister elements appear. A mysterious stranger persuades Christ to ‘improve’ his record of the doings and sayings of Jesus in the interests of the Kingdom of God.

In writing about what has gone past, we help to shape what will come. . . If the way to the Kingdom of God is to be opened, we who know must be prepared to make history the handmaid of posterity, and not its governor. What should have been is a better servant of the Kingdom than what was. I am sure you understand me.

This is the ‘Gospel of Spin’, which we have seen more than enough of in recent years. And at a much darker level, it has been the justification for all the lies and manipulations of the truth, which have been the trade mark of every repressive and corrupt regime since time began. Yes, mysterious stranger, we understand you all too well. And thank you, Philip Pullman, for putting it in such a succinct and memorable way.

Finally, of course, the manipulation of the truth moves from words to deeds. Christ is persuaded by the stranger to betray Jesus and impersonate him in a rigged resurrection. So the success of the new movement is assured, in spite of a total loss of faith by Jesus in the Garden of Gethsemane – a loss of faith which eventually moves to a loss of belief in the existence of any sort of God at all.

Which brings me to what is for me the most important question: Is this book a serious challenge to people’s Faith? I said earlier that I didn’t think it was in terms of history, as the story is clearly fictional, but at a deeper level it does claim to represent something historical. Did the early Church, and St Paul in particular, ‘improve’ on the actual facts of Jesus’ ministry and death? This is the question Philip Pullman clearly wants us to ask after reading his book, and there is no doubt about his answer either. ‘What might have been is a better servant of the Kingdom than what was.’ The ‘Christ of Faith’ is the Church’s ‘improvement’ (and St Paul’s in particular) on the ‘Jesus of History’ in Philip Pullman’s view.

This is an not a new question. Most of us thought we had put it to bed when we were students, but it has a way of reappearing from time to time in popular thought. And it always has a certain air of plausibility about it – the simplicity of the gospels contrasted with the sometimes tortuous theology of Paul and others. I won’t rehearse the arguments against this view here, except to point to what has always been the clinching argument for most people who take the trouble to go into this in any depth – that the first Christians were all Jews, with Paul in particular a very strict Jew, and that everything in their upbringing, religious and cultural, would have made it most unlikely that they would have spoken about any human being in the way that they did (‘Son of God’, ‘Word of God’ etc), let alone offered prayers to him, however good and holy that person was. Unless it was forced on them by some overwhelming set of experiences . . which of course is what they said happened!

More persuasive perhaps is the emotional impact of the book. The continual debunking of the Gospel accounts of Jesus’ miracles, with the suggestion that they were all written up, can have a cumulative drip drip effect, especially when reinforced by the culture of disbelief with which most of us are surrounded. That could be serious for anyone who was struggling with doubts already. In fact once or twice I found I had to remind myself of such things as the healing ‘miracles’ I knew of in my own experience – just to counterbalance the atmosphere Philip Pullman was creating. And then there is that long soliloquy in the Garden. I more than half suspect that what we have there is something of Philip’s own personal ‘credo’. It has the feel of a ‘Testimony’, and as such is moving, if not wholly persuasive. For the sense of God’s ‘absence’, which for Pullman’s Jesus is the last straw, has for many Christians turned out to be a major growth point in their personal pilgrimage. As Rowan Williams puts it in his review: ‘You only get anywhere near the truth when all the easy things to say about God are dismantled – so that your image of God is no longer just a big projection of your self-centred wish-fulfilment fantasies’.

So a controversial and thought provoking book. But one which, I am afraid, many will also find deeply offensive. For it tramples on things that will matter to them very much and which they hold sacred. For that reason, if for no other, I wish it hadn’t been written!

The Rt Revd George Hacker was Bishop of Penrith from 1979 until his retirement in 1994.  He was the editor and main book reviewer of ‘Chrism’ magazine for 12 years and is the author of ‘The Healing Stream: Catholic Insights into the Ministry of Healing’, published by Darton, Longman and Todd in 1998. He lives in the Lake District with his wife June and continues to serve as Assistant Bishop in his former diocese.