Roads Ahead, Edited by Catherine O’Flynn 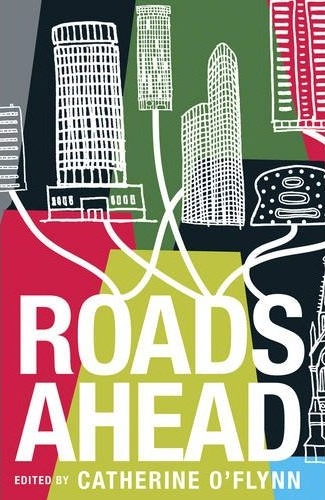 Tindal Street Press is a small regional publisher based in Birmingham. With many prize-winning books on its lists (including three Booker Prize nominees: Clare Morall’s Astonishing Splashes of Colour,  Catherine O’Flynn’s What Was Lost and Gaynor Arnold’s Girl in A Blue Dress) – it is well-known for punching above its weight.

Launched a decade ago with a collection of short stories called Hard Shoulder, Tindal Street put themselves on the map when it came to finding new regional voices – particularly from the Birmingham and Midlands areas.  Now, ten years on, they have brought out a new anthology, Roads Ahead.

Ok, first off, let’s get things clear. I am not a great short story reader. I am part of those much-moaned-about masses that tend to eschew the short story form in favour of other forms. Novels. Or plays. Or even non-fiction (shock horror). Anne Brooke is the great VL short story reviewer; I am just a pale pretender.

But when Tindal Street offered this collection for review,  I jumped at the chance. First, being from a publisher with a strong regional focus, I was hoping to find something different: some interesting settings and specificity of place. Secondly, Tindal Street  invited open submissions for this project – a rare and exciting opportunity for both writers and readers. As Catherine O’Flynn says in her introduction:

“Writers aren’t often invited to submit material. They’re more used to being explicitly asked not to and told that, if they do, their work will just be shredded, or recycled, or made into paper aeroplanes: but on no account read.”

The third reason is the fabulous cover (shallow of me, I know).

Editor, Catherine O’Flynn, likens this collection to a pick ‘n’ mix of sweets – or a “10p mixup” as was common when she was a child: the pleasure being that you don’t know what is coming next. Certainly this anthology is full of variety of locations: we have stories set in Birmingham, Buenos Aires and Nigeria; in locales such as a sealife aquarium, a deserted farm, a drug-riddled estate. There is also a satisfying mix of subject matter.

In general, the collection favours quite traditional stories: character over concept, realism over stylistic experimentation, ordinary life over mad fantasies.  The tone is predominantly young, urban, sharp and observant – and there is an accessibility and lack of pretentiousness to this whole collection that is very likable indeed.

However, despite all this variation of place and subject, there does seem to be a slight similarity of style and form. Most are accessibly written in traditional style. Most have a first person voice that is fairly casual and straightforward. Most use a bit of slang and modern references – but not too much; have a bit of comedy – but not too much; a bit of bleakness – but not too much. Many seem to go for a realistic setting that escalates either into a dramatic dark twist or towards a more downbeat note at the end.

Shooters by Michelle Singh and Six of the Best by Iain Grant both suffer a little from dark twist syndrome. Singh’s writing about place is impressive and Grant has a straightforward likable style laced with dark comedy moments that is very appealing. But the curiously realistic and believable situations in both stories are unbalanced by their slightly overblown endings.

A couple of stories used the macrocosm of outside events in the wider world to mirror the microcosm of personal relationships.

The most interesting and successful of these is Table Rock Lake by David Savill where a black American man tries to find out more about his  white male soldier lover’s  abuses in Iraq. The veil of secresy that hangs over the details of the case seems to mirror the taboo and the unacknowledged and unsaid  that surrounds their own private relationship.

There were some stories that I really enjoyed but wondered if they were more like beginnings of novels than complete stories – particularly those where character came more to the fore. The book opens with the lovely and likeable tale called The Chest. I loved this story – the characters are terrific, the style is easy, funny and engaging, and the premise is bizarre and original (two people squabbling over a chest they find in the street). However, I felt it was slightly let down by the rather predictable short story style ending – the “profound bit” if you like. I understand why it might have been rounded off in this way, but I couldn’t help feeling that the originality of the story and its comedy – yes, comedy – should have been allowed to stand alone. This was one story where I enjoyed the characters so much that I wanted to spend more time with them and I would love to see something longer by its writer, Kathryn Simmonds.

Two of the stories that really stood out for me took very different approaches to each other, yet both felt complete and right in the form. Both have stayed with me and both seemed to capture something true without seeming to try too hard.

Like a sudden burst of Beckett in the middle of all the traditional formats, Since Charlie Hadn’t Come by Chris Smith is like a breath of fresh air, very moving, and beautifully complete. About an elderly man living in rural isolation, this story  is richly imaginative and poetic, changing the tempo and acting as a contrast to the more naturalistic everyday tone  elsewhere. It is a confident story, balancing what it lets us know and what it doesn’t let us know with great skill. With its strong symbolic imagery and confident imagination, it shows how powerful the short story can be and it is the one that – for me – engages most with the form. I would have welcomed more stories that were less traditional in style and tone such as this one .

The other story that I admired greatly – for different reasons – is Kavita Bhanot’s A Float for Shez. This story is the other extreme – so normal, so everyday and very traditional in form, about the subtle shifts and power relations in friendships between schoolgirls, and yet the characterisation is so well done, the understanding of behaviour and emotions so perceptive that it is elevated above the usual. Bhanot has done that other thing that short stories can do so well– captured perfectly the small interactions between people, the seemingly small moments. She does this with her sense of realness – of time, of place, of people: of the way those people interact.  She does not throw it all away with a self-conscious ending, rather she has faith that that she has captured it well enough for it to deliver.  And it does.  Again, this story has a kind of uniqueness to it and a completeness. It just feels right.

Taking the book as a whole, I set to wondering about the considerations and problems of putting together such a collection.  How do we read short stories as readers? Do we take them one by one? Is there a sense of the whole in a book such as this or are we just expected to dip in and out of it? How important is the juxtaposition and placement of the stories? Should they flow together, go together – or should they rudely contrast with each other?

Short story collections, I decided in the end, should ideally be like music albums. Or concertos. Whilst the stories are all separate, there should be some sense of rhythm – even the rhythms of light and dark, comedy and tragedy, the rhythms of theme and setting even….that takes us through from one to the other, so that even whilst we pick and choose we feel our tastebuds watering in anticipation.

Roads Ahead is a lively collection of readable, likeable and interesting stories with a diversity of settings (both national and international), characters and ideas. For me, to have become a really great collection, it needed a wider diversity of writing styles and to have taken a few more risks.  But, as a  fitting way to celebrate 10 years of Tindal Street and as a manifesto of intent for the future, this collection certainly made me curious to find out what roads lie ahead both for the writers featured within its pages and for Tindal Street Press itself.

When she’s not palely pretending to be stern and serious  for VL, RosyB writes comedy novels. You can find out more here.

4 comments on “Roads Ahead, Edited by Catherine O’Flynn”