What I Saw and How I Lied by Judy Blundell 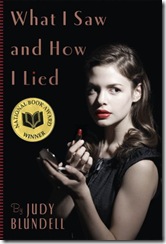 This is not my usual fare at all being slightly allergic to anything remotely historical but I was drawn to the red lipstick on the cover and once I began reading I was a gonner.

Set on post-war America, in the late 1940’s, the setting is vivid and gorgeously realised.  I was completely sucked in by the almost film-noir atmosphere.  The main character is fifteen year old Evie who is desperate to break out of the shadow of her blonde bombshell mother.  A spur of the moment decision by her step-father, Joe, sees them hot foot it to an almost empty hotel in Palm Beach for the summer. Here Evie meets Peter, and falls hopelessly under his spell.  But all is not what it seems and beneath the warmth of the Florida sun something nasty is brewing.

This is a really simple tale, but the one thing that stands out more than anything here is the voice of the main character, Evie.  She picks you up on the first page and you are compelled to listen to her right to the end.  I was captivated. The language is appropriate to the era and adds so much to the atmosphere of the novel. Being a coming of age novel, Evie begins as a somewhat naive girl interested in pretend smoking and wearing heels. The way her voice changes as the novel progresses is outstanding, conveying the darkness and trauma she is experiencing as things go wrong and she is forced to grow up.

I’m not going to reveal the storyline because it would really spoil the unspooling mystery of this book.  There are so many levels to the hints and pointers in the text that all is not right, some Evie isn’t wholly aware of (and some I totally missed!).  And once the questions are asked you’re turning pages like a madman to find the answers.  One of the main themes is anti-Semitism and in a world post Second World War this is extremely well placed and very subtly conveyed.

I was completely captivated by What I Saw and How I Lied and raved about it to all my customers.  In a shop bulging with vampire novels, to find a 1940’s mystery was like a breath of fresh air.  So… what did Evie see?  And how did she lie?  I can bet you’re desperate to find out.

This entry was posted on November 21, 2009 by Eve Harvey in Entries by Eve, Fiction: young adult.