Past Imperfect by Julian Fellowes: The precision of the journey 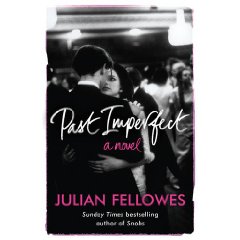 Damian Baxter is very, very rich. But he has one concern, which is becoming more urgent as the weeks go by: who should inherit his fortune. A letter from an ex-girlfriend suggests that, as a young man, Damian may have fathered a child, but the letter is anonymous. Finding the truth will not be easy – and the only man who knows where to look is Damian’s sworn enemy …

One of the great and lasting joys of this book is the delightful unnamed narrator. He is an attractive and charming character, as well as being Damian’s “sworn enemy”, and has a strong sense of perspective and humour about the past as he takes on Damian’s mission to find the missing child. For instance, here’s the narrator responding to Damian’s statement that a later attack of mumps rendered him infertile:

Even in our disjointed, modern society, this is quite a taxing observation to counter with something meaningful. ‘How disappointing,’ I said.

Really one feels for the poor bloke. Above all however, this is a novel about time and its effects on people. The genius here is in the journey and not the arriving. The narrator is forced, mainly through compassion for the dying Damian, to go back forty years to meet the people he left behind. If we’re honest, this is a siren thought to most of us, I think, which is partly where the book relishes its great humanity.

What he discovers is a revelation. And actually I think, looking at people’s lives in general and my own in particular, it’s largely true to say we’re not the people we were thirty, twenty, even ten years ago. Devastating and realistic then that the narrator, like most of us, finds out that many of his assumptions about his friends back then have been wrong or misinterpreted; it is not just he who has changed, but other people also have altered beyond recognition or were never who he thought they were at all.

It’s interesting too how this personal journey throws a light on the character of Damian and his relationship with his former girlfriends so that he becomes a far more rounded figure than the narrator, with his prejudices, is able to reveal. And this is true in spite of the fact that Damian himself rarely appears in the present time in the novel. We largely only see, from the narrator’s viewpoint, how he acted forty years previously. And that of course is open to interpretation. I particularly enjoyed how the reactions of those girlfriends (of which more soon) to the narrator’s quest give a rounded view of the dying man. In the meantime, I must single out the glorious moment at a particularly difficult party when upstart of the season, Damian, punches the insufferable Andrew who collapses full length across the early breakfast buffet – it’s been a long night … Really, you can’t help but admire Damien’s immediate conversation with the very posh hostess:

‘Please forgive me for making such a mess, Ma’am,’ he raised her unresisting hand to his lips, holding it there for a second, with exquisite elegance, ‘and thank you so much for what, until now, has been an enchanting evening.’ So saying he released her fingers, bowed crisply from the neck like a lifelong courtier, and strode out of the chamber.

Bliss. I must also praise the depiction of the sheer awkwardness and repressed emotion of male family relationships, and indeed of male friendship (see this for a light-hearted look at men and their friends, and this for a more serious view) in the novel. The section where the narrator visits his father and everything is conveyed, though nothing is truly spoken, had me in tears. Because it was simply so good and so instinctively true. It is how British men behave. In fact it was so good that I had to stop what it was I was doing (eating breakfast actually – I rarely read books whilst not doing something else), read that section again, put down the book and think about it for a while. Then read it once more. Marvellous. I was late for work as a result, but never mind. The narrator sums up the relationship simply and directly in a paragraph complaining ostensibly about his father’s peculiar sense of geography:

My father was of that generation where London was the highest point in Britain. So he went “up” to London and “down” to everywhere else. I rather loved him for it. I suppose he went down to Inverness, but I don’t remember trying him on this. I cannot ask him now for he has died since I lived through these events. I miss him every day.

The same thing happens with the dinner and post-dinner conversations of the narrator with old friend Kieran de Yong. These sections are both masterpieces of understated grief. I haven’t read anything as powerful or as devastatingly astute for a long long time.

The women in the book are also very interesting and their revisited stories are the first sign that Damien is not the monster the narrator over the years has considered him to be. Lucy’s final comments to the narrator as he leaves, having realised to the point of absolute certainty that she is not the mother of Damien’s mysterious child, are both poignant and uplifting, especially bearing in mind the fact that Lucy’s life has been over the years far more difficult than Damian’s. Dagmar, the second woman the narrator visits, also enhances this change in thinking – both the narrator’s and the reader’s. Here are Lucy’s generous thoughts about the dying Damien:

‘Give him my best love. And say that I wish him nothing but good things. Nothing but good, good things.’ She stepped back from the vehicle and I nodded. Her simple encomium spoke more for Damian’s treatment of her than I would have credited him with.

In fact it struck me that in some ways this book is the story of how women influence social connections and the stories we weave around ourselves, perhaps far more than men do; because of Lucy, Dagmar and the other women, the narrator and we ourselves begin to see things differently. There’s a strong sense of another story – perhaps even the “real” one, or at least one that is just as valid – going on behind what the narrator believes and the story he thinks he is telling. As often happens in real life (whatever that may be), the menfolk’s assumptions are kicked into touch by the womenfolk’s insights.

As you may have gathered by now, this book was for me pretty damn near perfect. But not, alas, quite. There were three issues that drove it down from the Gold Medal position to something floating just underneath those dizzy heights.

First of all, for me, the character of Serena, Damian’s great love, does not work. On any level. The narrator is supposed to be in love with her also, both forty years ago and now, and yet I gained no sense of her as a person in her own right. All the other women in the book were far more interesting and emotionally attractive than she was. I have no real idea why the delightful narrator was in love with her. All I can say is love of course has its own rules, but I would have thought that an author of such obvious skills could have created a more realistic woman. It’s a disappointment. That said, the narrator’s very British irony even when his heart is about to be broken is as ever a treat. Here he is reacting to the sight of Damian and Serena discovered kissing at another party in their youth:

I desperately searched for a phrase that would contain my rage at Damian, my disappointment in Serena and my contempt for the new morality all at once. It was too ambitious. I might have been able to make up a combination word in German, but English has its limitations. ‘You’re busy,’ I said. Which didn’t exactly hit the mark I was aiming at.

My other two negative points are linked together. This book is primarily a book of journeying, and the journey the narrator takes is subtle, complex and real. The problem comes with arrival. Firstly, all the way through the book, we are told that the party in Portugal nearly forty years ago was where it all went horribly wrong. In this way, it acts as a gripping mystery that we, the reader, want to solve. When the narrator finally arrives at the moment of telling it, I’m afraid it’s something of a let-down. Mind you, it would perhaps have been impossible to describe any terrible event that could have torn apart so dramatically the multi-faceted people we have now come to know. And the author’s great skill is in understatement, which sadly he abandons at this point. So, I’m afraid the party dramas are just that: overdramatic and rather unbelievable.

I also think that Fellowes isn’t terribly good at writing the one sex scene we’re given here – again, as above, it is perhaps a question of the emotional journey being more powerfully described than the moment of arrival. My view is that the sex is too generic and bounces us (sorry!) out of the narrator’s viewpoint with a series of hyperbolic statements about the facts of lovemaking that a man in his fifties simply wouldn’t think:

I held her in my arms and, for this one time perhaps, I was hers. I had finally arrived at my yearned-for destination. And although I was so aroused by her presence that I thought I would explode at one more touch, still, when I entered her, the sensation that filled me with a hot glow like molten lava was not just sexual excitement but total happiness.

Nope, that just doesn’t work. At any level. Which proves that even Homer nods. However, Fellowes needn’t despair as other authors are in a far worse predicament when it comes to sex. But here the sex scene should have been omitted and then the thoughts of the two characters involved both before and after the event itself would have been far more precise and touching. Less should have been more and subtlety should have been all.

That said, all three of these writing disappointments are really as nothing when set against the overall power, humanity and sheer delightful readability of this book. No matter its lack of perfection, it’s still a top-class act.

[Anne’s past is far too imperfect ever to be revisited, under any circumstances. To take a sneak peak at the skeletons in her cupboard, please click here.]

10 comments on “Past Imperfect by Julian Fellowes: The precision of the journey”