Whistle Down the Wind by Mary Hayley Bell 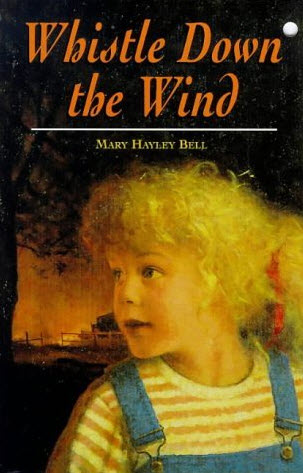 According to Mary Hayley Bell, Whistle Down the Wind arrived fully-formed in her brain – beginning, middle and end – one summer’s morning in 1957. Within a matter of days, the story had been written, bought by her publisher and was on its way to bookshops up and down the country.

On the face of it, it’s a very simple story: a group of children find a stranger in a barn. They not unnaturally ask him who he is and when he, delirious and startled, replies “Jesus!”, they take him at his word.

Meanwhile, out in the grown-ups’ world, an escaped killer is on the loose . . .

The book was already a best-seller when, in 1961, it was turned into a film by producer Richard Attenborough (now Lord Attenborough) and director Bryan Forbes. Scripted by Keith Waterhouse and Willis Hall with music by Malcolm Arnold – and filmed in and around the village of Downham, at the foot of  Pendle Hill in Lancashire – it wasted very little time in becoming a  classic.

The author chose to tell her story through the eyes of a child.  Our narrator is Brat, whose engagingly laconic  attitude to life is brilliantly established in the very first paragraphs:

I am ten, and they call me Brat.

Of course, that isn’t my right name, nobody could be christened with a name like that.

All our lousy first names are birds’ names.  Don’t ask me why.  I imagine our mother was keen on birds and flying, though I don’t know much about her. She flew off some years ago with this character called Peregrine.  She lives in South Africa on a different kind of farm, and once in a way we get a Christmas card – which is quite useful as we keep the stamp.

Brat (real name Brambling), her 12 year old sister Swallow and their 7 year old brother Merlin (who answers to the name of  Poor Baby) all live with their father,  Slim, on a farm in the south of England.  In general, the children don’t have a terribly high opinion of  adults.  As Brat explains, with her customary succinctness:

Now we’re on the subject of grown-ups, generally speaking I think they’re mad.

I prefer kids, I do really.

Grown-ups kill me.  They make so much out of nothing and all that drink turns them into idiots, laughing at nothing at all.

I often wonder if they realise how awful they smell when they kiss you goodnight. Swallow  and Poor Baby and me we reel, but reel, against the stairs after we’ve said goodnight.

As I said, I prefer kids.  They’re more balanced; I mean, they really are.  You see these grown-ups, heavy and downhearted about taxis and the state of the world.

When they find the stranger he’s exhausted and ill – and his request to them not to tell anyone about him until he’s better makes perfect sense to the children because  – obviously  – the Second Coming would attract a lot of attention, wouldn’t it?  And Jesus wouldn’t want to receive shepherds and wise men and politicians when He’s not at His best, would He?  Then, they give it some more thought and they realize that telling the adults at ALL is a risky proposition, because they wouldn’t believe it.  After all – they didn’t believe it the first time round, so why should they be any better now?  The only people they can safely tell, they reason, are other kids … and so the word starts to spread among the local children – while in the periphery of the story the manhunt is gathering pace.

Throughout the story we only ever see the stranger – who we finally find out is called Blake – through the eyes of the children.  They are our only point of contact with him – and it’s a writing technique which forces us to ask ourselves:  How would this man have turned out if he’d always been treated with the kindness, concern and respect shown to him by the children?  They bring him food and toothpaste and cups of tea;  they smuggle him into the relative safety  of the oasthouse;  they give him blankets and their cat – Bette Davis – to keep him warm and, finally, when the Police net is closing in around him they give him the only thing they have left to give – themselves, as a human shield:

There were five of these Porkers-type policemen, but they didn’t have guns like they do on television.  They advanced slowly towards the oast, and just about as they arrived beside the cow-house there was a shrill whistle from Poor Baby.

They stopped and stared.  Personally I think they were scared stiff,

Then Porkers stepped forward and shouted:

Blake!  How silly can you get!

There was nothing but silence . . . no answer . . . He shouted again.  Then he switched on the most gigantic torch I ever saw.  Fascinating really.

Right there in the beam of his torchlight were what seemed to be hundreds of children.  They filled the whole yard between him and the oast …

In the end of course the children have to trust an adult – and inevitably the adult they  choose to reveal their secret to is their Father – who does not let them down.  A slightly shadowy  figure for most of the book, he finally enters the children’s world (and therefore also our world) and in doing so acquires something of the stature of Atticus Finch.

The ending of the novel is ambiguous – which both surprised and pleased me.

Whistle Down the Wind is a children’s book, but the questions it raises – both specifically and by implication – about the death penalty (yet to be abolished in the UK when the book was written), about the human capacity for forgiveness and  redemption, about the power of love and faith – have no easy answers.

It’s just 135 pages long, and in larger-than-average print to boot,  but those 135 pages probably contain more humanity and wisdom than an entire Booker shortlist.

Whistle Down the Wind is not currently in print, but there are many secondhand editions available via AbeBooks.

9 comments on “Whistle Down the Wind by Mary Hayley Bell”

This entry was posted on September 18, 2009 by Moira in Entries by Moira, Fiction: 20th Century, Fiction: children's, Uncategorized.