The Bones of Summer ~ by Anne Brooke 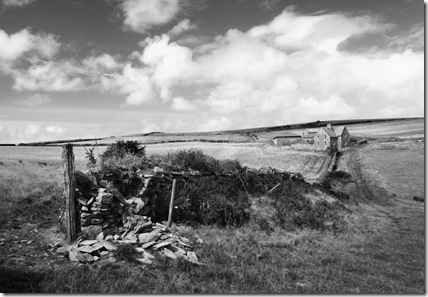 (The moody photograph of a Devon farmhouse is courtesy of  myDefinition on Flickr and reproduced under a Creative Commons Licence.  We decided against reproducing the actual book cover – which is stunning – because we know that one or two of our readers actually have a problem with such images – but you can see it here!)

In the interests of transparency, I should probably point out that the author of this novel – Anne Brooke – is both a friend and a fellow Book Fox.  She’s also a slightly scary and frequently hilarious book reviewer who takes no prisoners.

Plus, she knows where I live.

Having said all of that I’m reasonably certain that none of those factors has significantly coloured what follows – simply because The Bones of Summer is such a stonkingly good read.  (The spellchecker doesn’t recognize ‘stonkingly’ – can’t imagine why …)   While it’s been given a contemporary spin (the two central characters, Craig Robertson and detective Paul Maloney, are lovers and their sexual encounters are both graphically and skilfully written) it is at heart a good, old-fashioned mystery thriller which, in time-honoured style, leaves you guessing right up to the last few pages.

Craig Robertson feels obliged to return to his childhood home – a neglected Devonshire farmhouse – when a former neighbour contacts him to say that his religious maniac of a father has gone missing.  Craig had fled from his home as a teenager after his father discovered that he was having an illicit affair with Michael, a summer guest at the farm, and Craig  soon discovers that Michael, too, is missing.

That teenage liaison and the events surrounding it are to prove pivotal as, piece by painful piece, Craig begins to fill in the gaps in the story and force his submerged memories to the surface.

Interwoven with the detective story is the convincing and well-written love story of Craig and Paul – which is not just window-dressing but plays a crucial role in the narrative.  As the two emotionally wounded men warily circle each other trying to work out where – if anywhere – their relationship is going, they create a central instability which is an important driving force in the novel.

Anne Brooke creates believable, likeable  characters who inhabit the same slightly grubby world that we do.  They certainly aren’t anyone’s idea of role models but that’s why you care about them … because they’re flawed human beings doing their best in an imperfect universe.

Not one for escapists or the easily shocked … but highly recommended to anyone who enjoys a thoroughly well-crafted page-turner that casts a knowing eye over the human condition.

Moira is an unworldly and innocent creature who was educated in a convent and now manages a tiny charity in the Lake District.  She was so startled by the first love letter she ever received that she returned it with the grammatical errors corrected in red ink.  It was, as it turned out, the ONLY love letter she ever received, so she has no idea how she’d react if it happened again.  She always, however, carries a red pen around with her.  Just in case …

6 comments on “The Bones of Summer ~ by Anne Brooke”

This entry was posted on September 8, 2009 by Moira in Uncategorized.