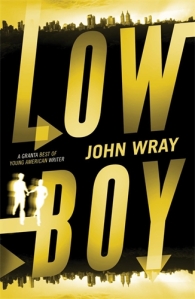 Early one morning, sixteen-year-old Will Heller is seen heading into the New York subway. With each passing minute he ventures deeper underground and further from the world of light and reason. Meanwhile, above ground, Violet, the boy’s mother, reports Will missing and seeks the help of Detective Ali Lateef. They soon discover that Emily, Will’s girlfriend and only confidante, appears to have vanished too. Lateef must navigate the city’s tunnels as well as a labyrinth of Heller family secrets if he is to reach Will and Emily before it is too late.

Now, there’s a blurb I could get my teeth into, I thought, when I began to review this book and indeed at the start it certainly lives up to its promise. It’s an exciting mixture of literary journey and detective novel that is found together in fiction all too rarely. And I speak as a lover of contemporary detective novels who dearly wishes that they would be given a higher literary rating than they currently are. So I was already primed to view Wray’s book from a positive slant from the off.

And what an encouraging impression the beginning pages do make. The depiction of mental illness and how it rubs against the world (both for the sufferer and those he or she meets) is one of the great and lasting joys of Lowboy. This, for instance, had me on the edge of my seat (a fair analogy for an underground journey novel, I feel):

“Most things that happened didn’t bother him at all, but others got inside of him and stuck: nothing to do then but cough them up.”

In fact, one of the eye-opening issues here is how closely the inner workings of Will’s (nicknamed “Lowboy” in the book) mind echo the inner workings of our own. Everyday thoughts do sometimes get stuck in our heads, never mind our mental stability or lack of it, and it’s hard to rid ourselves of the burden. (Or perhaps that is just me?…). I also, as a middle-class red-headed woman in her mid-forties, have enormous sympathy with the protagonist’s view of how other people respond to him:

“Sometimes it happened that he spoke perfectly clearly, taking pains with each word, and no one paid him any mind at all.”

Oh yes, I’ve certainly been there but, in my case, I rather suspect it’s my age and gender, rather than any degree of schizophrenia. One assumes. Still, it’s a clear marker of Will’s humanity and the way that the author makes him into a highly sympathetic character to whom the reader can easily relate.

However, personal bias and the delight of finding my own experience expressed so succinctly within a work of fiction put to one side, the relationship of man (or rather boy) and underground system in the novel is intricately and carefully drawn. Consider these lines for their poetry, clarity and hidden complexity:

“There was only one tunnel in the city but it was wound and snarled together like telephone wire, threaded back on itself so it seemed to have no beginning and no end.”

Here the train system becomes the only world Will really knows, and the two fused together almost become one further personality, far greater than the sum of their individual parts and experience. It is in the descriptions of Will’s journeys through the tunnels that, in my view, this book comes most fully alive. It is also, interestingly, in these sections that the encounters between people (all of them of course including the escaped boy) are richest and most exciting. Here, for instance, is a glorious sentence or two from the conversation between Will and a Sikh underground traveller:

“The moment of revelation made a leisurely circuit of the car, glittering dimly in the air, then passed away without the slightest sound. Lowboy paid it no heed.”

It’s something of a shame therefore when Wray has to leave these moments in order to concentrate on the outside world. For this novel is not just about Will himself. We have two other main characters who also jostle for position: firstly, Will’s mother, Violet, whose primary focus is to track down (apologies – pun not intended) her missing son before any accidents can occur. I found her to be a fascinating character, but in some ways she felt shadowy, as if she is not being given enough to do within the text. Halfway through the novel, I did actually pause and wonder if Violet – and indeed Will’s girlfriend, Emily – were almost characters that needed their own separate book, as they didn’t entirely appreciate having to share it with the menfolk. Or that like Will (and indeed myself), and to paraphrase the author’s own text, they were trying to ‘take pains with each word but no-one was paying them any mind at all’. Or perhaps that the author himself wasn’t giving them the space to be as full and as human and as important as they deserved. Even for instance when the moment of revelation about Violet comes towards the end of the book, I didn’t feel particularly surprised or gripped by it, and I wondered if this was because she hadn’t been fully explored as a character. Similarly, I did especially feel that Emily needed a larger stage. After all, who wouldn’t want to know more than is hinted at here about the inner workings of a girl who was nearly murdered by her boyfriend Will and then is still eager to go on the run with him? I would have loved to have discovered her drives and motives, but I didn’t seem to be given the chance. It felt as if Wray had only just started to pinpoint perfectly the dark edginess of this fascinating young woman when the story moved on and I felt Emily had been abandoned.

Meanwhile, the other major character, the detective Lateef, is also intricately introduced when we first meet him as a cipher-obsessed, whisky loving loner with a fascination for missing persons’ cases and a deep-seated embarrassment about his name. And yes, I do realise that a lot of what I’ve just written makes him sound like a typical fictional detective, something explored by author Mark Billingham in his article on detective fiction and, indeed, Billingham describes modern literary detectives as “men who like a drink and listen to music and have love affairs”, which is in some part who Lateef is. But due to the power of Wray’s writing he has an edge and a wit that I admired and that sets him apart from the crowd.

The only problem I had with him – well actually I had two problems – was that he doesn’t really seem to do enough. He and Violet attempt to track the missing boy across the city, above and below ground, but in some respects the chase feels quite leisurely. I’m not utterly convinced that if you have a potentially dangerous missing boy loose in New York you actually have any time for calm conversation, deep moments of consideration or even for falling in love, but I appreciate this is a literary novel and so the demands of the crime genre may fall a little by the wayside at this point. Still, it did feel slower than it could have done.

The other problem I had with Lateef – which is linked to my first problem – was that I felt he would be better served in another kind of a book. This connection between detective and literary fiction, which I mentioned earlier, is indeed interesting and there must be a way of successfully and fully combining the two genres across a whole novel without the characters losing out that doesn’t involve using an historical setting, but I’m not convinced Wray entirely manages it here. It’s a brave attempt, but for me it doesn’t quite hit the mark.

There’s another issue concerning writing format that I’d like to raise. When I reached the end of Lowboy, I was fascinated to look back and see where in the book I’d made marks of passages or issues I wanted to write about in this review. About 90% of the phrases I found exciting appeared in the first twenty pages and I lay awake wondering for some time if in fact Wray would be better served as a literary short story writer rather than a novelist. I appreciate the man has been nominated for awards for his previous novels so I’m playing with fire by daring to ask that question at all, but as a reader I was most fully engaged with the story and characters in those first twenty pages and over the remaining 230 or so pages I became slowly but surely more disengaged. Some of that is probably due to the fact that I got used to the quality of the writing, but some of it isn’t. It was almost as if Wray himself had shrugged his writing shoulders and said: oh well, I’ve started and I’ve got to finish; I understand I’m good and I can do it with my eyes shut but really I’d rather be elsewhere …

I wonder also how Lowboy would have been if the novel had been told as interconnecting short stories in some fashion with a deep and individual focus on all the characters’ responses to this one event of Will’s escape, so each person was given the full centre stage for a while. All those wonderful people Will meets on the trains could have been included here too. That I think might have been truly exciting.

Forgive me therefore if I sound too negative when far greater reviewers than I have praised this book to the heavens already, and I’m sure Wray has a great writing future to equal and excel his already well documented writing past, and sections of his writing certainly sing here. But I do wonder if these days up and coming writers are being too quickly shoehorned into the novel road when really their literary journey might lie somewhere else. Much like some of the characters of Lowboy indeed. No matter what the market may demand.

[Anne is way too argumentative for her own good. For more information on how to avoid her or to discover the current status of her police record, please click here.]