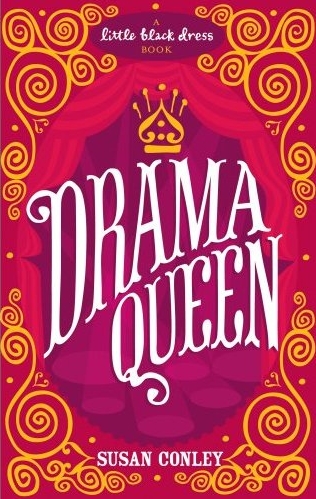 I have long intended to read a book from the Little Black Dress imprint, so thank you Vulpes, for giving me the opportunity!

Jane Boyers is a top New York TV producer who thinks she has it all – the swanky clothes, a carnal relationship with the boss – she even has an Emmy award. In fact her life is so successful, so busy, she has no time even to email her best friend, Miranda, who has left Manhattan to live with her lover in Ireland. No time at all – until her high-powered life crumbles around her and her gut reaction is to board a plane for Dublin, a journey which will end with her starring in a local theatre production directed by the irritatingly sexy Shay…

Drama Queen is a story of contrasts – Manhattan versus the Emerald Isle, cut-to-the-chase speaking versus a sleepy lilt, cocktails versus Guinness, diets versus bacon butties, clinical sex versus allowing yourself to fall in love… And as such, the reader knows right from the outset, where the story is heading – that Jane shall undergo a change instigated by her initially difficult relationship with Shay.

It is an easy read which is ideal for someone like me whose evenings of solitary reading are long gone. I was able to whizz through several chapters whilst playing Jenga and watching TV – I kid not. Plus, I was able to put it aside for a couple of days and then easily pick up the story without having to backtrack. Conley shows skill in changing point of view three or four times in one page – a technique not for the faint-hearted, and yet she pulls it off. Her writing is concise and wonderfully vivid at times, as shown by her description of a character called Bob:

A full head shorter than Jane, he looked about twenty-five, and his hair, spiked by what had to be enough gel to coif a Third World country, sprang up from his skull in erratic chunks. Highlighted as it was in bright yellow, Bob looked as if he’d sprouted daffodils on his head. He wore an outsized, wrinkled suit with an apparent lack of irony and – Jesus, thought Miranda, he’s wearing fuchsia Crocs!

At times in the middle, once the plot and ending were firmly established in my mind, my eye did slip as a sense of predictability increased my reading-speed. Despite this, the setting of the conclusion was an unexpected surprise and I was glad the main characters reached the point I thought they would.

So, next time you are going on holiday, have a few hours to kill on the train or just fancy kicking off your shoes and unwinding with something in front of the box, treat yourself to Drama Queen – accompanied, of course, by a few cans of the black stuff!

Sam Tonge is a writer and blogger and a regular guest reviewer on Vulpes. You can find out more about her on our guest page or visit the website “Strictly Writing”.