The Marshal Trilogy by Elizabeth Chadwick

The Greatest Knight ~ The Scarlet Lion ~ A Place Beyond Courage. 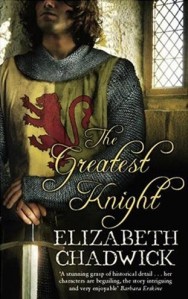 William Marshal pulled off a really neat trick – a vanishing act, no less.

He was one of the most powerful and  influential figures of his age.  He was so well-known, in fact, that he even had a slanderous folk song written about him – Queen Eleanor’s Confession.

And yet, with time, his memory faded from public consciousness so completely that today comparatively few people  – apart from Mediaeval historians – have ever even heard of him.

Actually, that should probably read “Mediaeval historians and fans of Elizabeth Chadwick”, because the author has taken the real life William Marshal and woven a series of beautifully crafted novels around him and his family.  Whether this was foolhardy or brave, I’m not sure. I only know that it worked.

When you write about characters who are entirely of your own invention, no-one can start jumping up and down shouting “But that’s not right!” because they’re in possession of some obscure detail unearthed from a mouldy corner of a forgotten library.  They’re your characters and you can make hay with them.  They can do or say absolutely anything you want them to – no matter how outrageous.

When you write about real people you have a responsibility towards them.  They cannot defend themselves, and it really doesn’t matter that they died some 800 years ago – they deserve the same respect as if they had died yesterday.

Incorporating real people into works of fiction is not, of course, remotely unusual.  An entire industry has grown up around Richard III  – and there can scarcely be a British monarch who hasn’t popped up in a  novel somewhere, up to and including our own dear Queen.  What IS unusual is to see it done quite this well.

Elizabeth Chadwick combines a finely-honed storyteller’s skill with a sure grasp of history to produce a three novels that tell the extraordinary story of the the man who rose through ability, integrity and a well-developed instinct for self-preservation to become 1st Earl of Pembroke and  Regent of All England.  He served five monarchs … from Henry the Young King through to the child king Henry III, remaining fit and active – mentally and physically – into his early 70s … an almost unheard of life span for the late 12th/early 13th Century.

In her hands, William Marshal comes vibrantly to life, along with his equally arresting wife Isabelle de Clare – no mere cipher this girl … but a feisty lady with a mind (and a mouth) of her own.

I read the books in the order in which they were written – The Greatest Knight and The Scarlet Lion first and then A Place Beyond Courage, which is in effect the prequel to the first two.  It tells the story of William’s shrewd and hard-headed father John and latterly of William as a small boy, held to ransom by King Stephen when John elected to side with the Empress Matilda.

Of the three novels – all of which stand alone and don’t actually need to be read together – I personally found A Place Beyond Courage marginally the less involving.  I suspect that this was simply a result of my having become so immersed in the world of the adult William and his family that I found it hard to retrace my steps;  because it’s certainly just as well written as its predecessors, the period is just as well portrayed and the characters are no less well-drawn.  To anyone coming fresh to these three books, I think I’d  recommend reading them in the correct historical order – although of course, you could then run the risk of getting too engrossed in John …

Elizabeth Chadwick serves the Marshals well.  She brings a complicated and tumultuous period of history vividly to life, never letting the romantic elements overwhelm the historical ones.  Many ‘historical romances’ just use an historical background as a vehicle for what is actually a bog-standard love story in long frocks.  William and Isabelle’s real-life love story becomes an integral and  important  part of history – which is of course exactly what it was.

(You will find Moira’s interview with Elizabeth HERE)

20 comments on “The Marshal Trilogy by Elizabeth Chadwick”