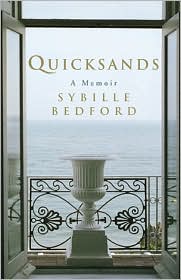 I didn’t know much about Sybille Bedford before I read this – other than that she was born an aristocratic Sybille von Schoenebeck in Germany, married a Mr Bedford to obtain a British passport in the 1930s, and wrote acclaimed novels in English. I haven’t read any of Bedford’s novels yet, either, but I understand they are largely autobiographical, about her childhood and youth, her family and friends. Quicksands covers this same ground. The memoir begins in the ‘fifties, jumps back to the ‘thirties, then to her childhood years in the ‘teens, and back to the ‘fifties (I must confess my poor little brain was thoroughly confused by the matters chronological at this point). The later decades of her life, on the other hand, are quickly summarised in the last chapter, although these were her years of success as a novelist, journalist, and court reporter. Her first book, a travelogue about Mexico, wasn’t published until 1953 when she was in her forties – and this is effectively where the memoir ends, though she lived on till 2006 and says in the book she is writing it in 2001. Does writing begin where ‘real life’ ends? Or is it just that there is ‘no time’, as Bedford says at the end: ‘Wish I could tell the half of it . . .’

And so, the book begins when the writer in Sybille Bedford is born (ellipses in the original):

Writing: to be someone who wrote – books of course – was what I had wished to be from childhood, seeing it as an exalted calling, a vocation, bestowed (by whom?) on me, however unworthy . . . My limitations were large: an almost entire lack of formal education; a lack of facility in getting words on paper – la page vide que sa blancheur défend . . . (I read French early, and it did bite deep); great natural sloth . . . Make me a writer, but not yet. So, no tales scribbled lying on the nursery floor, no essays imposed by school (hardly ever went to school); only a guilty headful of unwritten letters.

If hiding behind your fictions is the typical thing for a writer to do, then Quicksands is a typical writer’s memoir. Like I said, I didn’t know much about Sybille Bedford before reading this book . . . and in some ways, I am not much wiser now. She casts herself as very much an observer in life, and launches into long digressions about the lives (and especially the romantic lives) of her friends and relatives. Her own emotional life is an éminence grise in this book: Bedford says she fell in love often (‘too often’), but if Quicksands is to be believed, its influence on her choices in life was pretty much nil. It took me a long while before I even began to suspect that the female friend she lived with was a lover, and that her naive infatuation with a friend’s wife was something more than hero worship. No doubt Bedford felt that her sexuality was nobody’s business, and more power to her; but at times the anecdotes about her stepfather’s mistresses, sister’s divorces, and friends’ amorous scandals seem like a ploy to divert the attention from herself. Sometimes, as in the case of Bedford’s glamorous but difficult mother, or of her idol Aldous Huxley and his wife Maria, the digressions are fascinating in themselves (and the nostalgic chapter about the Huxleys’ domestic life at Sanary-sur-Mer was probably my favourite). More often, I’m afraid, they are not – I had no idea why I should be so very interested in the love affairs of a Pierre Mimerel, for instance, or in the many friends whose real names she refuses to disclose; even her sister’s husband is known only as ‘D.’ I got the feeling that Bedford has probably made more and better use of all this material in her novels.

Partly this evasiveness may be due to her being unsure about her place in life, as an exile, an outsider, a woman of great sophistication and intelligence but no proper education . . . and as, to use her own term, an ‘escapee’ of history – someone who doesn’t know to whom or what she ‘owes’ her survival, and perhaps feels guilty about being no more than such an escapee. Bedford had a streak of political idealism in her, but not enough gravitas to support it – or so, at least, she seems to have felt. Here she tells about an essay of hers which was published in a radical journal:

I had put into it about everything I ever thought I thought and the pages were bristling with quotations, beginning, I blush to remember, with Paul Valéry: ‘La bêtise n’est pas mon fort‘ . . . (fortunately put into Aldous’s mouth, not mine). Unfortunately I had also dragged in words of my own, words hardly germane to a context of the paradoxes and absurdities of Mexico . . . There was one outspoken aggressive paragraph attacking current Nazi horrors. These indeed had been the themes of several other contributors, grandees of exile; I was aware of the futility of one myself. I merely wanted – very strongly – to stand up and be counted (or more likely not).

Gravitas or no gravitas, Bedford ended up blacklisted by the Nazi régime, and her German property was confiscated; she was in danger of being deported to Germany from France, and the Huxleys arranged her marriage of convenience to one Terry Bedford. (Or, as Maria Huxley put it, ‘We must get one of our bugger friends to marry Sybille.’) To Bedford, this appears to have been no great loss; she’d always seen herself, ‘obstinately’, as an English writer anyway.

Quicksands is like an old jewellery box, a little messy and the gems at times hard to find, but every little episode does have its peculiar charms. Among many other things Bedford tells how she ran away from her father’s castle as an unruly ten-year-old, how morphine was prescribed to calm her mother’s nerves and the addiction killed her seven years later, and how Virginia Woolf turned up at her faux wedding (Bedford couldn’t say why, as they never met again). The memoir has a surprising lot of dialogue, and it resembles a novel in many ways; the narrative jumps around and memories turn up, it seems, unexpected. Stream-of-consciousness memoir – is that a real category? Stream-of-memories? Whatever it is, the book is a quirky creature, and the writing style reflects the author’s character; the occasional dodgy grammar and peculiar turn of phrase (‘Goose is who goose does’) seem to be part of her identity, like every language she has spoken and every country she has lived in. As a matter of fact, the structure of the book probably tells more about her than its contents. I don’t think a rootless existence like this could be captured in a less fragmented form.