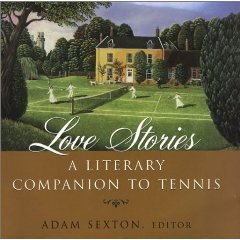 Ah… Wimbledon. This is normally one of the best times of the year for me, which is why a week ago I chose Love Stories for this week’s review. Thanks to certain favourite players losing in the first rounds, however, I locked up my racquet and balls out of sight, cover my ears and scream whenever Wimbledon is mentioned on TV, and have been sulking for days. I was even childish enough to consider not writing about the book at all, and didn’t finish reading it until this morning.

I’m glad I did finish it, though, as these short stories – plus a few excerpts from novels, and one from the screenplay of The Royal Tenenbaums – reminded me the game is not about winning, it’s about… well, actually, it is about winning. But it’s also about jealousy, perfectionism, cheating, broken families, prejudice, puberty, unrequited love, failure, parental pressure, and all manner of loss. (Come to think of it, I can’t remember a single upbeat piece from this anthology, though several were laced with generous doses of black humour.) In many of these stories, tennis – and membership in tennis clubs especially – serves to highlight dynamics of class, race, and culture; sometimes the sport brings people together on court only to underline their differences outside of it. In many others, an off-court rivalry or power struggle reaches its climax on court. There’s something about tennis that brings out your personal – and inter-personal – qualities better than any other sport. It isn’t merely a sport, after all: a great tennis player is not only stronger and faster than his opponents, but he has to outwit them, too. Tennis is art, it’s poetry, it’s life itself… but then, as a tennis lover, I would say all that, wouldn’t I?

In some stories, the tennis connection seems a bit tenuous. In John Updike’s ‘Separating’ and Rand Richards Cooper’s ‘Courtship’, for example, there’s only a dilapidated tennis court in the background, as a relic of a failed marriage; and in Jennifer Belle’s ‘Death and Tennis’ a never-used tennis racquet reminds the narrator of her deceased friend. From ‘The Petition Parade’ by Philip K. Edwards, I mainly remember the gruesome death of a poor little dog. I’ve also never been a big fan of including excerpts from longer works in anthologies, and some of these choices – specifically the ones from Nabokov’s Lolita and Martin Amis’ The Information – add little to the collection beyond the authors’ illustrious names. Nevertheless, I must thank Adam Sexton for including one from David Foster Wallace’s Infinite Jest: on the strength of this delicious excerpt alone, I resolved to get the book in my hot little hands as soon as possible.

The dustjacket boasts of stories from Updike and Wallace to Amis, from Nabokov to Atwood, but to me the real stars of the anthology are less well-known names. In Marcy Dermansky’s grimly humorous ‘Adults at Home’, an underachieving twenty-something is tormented by her insufferable, Grand-Slam-winning younger sister, and I added Dermansky’s novel Twins on my must-read list straight away. Also to my must-read list went Tara McCarthy’s Love Will Tear Us Apart, about a teenage pop duo of beautiful identical twin girls… who just happen to be conjoined at the hip. (They’re pretty mean tennis players too, believe it or not.) In ‘Pubertas Agonistes’ by Jonathan Ames, a teenaged boy suffers from late-onset puberty and quits his tennis team because he’s too ashamed to shower in the locker room.

I enjoyed ‘The Fourth’ by Lee Harrington, about an American thriatlonist who gets a job as an on-call tennis player at a wealthy aristocrat’s villa in Antibes – and finds out that her position is like that of a Victorian governess, not quite one of the servants, and certainly not one of the family. You can read a part of the story on the author’s website; and I’m glad to see it was in fact the beginning of a novel, as the ending felt abrupt and disappointing. Another argument against including novel excerpts in anthologies, surely: where exactly do you begin and end the excerpt?

But my favourite story in the entire book – partly, but not only, because it’s all about tennis – was ‘Match Point’ by Sarah Totton, in which a tennis pro is determined to finish a match though his hand is broken, and highly realistic technical detail is set off by some bizarre elements. I was so intrigued by Totton’s writing I set the book aside to Google her: imagine my shock when I found out she has been published in various literary journals, but there’s not a single short story collection bearing her name. Goes to show how hard it it to break through in this fied, but still, I shake my head in wonder. And wish I were a publisher myself.

Final Verdict: The collection is a little uneven, but contains a few gems and is well worth buying if you’re a tennis fan. (Also, the hardback edition is gorgeous, and will look lovely on your T for Tennis shelf. Just sayin’.) If you don’t like tennis, I can’t really say whether you’d like it or not: if only because I can’t imagine the mental landscape of someone so shockingly wanting in good taste…

This entry was posted on June 29, 2008 by Leena in Entries by Leena, Fiction: short stories and tagged anthology, short stories, tennis.