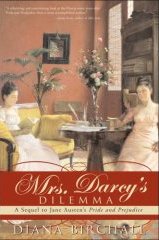 The Austen sequel seems to be a genre of its own nowadays, and surely a tricky one to pull off. A sequel is likely to have little appeal outside the fan community, on the one hand; and to cause disgust and outrage within it, on the other. As a rabid Austenite myself, I was profoundly traumatised by one rotten apple of a Pride and Prejudice sequel (which shall remain nameless) when I was 14, and have been firmly in the ‘disgust and outrage’ camp since then. In fact, since then I haven’t touched another sequel with a ten-foot pole, so I was understandably wary when I was asked to review this one.

Twenty-five years after the events of Pride and Prejudice, Darcy and Elizabeth are a loving middle-aged couple with three grown-up children: Jane, who resembles her namesake aunt; younger son Henry, a likeable and upstanding clergyman; and the eldest son Fitzwilliam, who’s a bit of a dull dog, mostly interested in hounds and horses. The Pemberley household is thrown into turmoil by the arrival of two of Lydia and Wickham’s eight children – who turn out to be two very pretty young women. Mr and Mrs Darcy are worried, and rightly so. Sweet, shy, and bullied by her mother, Cloe falls in love with Henry (strong echoes of Mansfield Park in this plotline), but is determined to become a governess; and the brash, beautiful Bettina… well, it would be more appropriate to ask, what does the brash, beautiful Bettina not do? Following her mother’s footsteps, she disgraces herself and her family by running off with Fitzwilliam – and then, as the couple don’t marry, she disgraces herself even further by going – gasp! – on the stage. Infuriating but plucky, she is perhaps the most interesting and original character in the whole book, though Cloe’s storyline is the Dilemma itself. Everybody likes Cloe, but with a family like hers, how could she possibly be fit to marry a gentleman?

After the very first chapter, I was ready to breathe a sigh of relief. I agree with Simon at Stuck-in-a-Book that Birchall’s love and respect for Austen are obvious from page one, and Birchall writes in convincingly Austenish, well-turned sentences. In her review of The Paradise Will Kirsty wondered why Regency romance writers tend to write in a Heyer-pastiche style – and I agree. But in a book like Mrs Darcy’s Dilemma, I think the Austen pastiche – if done well – is an essential part of the experience. I also agree with Simon that everybody has their own idea of Austen’s characters, so even if you enjoy a book like this, you’ll end up feeling dissatisfied by certain aspects of it. It takes only a bit of Googling to find some readers spluttering in indignation that Darcy and Elizabeth are all wrong, which is inevitable. I personally thought Mr and Mrs Darcy were beautifully done, but was surprised to find Kitty so sour and Lydia morphed into her (now deceased) mother; and Lady Catherine de Bourgh and Mr Collins easily slip into caricatures of themselves. I was delighted by Birchall’s treatment of Mary, however, who I always thought was shortchanged by Austen. This older Mary is a bookish widow who would have felt at home in Gaskell’s Cranford.

This is a very good speculative homage, then. But is a good homage enough to make a good book? At 212 pages, the book is a short, quick read – but it is a bit short on plot, too. The sweet central romance – and even the audacious but compelling Bettina – are both forced into the background while the older generations and gossip about absent friends take centre stage. This is understandable, as most people are reading the book because of the older generations in the first place, but a stronger plot would have served the book well nonetheless. There is a good deal of authentic-sounding dialogue that seems to be there for no other reason than for the pleasure of reading authentic-sounding dialogue. And if it’s done well – why not? But if even the writing of Austen herself isn’t enough to send you into raptures, this probably isn’t the book for you.

I’d love to read another historical novel by Birchall – especially one that has no connection to Austen at all. Without the iconic Elizabeth, Darcy, Lady Catherine, Mr Collins, et al. overshadowing them, the Bettinas and Cloes of the writer’s imagination could really come into their own.

Final Verdict (channelling the Critical Review): Even though one of the characters runs away to be a loose-living actress in London, this sweet book has, for the most part, the kind of strong moral core that ought to make it perfectly acceptable in polite society, and should pose no danger of corrupting influence to young ladies of tender years. For married ladies, Mrs Birchall paints a most exemplary picture of conjugal felicity, and must be commended for presenting domestic life in such an appealing light; – a much-needed corrective, indeed, in these degenerate times.

The author’s website is at www.dianabirchall.net and she blogs at www.lightbrightandsparkling.blogspot.com; and there are other reviews of Mrs Darcy’s Dilemma at:

This entry was posted on June 15, 2008 by Leena in Entries by Leena, Fiction: historical and tagged Diana Birchall, Jane Austen, Pride and Prejudice, Regency.