Book News and “Fox in the City” Update 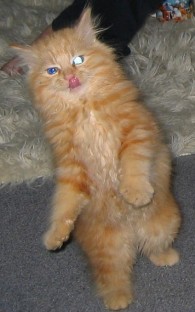 (A dog in last week’s Book News and a mad-looking cat this time).

Right, down to business: It’s a week after Valentine’s Day and love is out the window.

Susan makes the point that:

the everyday falling-in-love/getting married/being married is part of ordinary everyday life but from a fictional point of view is otherwise rather prosaic. There just isn`t anything very interesting to say. The other sort of love, the anguished sort, is so difficult to write about now because, I think, we dare not do so without feeling we also have to write about sex. And that, I maintain, is virtually impossible. It never, ever works. It is either embarrassing, funny or biological.

Elsewhere, thousands of books burned after gunmen attacked the YMCA in Gaza City and blew up the library.

On a more book-loving note, a group of celebrities have agreed to create children’s book Once Upon A Time. They will each write 10 lines before passing the pen to the next contributor. 52 celebs are set to take part, including KT Tunstall, Linford Christie and fashion designer Henry Holland. The book will be read out in an exclusive reading and auctioned to raise funds for the NSPCC.

The Guardian has an interesting top ten Polish books feature, which mentions Gombrowicz (apparently our own RosyB is Gombrowicz’s biggest fan).

The blogosphere responded in their millions (dozens) to our “Fox in the City” feature on book bloggers. Here’s a selection:

In “The Old Blogging/Newspaper Chestnut” Fictionbitch makes the point that as a writer with a small publisher she wants reviews – positive or negative. She concludes that “as it happens I’d rather have a negative review and my book be thus a visible part of literary debate than have it buried in silence.”

In her “Positive Reviewing – a Cultural Error” post, she says:

Perhaps some reviewers are not so concerned with an authors’ feelings but worry rather that a bad review will stop a book selling. This concern is founded on the assumption that anyone reading a bad review will be put off even looking at a book. But it’s a breathtaking patronization of readers to assume that they’ll swallow wholesale a blogger’s views. As some commenters have said, they are often prompted by a bad review to read a book and are not only pleasantly surprised but provoked to write a contradictory, positive review.

Litlove’s Tales From The Reading Room has a brilliant interview with Mark Athitakis, arts editor of the Washington City Paper and freelance book reviewer. An interesting point from Athitakis:

This may be a little pollyannaish of me, but I think that a person who follows book blogs, quick-hit as they are, can easily be attracted to a 5,000-word essay in the New York Review of Books. They’re not separate spheres–they’re two different types of publications that can supplement and inform each other. I don’t think there’s such a person who’s only interested in book blogs.

Mark Thwaite, managing editor of The Book Depository and the online literary journal ReadySteadyBook.com has an article on “Blogging and the ‘common reader‘” He says:

I have to confess that I’m more than rather bemused that the attacks on bloggers, blogs and the blogosphere continues apace. I’m bemused because the attacks are, quite simply, moronic.

Finally, Dorothy at Of Books and Bikes blog has a fabulous and spirited “In Defense of Negativity” post, which attracted dozens of comments. She says:

what I really wanted to say is that it doesn’t make sense to me that bloggers should write only about books they like. No one can stop bloggers from publishing negative reviews, yes, but I also see no reason for them to try to do so. To me personally, it feels dishonest to write only about positive responses, and I’m not sure I’d trust a blogger who never panned a book, ever.

Apologies to all of those freaked out by the cat picture.

6 comments on “Book News and “Fox in the City” Update”

This entry was posted on February 21, 2008 by Lisa in Entries by Lisa, Uncategorized.